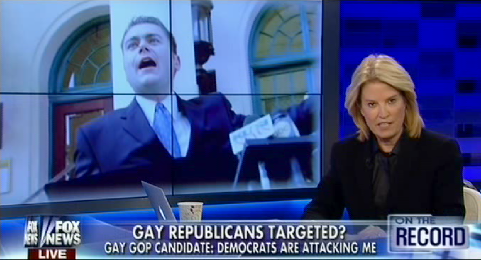 Fox's championing of DeMaio started with an April 28 FoxNews.com column written by The Five co-host Dana Perino, who wrote that DeMaio's story epitomizes “what everyone who fights for equality says they've been fighting for.” Perino also noted that during his unsuccessful run for San Diego mayor in 2012, an anonymous group of supporters of Democratic candidate Bob Filner ran gay-baiting ads showing DeMaio hugging another man and a photoshopped photo showing DeMaio with a drag queen. Perino couldn't point to any other examples of Democratic attacks on DeMaio's sexuality, but she nonetheless seized on the episode to depict “the left” as hypocritical.

While Perino's column implied that a few “far right social conservatives” had also gay-baited DeMaio, she didn't note that among those conservatives are groups like the National Organization for Marriage (NOM), which has endorsed DeMaio's Republican primary opponent and gone after DeMaio for “holding the hand of his gay lover.”

But Fox's pro-DeMaio campaign was just starting up. The candidate appeared on the network's America's Newsroom to decry his progressive critics. On Fox's The Five, co-hosts attacked progressives for putting DeMaio's sex life “front and center.”

And during an interview with DeMaio on the April 28 edition of On the Record, host Greta Van Susteren introduced the candidate by falsely claiming that “it's not social conservatives, but the Democrats” waging anti-gay attacks on his campaign, prompting DeMaio to correct her:

VAN SUSTEREN: Carl DeMaio is a Republican and he is also openly gay, and he says he's coming under attack, not from social conservatives, but from Democrats.

VAN SUSTEREN: You say it's not social conservatives, but the Democrats giving you a hard time. Tell me.

DEMAIO: We do have some social conservatives giving us a hard time, but we're finding a lot more acceptance and tolerance and support from those on the socially conservative side of the spectrum than we are from progressive Democrats. You know, I have an agenda to move our country past social issues. I don't think that we ought to have either political party deciding what happens in the privacy of our bedroom. And, instead, we should demand that Washington refocus its priorities on fixing the national debt, getting our economy going again, and holding government programs accountable for results.

Van Susteren urged DeMaio to describe “how the Democrats have discriminated against you based on your sexual orientation.” DeMaio cited the anonymous ads from the 2012 mayoral campaign and proceeded to criticize national gay groups for not supporting his candidacy - echoing Perino's criticism of groups like the Human Rights Campaign (HRC) and the Gay & Lesbian Victory Fund.

But those groups haven't endorsed DeMaio largely because of his efforts to distance himself from the fight for LGBT equality. DeMaio hinted at his de-emphasis on LGBT issues when he told Van Susteren that he wanted “to move our country past social issues.” Moreover, during his 2012 mayoral bid, DeMaio distinguished between his views on marriage equality as “a private citizen” and what he would do in public office, where he said same-sex marriage wouldn't be a priority. One anti-gay activist endorsed his campaign after DeMaio reportedly assured him that “he would not push the gay agenda issues” as mayor. DeMaio's current opponent, Rep. Scott Peters (D-CA), has consistently backed pro-LGBT legislation.

Groups like the HRC and the Victory Fund could hardly be accused of anti-gay animus, but Fox has repeatedly proved willing to host groups that specialize in malicious anti-LGBT bigotry. For instance, the network regularly hosts Tony Perkins, head of the anti-gay hate group the Family Research Council, an organization that frequently smears gay men as predatory child molesters and has promoted anti-gay attacks on DeMaio. Likewise, Fox has hosted NOM, among DeMaio's chief anti-gay antagonists, to blast marriage equality.

Not only has Fox given a platform to some of the most notorious homophobic groups in the country, but it has itself assailed gay politicians based on their sexuality. After gay Rep. Barney Frank (D-MA) announced his retirement in 2011, the network's Greg Gutfeld said that in his post-congressional life, Frank “will open up a bed and breakfast ... it'll just be beds.” Sean Hannity and Brent Bozell, meanwhile, revived discredited allegations of Frank's involvement in a prostitution ring in the 1980s.

And while Perino's column hailed the history-making potential of DeMaio's candidacy, the network ignored the election in 2012 of Tammy Baldwin (D-WI), the first openly gay senator in U.S. history.

Of course, in Fox's eyes, DeMaio has a key advantage over Frank and Baldwin: he's a Republican. And the fact that liberal and gay organizations aren't backing DeMaio's candidacy gives the network another opportunity to paint progressives as the real bigots - even as Fox has its fingerprints on anti-gay license-to-discriminate legislation and routinely dismisses even basic non-discrimination protections for LGBT people. But if Fox truly has a newfound interest in holding people accountable for anti-gay bigotry, it could start with some of its own employees.