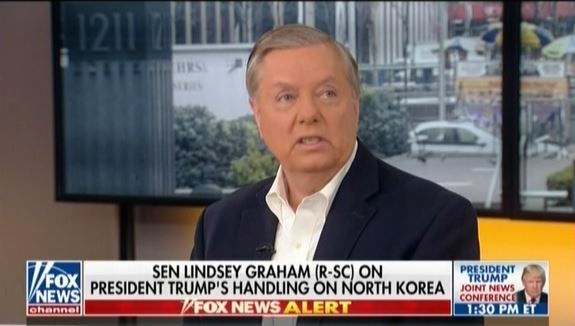 Today, Sen. Lindsey Graham (R-SC) guest hosted Fox News’ Outnumbered, where he repeatedly praised President Donald Trump, made incorrect statements on a range of topics, and offered nuanced takes on foreign policy like, on Iran, “Don't underrate killing them all. That gets everybody's attention." And this was not an isolated thing; Republican elected members of Congress regularly appear as guest hosts on this program.

Every day on Outnumbered, the panel is comprised of four women and one man (aka “#OneLuckyGuy”). While a few of the panelists appear most days, there is some rotation for the other spots. And in just the last eight months, six Republican members of Congress have rotated in for a total of 11 appearances: Rep. Ron DeSantis of Florida (three appearances); Rep. Scott Taylor of Virginia, Rep. Sean Duffy of Wisconsin, and Rep. Lee Zeldin of New York (two appearances each); and Rep. Marsha Blackburn of Tennessee and Graham (one appearance each).

Based on Graham’s appearance today, it’s not hard to see why a Republican member of Congress would want such a cushy gig. Graham spoke longer than any other panelist, expressed political positions that were all generously praised by the other hosts, and faced no serious pushback or challenging follow-up questions to anything he said. He was asked for his opinion on a range of topics, including North Korea, Iran, immigration, the FBI and its alleged misconduct in the 2016 election, Trump's failed nominee for VA secretary, and the 2018 Senate race in West Virginia. Here are some of the highlights (or lowlights) of what he said:

On Iran: “Don't underrate killing them all. That gets everybody's attention.”

Under-stated the federal military budget and over-stated the budget of Social Security, Medicare, and Medicaid. Graham claimed that “Medicare, Social Security, and Medicaid make up almost 75 percent of the debt. You could eliminate the Department of Defense and not even move the debt needle.” Graham not only conflated the federal budget with the debt, he misstated the numbers. In fiscal year 2016, Social Security and the government’s four main health insurance programs -- Medicare, Medicaid, the Children’s Health Insurance Program (CHIP) and Affordable Care Act (ACA) marketplace subsidies -- together totaled 50 percent of the federal budget. Defense and security-related international activities accounted for 16 percent of the budget

Bashed his colleague Sen. Jon Tester (D-MT) for being transparent with the public about serious allegations against Trump’s nominee for secretary of Veterans Affairs.

Called for a second special counsel to be appointed to investigate alleged anti-Trump bias in the Department of Justice and FBI, and made multiple incorrect statements about the FBI’s Trump and Clinton investigations. Among other things, Graham claimed:

Repeatedly praised Trump. Graham gushed over Trump’s handling of North Korea, his take on immigration, and his vision of a revised Iran nuclear deal. He also painted Trump as a victim of the Department of Justice and the FBI. The only thing Graham said about Trump that approached criticism was that Trump “is not helping himself” by threatening Tester.

Outnumbered is billed as one of Fox News’ opinion shows, not as a straight news show. Nevertheless, the fact that Republican (and only Republican) elected officials are given the platform to push their talking points -- which are also part of Fox’s standard fare -- without being challenged is one more data point showing how the network acts as little more than a media wing of the Republican Party.

Correction (1/4/19): This post originally included Sen. Ted Cruz (R-TX) on the list of Republican members of Congress who have guest hosted Outnumbered. In fact, Cruz appeared for just a single interview segment, rather than for the whole hour.