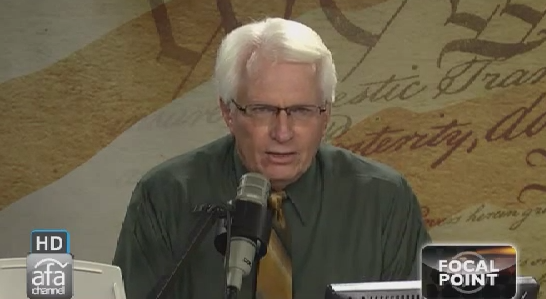 Bryan Fischer, director of issues analysis at the American Family Association (AFA), praised Fox News for its “very friendly” coverage of his organization, which has been designated an anti-gay hate group by the Southern Poverty Law Center.

FISCHER: The Fox network has been very friendly toward the American Family Association in this debacle. Last night on The Kelly File, Sandy Rios of the American Family Association was interviewed by phone.  It was a brief segment but very friendly toward the AFA, critical of what the military is doing. And Todd Starnes went on Fox & Friends this morning. I think Brian Kilmeade was there, Steve Doocy, Ellen [sic] Hasselbeck was there, and again, very friendly venue for him to explain what he had discovered.

The AFA's extreme anti-LGBT record explains its hate group designation. Fischer has declared that “gay sex is a form of domestic terrorism,” called for an “Underground Railroad” to kidnap “innocent children from same-sex parents,” linked homosexuality to pedophilia, blamed gay men for the Holocaust, endorsed Russia's crackdown on gays and lesbians as “homorealistic,” and endorsed keeping anti-sodomy laws on the books. Meanwhile, the AFA's Sandy Rios - a Fox News contributor - has called the murder of gay college student Matthew Shepard a “total fraud” and promoted the discredited claim that “ex-gays” - those who have left the gay “lifestyle” - exist “everywhere.”

A responsible news organization might relegate a group like the AFA to the lunatic fringe, but as Fischer is quick to note, his hate group can count on sympathetic coverage from Fox News