Fox News contributor Ben Carson is slated to keynote an event hosted by the Pacific Justice Institute (PJI) - an anti-LGBT hate group that is notorious for inventing a fake story about a transgender teen harassing people in a public restroom.

In a June 27 email, PJI announced that Ben Carson would be the keynote speaker at its October "Celebration of Justice" event: 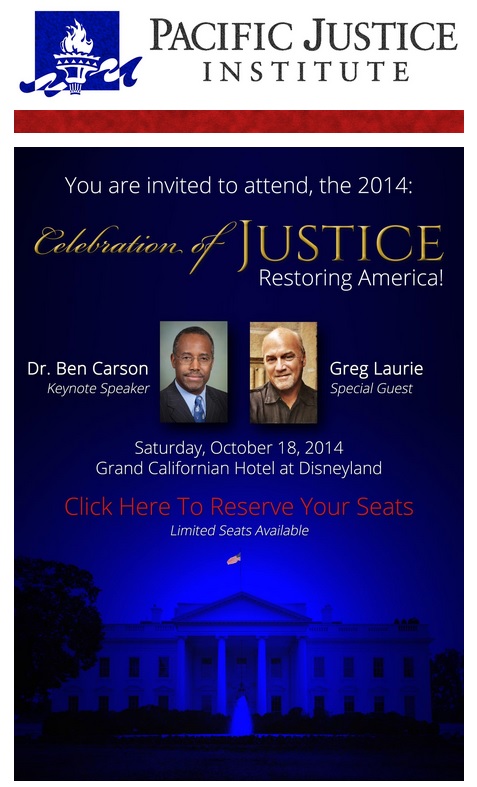 PJI was added to the Southern Poverty Law Center's (SPLC) list of anti-LGBT hate groups in February due to the group's history of extreme and dishonest attacks on the LGBT community. The group has led the charge against even basic protections for LGBT youth, supported harmful “ex-gay” therapy for minors, and is a regular fixture on Fox News.

Last October, while fighting against a measure that would allow transgender students to use their preferred restroom facilities in school, PJI was caught fabricating a bogus story about a transgender girl harassing other students in a women's bathroom. The story was eventually debunked, but the transgender girl cited in PJI's report was placed on suicide watch due to the tremendous amount of negative attention PJI's lie brought her.

Carson's own history of anti-LGBT commentary ignited a firestorm of controversy in 2013. Rather than back away from his extreme positions, Carson seems to have settled for helping raise money for some of the most damaging anti-LGBT groups in the country.