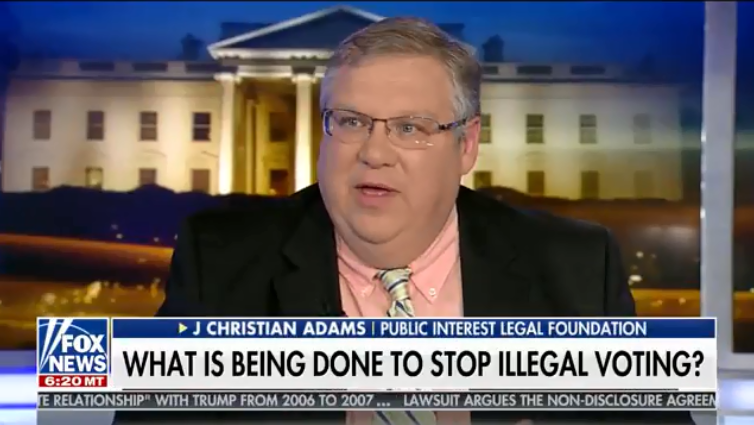 As part of a settlement in a federal lawsuit, J.Christian Adams, a right-wing activist frequently hosted by Fox News as an expert on so-called voter fraud, will apologize to Virginia citizens falsely identified by his organization as noncitizens who had illegally registered to vote.

Adams is a Republican attorney who joined the Justice Department during the notorious era when the George W. Bush DOJ practiced illegal politicized hirings. In 2010, he left government and launched the myth that the Obama DOJ demonstrated anti-white bias in purportedly letting members of the New Black Panther Party off the hook for intimidating white voters during the presidential election.

Adams subsequently rebranded himself as an elections watchdog. He founded a non-profit law firm, Public Interest Legal Foundation (PILF), which sues counties to force them to purge their voter rolls and produces reports warning of the possibility of massive voter fraud. He has frequently appeared on Fox to add a purportedly expert voice to the network’s promotion of such conspiracy theories.

The federal lawsuit Adams’ group is reportedly settling results from a September 2016 report titled “Alien Invasion in Virginia” -- which alleged that its review of data from eight of the state’s 133 counties uncovered “1046 aliens who registered to vote illegally” -- and a follow-up report, “Alien Invasion II,” published the following May.

The reports suggest that ballots cast by undocumented immigrants could have changed the results of recent Virginia elections and called for heightened restrictions on voter registration and voter roll purges that would inevitably lead to voter suppression benefitting Republican candidates.

Election law experts criticized the reports’ assumptions and methodology, pointing out that Adams was likely misinterpreting flawed data. And in April 2018, four U.S. citizens named in the report sued the group in federal court, saying they had been misidentified as noncitizens who illegally registered to vote. HuffPost reported Thursday that “as part of the settlement reached this week, Adams will offer a written apology” and PILF and Adams would “add a statement to the front [of the reports] acknowledging that they falsely accused people of being noncitizens.”

When “Alien Invasion in Virginia” was published -- just weeks before the 2016 presidential election -- right-wing news outlets, including Fox, quickly picked it up.

“Let’s start with, first, 1,046,” said co-host Brian Kilmeade during a “News by the Numbers” segment on the October 3, 2016, edition of Fox & Friends. “That’s how many illegal aliens were found on voter rolls in the crucial battleground state of Virginia. It’s a felony for illegals to vote in that state. However, people are not required to prove their citizenship when they register. Doesn’t sound like a problem, does it?”

Since the lawsuit was filed in April 2018, Adams has appeared on Fox’s weekday programming at least 11 times, according to a review of Media Matters’ cable news guest database.

Indeed, on the evening the lawsuit was filed, Fox anchor Martha MacCallum hosted him on The Story, one of the network’s purported “news”-side programs, but did not ask him about it.