During an interview with the Washington Examiner's Tom Rogan on the Finsbury Park attack in London, Fox News gave two examples of its failure to cover acts of anti-Muslim violence in a responsible way: It used language that portrayed the attacker as a sympathetic figure and the victims as violent, and it went so far as to suggest Muslim victims are responsible for acts of violence by adherents of their faith.

While interviewing Rogan about the June 18 attack outside a Finsbury Park mosque in London, guest host Julie Banderas praised the imam who intervened to prevent bystanders from attacking the suspect. She then told Rogan that the imam’s heroism serves as a “powerful … example” of “those in the Muslim community who condemn any kind of violence in the name of religion” that “many people need to take note of.”

Banderas used the report on the victimization of Muslims for their faith to ask Rogan, “How can Muslim clerics use this to get through to those in their community who have become radicalized?” suggesting Muslim clerics need to account for the behavior of religious extremists. This expectation is consistent with a longstanding trend of conservative media to demand that all Muslims apologize for those who commit violence in the name of Islam. This time, that expectation makes even less sense considering Muslims were the victims of an attacker who followed far-right Twitter profiles and had previously called his 12-year-old Muslim neighbor “inbred.”

Twice in the segment, Rogan mentioned that Muslim bystanders presumably wanted to “lynch” the suspected attacker, an incendiary accusation that has apparently not been reported by any other outlet.* There were individuals hitting and kicking the suspected attacker, but the reference to lynching is extreme language reflecting anti-Muslim tropes that portray Islam as medieval and inherently violent. The second time, Rogan explicitly associated the call to “lynch” the suspected attacker with Muslims when he said the local Muslim community should reflect and say: “They just murdered us for our beliefs, and so we're not going to lynch this individual. We're going to allow the process of secular law -- as is in the U.K., not sharia law, to take hold.” 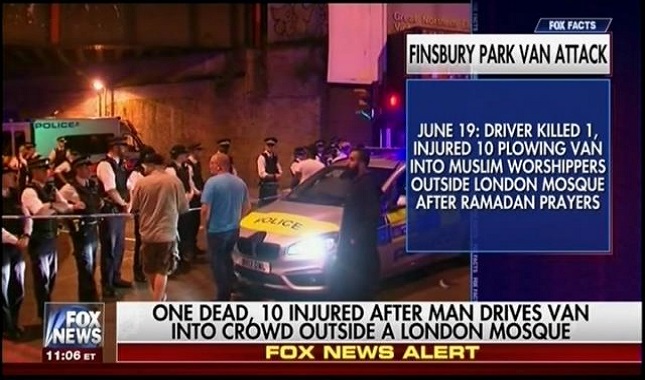 From the June 18 edition of Fox News’ Happening Now:

JULIE BANDERAS (HOST): Let's just talk about this attack, what happened the moments before and then after because, in fact, right after the attack, there was a crowd that had been gathered there after prayer services had let out out of that mosque. Right there on the sidewalk. The crowd tackled the assailant, held him down on the ground until police arrived. And a witness says that the attacker actually shouted, and I’m quoting, “I did my bit. You deserve it.” It's important to note though that it was an imam who actually prevented people from taking revenge on the man, who stopped the crowd from hitting and kicking the attacker. And this serves as a powerful act and example that I think many people need to take note of. Of those in the Muslim community who condemn any kind of violence in the name of religion.

TOM ROGAN: I think think you hit the nail perfectly on the head there. It is absolutely necessary for us to be able to talk about the vast majority -- if there is rot in political Islam, that is why you see more violence from Islamist extremists than say Christian extremists -- and yet, the vast majority of Muslims are decent patriots, well serving. And that is something we need to hold to because those examples of individuals, again, if you talk about there the imam saying, “Don't lynch him.” They are very important, and we must remember that because bigotry doesn't serve anyone.

BANDERAS: How can Muslim clerics use this to get through to those within their community who have become radicalized?

ROGAN: The simple point is that you have to foster more debates. I think that's important. I think in the United States, for example, it's very good when the State Department hosts extremist imams to debate with moderate American imams because that persuades young men. But also, showing this video, saying to people in the local community, “Look, this is proof of what we've done. They just murdered us for our beliefs, and so we're not going to lynch this individual. We're going to allow the process of secular law -- as is in the U.K., not sharia law, to take hold.” So there is a beauty to that, and a universal sort of patriotism that should be vested.

*Note: In a Google News search for “london” and “attack” and “lynch,” Media Matters was unable to identify a single outlet alleging the crowd outside the mosque was calling for the suspect to be lynched.