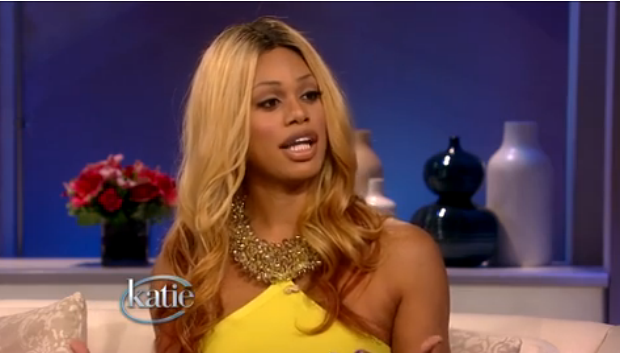 Transgender actress Laverne Cox made waves with a recent appearance on Katie Couric's syndicated talk show, where she pushed back against Couric's fixation on the genitalia of Cox and fellow guest Carmen Carrera, a transgender model. In decrying the objectification of trans people, Cox highlighted a problem that plagues right-wing media coverage of transgender issues.

On the January 6 edition of Katie, Couric repeatedly focused on her guests' gender transitions, introducing Carrera by stating that “she was born a man and that's why she's on our show,” before inquiring whether Carrera's “private parts” are “different now.” Carrera challenged Couric's line of questioning, saying the issue was “really personal” and that “after the transition there's still life to live, I still have my career goals, I still have my family goals.”

Couric pursued the matter further when Cox joined the segment, asking the Orange is the New Black actress for her take on Carrera and Couric's exchange. Cox responded that fixating on trans people's bodies detracts attention from the realities of transgender lives:

Compelling as they were, Cox's words fell on deaf right-wing ears. The Media Research Center's Tim Graham responded by mocking Carrera and Cox's handling of what he called “those uncomfortable wiener questions” and “the bulge issue.” Graham derided the “two men” for believing "[i]t's possible to pretend to be a woman and use a urinal."

Graham's transphobia dovetails with the right-wing media's approach to transgender coverage, characterized by willful ignorance and expressions of derision and disgust. After Army Private Chelsea Manning announced her gender transition in 2013, Fox News mocked her transition as “confus[ing]” and “bizarre.” Fox & Friends ended a segment on Manning's transition by playing Aerosmith's “Dude (Looks Like A Lady),”while one Fox host cautioned viewers not to be “deceived” by Manning's announcement that she's a female.

Fox's response to Manning's announcement fit its pattern of transphobic coverage, which has featured persistent emphasis on trans people's genitalia. After Chaz Bono struggled with a knee injury on Dancing with the Stars, the hosts of Fox & Friends joked about “the one part of Chaz that hasn't been operated on.” Commenting on a transgender beauty contestant, Bill O'Reilly declared in 2012, “She wasn't born that way; she bought all that.” Fox News contributor Stephen Crowder, meanwhile, published a FoxNews.com column in 2013 calling transgender female MMA fighter Fallon Fox a man who liked “beating up women,” before snarking that “Fallon Fox has been using steroids for decades. They're called testicles.” Fox “Medical A Team” member Keith Ablow's commentary on trans people hasn't been any less ignorant. Disregarding the expert consensus on gender identity, Ablow has depicted transgender youth as simply confused. In a 2011 appearance on the network, he misgendered a transgender female child, remarking that “We have two women raising a child. He's adopted. And he's come to believe that he too is female.”

Fox's transphobic coverage stokes a climate of violence and discrimination against transgender people. In regularly depicting trans people as deviant, deceitful, perverted, and ridiculous, the network's coverage contributes to the bigoted view that trans people are legitimate objects of scorn and violence.

Another major right-wing objectifier of trans people is The Daily Caller, whose education editor Eric Owens repeatedly mocks transgender students and obsesses over their private parts. In a November column, Owens blasted a California law granting transgender students appropriate facilities access for “allowing students to use bathrooms and locker rooms that don't match their genitalia.” In a September report on transgender homecoming queen Cassidy Lynn Campbell, Owens saw fit to note that Campbell still has “various male appendages.” Earlier that month, he also let readers know that a transgender student who unsuccessfully attempted to become a homecoming king candidate “still has a vagina.”

The discrimination, intolerance, and brutal transphobia Cox highlighted is enabled by the relentless derision and marginalization of trans people - which, in turn, is made easier by a mocking fixation on their internal plumbing. Cox's appearance on Katie has drawn attention to the perils of such an obsession. The question is whether conservative media will atone for its role in objectifying and dehumanizing trans people.