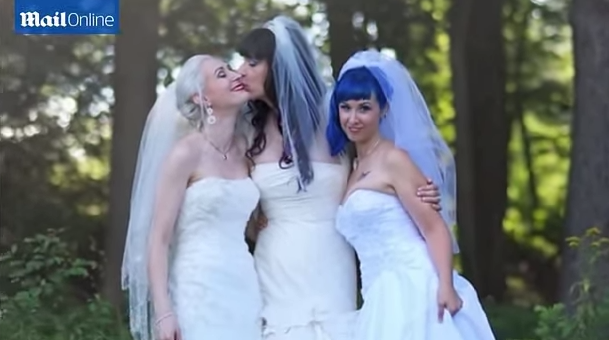 Right-wing media are seizing on the story of a lesbian “throuple” to falsely suggest that legalizing same-sex marriage inevitably leads to the acceptance and legalization of polygamy.

On April 23, the New York Post reported that Doll, Kitten, and Brynn Young, three Massachusetts women in a polyamorous relationship, were expecting their first child after uniting in an August 2013 commitment ceremony. Conservatives pounced on the story as evidence that once the institution of marriage is made available to gay couples, polygamy is a logical consequence.

Fox News' Todd Starnes set the tone for the right-wing reaction to the story with an April 23 Facebook post declaring that "[w]hen you redefine marriage - it's anything goes": 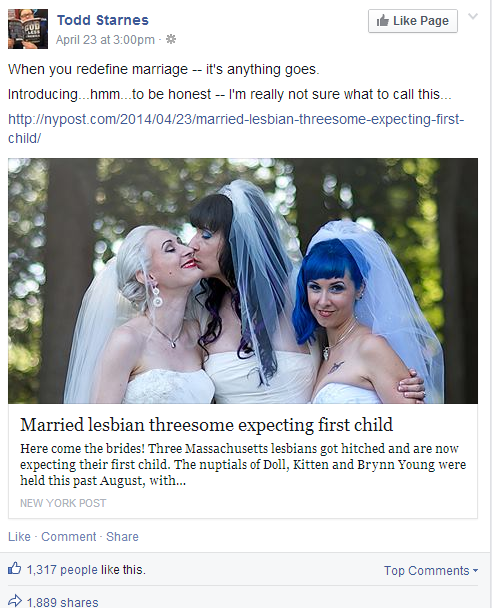 Erick Erickson's RedState.com offered a similar take, with contributor streiff calling polygamy “the logical and foreseeable consequence” of the push for marriage equality, which the post argued made marriage “a means for satisfying the libido.” Likewise, the National Organization for Marriage (NOM) predicted a rash of similar stories “in the wake of same-sex 'marriage.'”

Writing for First Things, NOM co-founder Robert George asserted that seeing marriage as a “sexual-romantic companionship” rather than a “conjugal bond” formed to produce children left no good reason to oppose “polyamorous sexual ensembles of three or more persons.” Similarly, right-wing website LifeSiteNews wondered whether the throuple's story portended “the next marriage redefinition.”

In the National Review's estimation, the throuple's story is but the latest example of how “same-sex marriage is turning marriage into a joke,” while the Washington Times editorial board used the story to bemoan not only same-sex marriage, but also the Supreme Court's 2003 decision striking down state bans on gay sex.

Moreover, countries that have legalized same-sex marriage haven't moved to legalize polyamorous unions. Canada - where same-sex marriage has been legal since 2005 - recently affirmed its own ban on polygamy, while Massachusetts, where the lesbian throuple live, hasn't legalized the practice 10 years after marriage equality came to the state.

That's largely because there's a big difference between homosexuality - an immutable characteristic of one's identity - and polygamy - a practice. Additionally, while studies demonstrate that same-sex parents are just as good as heterosexual parents, polygamy is demonstrably harmful to children.

Of course, anti-LGBT conservatives are determined not to let such facts get in the way of their horror stories. They're not interested in a factual discussion of same-sex marriage and its consequences or the real families that would benefit from its legalization.