The Senate Health, Education, Labor, and Pensions (HELP) Committee passed the Employment Non-Discrimination Act (ENDA) in a historic, bipartisan 15-7 vote on July 10. The bill, which would ban employment discrimination based on sexual orientation or gender identity, received no coverage on Fox News and CNN, even as those networks obsessed for weeks over the yet-to-be-born baby of Prince William and Kate Middleton.

Senate Committee Approved ENDA In Bipartisan Vote. On July 10, the Senate Health, Education, Labor & Pensions Committee passed ENDA in a 15-7 vote. According to the Washington Blade:

A Senate committee made history on Wednesday by approving for the first time a trans-inclusive version of the Employment Non-Discrimination Act and picking up key Republican support from Sens. Orrin Hatch (R-Utah) and Lisa Murkowski (R-Alaska).

Lawmakers on the Senate Health, Education, Labor & Pensions Committee reported out ENDA by a 15-7 vote after a short period of discussion. No amendments were offered except for a manager's amendment, although Sen. Lamar Alexander (R-Tenn.) said he'll reserve three that he planned for consideration on the Senate floor. [Washington Blade, 7/10/13]

Committee Vote Marks The Furthest ENDA Has Advanced In The Senate In 17 Years. In the wake of the HELP Committee's vote, Mother Jones reported:

In the shadow of the marriage equality debate, the Employment Non-Discrimination Act (ENDA), which would protect LGBT workers from workplace discrimination, has been languishing in legislative obscurity for almost 20 years. But on Tuesday morning, the ENDA passed the Senate Health, Education, Labor and Pension Committee by a 15-7 vote, marking its furthest advancement in the Senate in 17 years and potentially correcting a glaring oversight in LGBT rights. [Mother Jones, 7/10/13]

National Center For Transgender Equality: HELP Vote Is A “Huge” Milestone. According to the Los Angeles Times:

Mara Keisling, executive director of the National Center for Transgender Equality, said the vote was “huge,” and the farthest that the bill, first introduced in 1994, has advanced in Congress in 17 years.

“It's mostly because of people coming out to their families, reporters and churches,” Keisling said. “Everybody knows a gay person now, and more and more people know a trans person. It's an issue that 20 years from now, opponents are going to be ashamed to have opposed.” [Los Angeles Times, 7/10/13]

Fox News, CNN Ignore ENDA While Devoting Copious Coverage To The “Royal Baby Watch.” According to an Equality Matters analysis, between June 30 and July 13, Fox News and CNN gave ENDA no coverage leading up to or following the committee vote, but did devote numerous segments to the impending birth of the Duke and Duchess of Cambridge's child: 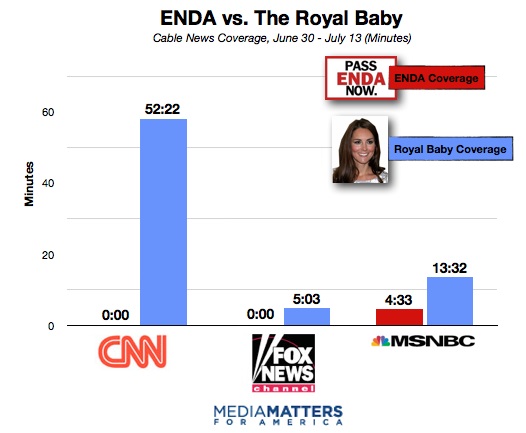 CNN, Fox Produced Zero Segments On ENDA. . According to an Equality Matters analysis, MSNBC was the only cable news network to devote a news report or segment to ENDA's progress in the Senate: 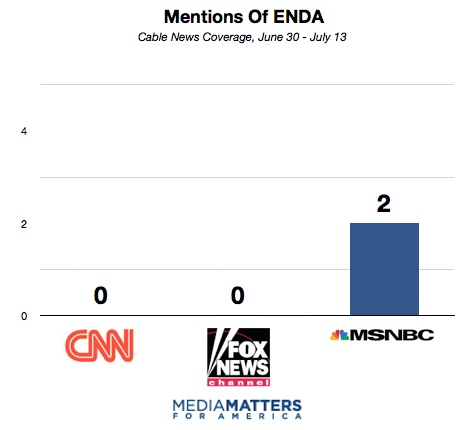 A new poll from the Center for American Progress shows that the American public strongly supports workplace nondiscrimination protections for gay and transgender people.* This support comes at a time when new research shows just how much dis- crimination and harassment this population faces on the job.