Fox News' Todd Starnes has never shied away from aligning himself with some of the more extreme and fringe elements of right-wing politics. He's flirted with "birtherism," made inflammatory comments about Muslims and African-Americans, and accused the Obama administration of launching a war against Christianity.

Over the past few months, it appears that Starnes has taken up a new cause – using his position as a Fox News Radio reporter to give a voice to some of the country's worst anti-gay hate groups

Ties To The Family Research Council

Last December, Starnes appeared on the American Family Association's (AFA) “Today's Issues” radio show to promote his Fox News website, ToddStarnes.com. He was joined by Tony Perkins, president of the Southern Poverty Law Center-designated anti-gay “hate group” Family Research Council (FRC). During the segment, Starnes claimed that his website would act as a hub of "culture war stories" that would depict hate groups like FRC and AFA in a positive light:

STARNES: This is sort of a place in the Fox family, the Fox News family, that folks can go and find those culture war stories that we cover.... These are stories that resonate with patriotic, God-fearing, God-loving Americans. And I think when people see the stories in one spot, they really understand what's at stake and how thankful we are that there are organizations like the Family Research Council and American Family Radio that cover these issues. [emphasis added]

Perkins was thrilled, to say the least. He said he was “encouraged” by Starnes' reporting, praising him for "giving voice" to social conservatives who believe that Christianity is under attack:

PERKINS: That's the kind of stuff we like to see. And, this is what I think happens when these issues are talked about. Because in isolation, people think 'oh well, we're all by ourselves" and so they usually back down... But when people realize 'hey, this is a connected effort,' and 'we're not alone,' and people are standing up, it has an encouraging effect to it. And that's why I appreciate the work that you're doing, Todd. I know you're just reporting, but what you're doing is you're giving voice to a lot of Americans out there who are deeply concerned about the direction of this country and in particular this attack on Christianity. And I for one am encouraged by that. [emphasis added]

Starnes was serious about his pledge to mainstream and promote FRC. Since his AFA radio appearance, Starnes has frequently included comments from FRC spokespersons – including Perkins, Peter Sprigg, and Ken Klukowski – in his reporting.

Earlier this week, he published an article about a rainbow flag being raised in a U.S. military base – a story, Perkins spotlighted in his Washington Update just a few days earlier. Unsurprisingly, Starnes' article was littered with quotes pulled directly from Perkins' FRC update.

Starnes has also repeatedly tweeted about his professional relationship with Perkins, even calling the hate group leader a "patriot":

Starnes has also made good on his promise to highlight stories that “resonate” with social conservatives. When he's not manufacturing silly anti-Obama commentary, Starnes centers his reporting on stories that depict LGBT equality as a threat to religious and personal freedom. Here's a quick survey of some of Starnes' recent headlines:

Starnes' coverage of LGBT issues ranges from misleading to wildly inaccurate, but they have one thing in common: they're all framed to gin up right-wing fears about the LGBT community and its alleged agenda.

Given his close relationship with one of the country's most prominent anti-gay hate groups, it isn't surprising that Starnes harbors some personal animosity towards the LGBT community.

In a November 9 post on his Facebook page, for example, Starnes mocked the television show Glee for an episode featuring “underage gay sex,” writing:

For the sake of diversity, I wonder why GLEE doesn't feature a Transgender Lactose Intolerant, Muslim Midget?

Starnes has also warned that proponents of marriage equality might eventually try to make “traditional marriage” a hate crime: 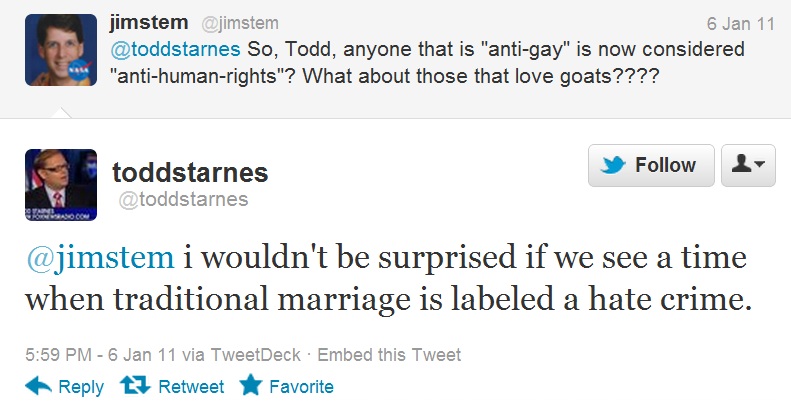 The most obvious examples of Starnes' anti-LGBT animus can be found in his recently published book, titled Dispatches from Bitter America: A Gun Toting, Chicken Eating Son Of A Baptist's Culture War Stories. Describing his book, Starnes said:

It's a collection of stories from my travels across this country – conversations I've had with regular folks who have deep concerns about the direction we are going as a nation.

Dispatches describes a number of events that Starnes sees as representative of America's alleged “culture war.” Though much of the book is intended to be comical, several passages reveal Starnes' less-than-funny attitude toward the LGBT community.

Homosexuals are on the warpath in Vermont. They want state lawmakers to defund the annual Veteran's Day Parade because it's hosted by the Boy Scouts. The gay-rights crowd said the Scouts should not receive a dime of state money because the group is “discriminatory.”

We're not talking about a lot of money, folks – about $7,500 – but the homosexuals remain adamantly opposed, even if it means cancelling the state's annual Veteran's Day Parade. [emphasis added]

Welcome to the United States of America – where the men are women, the women are men, and the rest of us are just plain confused.

As we take these early steps into the twenty-first century, there are growing signs we may be moving into an age of a genderless society. In the coming years you can expect the words “gender neutral,” “gender variant,” and “gender queer” to be added to our culture war lexicon. They've even got a pronoun lined up for us to use – “ze” – as in “Ze is neither he nor she.”

Honestly, folks, I just don't know what to make of the coming genderless society. I long for the old days when God handled the business of creating man in His image. Those were grand times, weren't they? God created our “inward parts,” is how the Bible describes it. He knit us together in our mothers' wombs. We were “remarkably and wonderfully made.”

But this is the twenty-first century, and mankind has decided they know how to improve the product. Between you and me, I'd love to be a fly on the wall at the pearly gates on rapture day when all these folks have to explain why they've got extra parts the original models didn't have. [emphasis added]

The new homecoming queen at The College of William and Mary is a mary. Students have elected a transgender homecoming queen. Jessee Vasold was crowned during halftime of the Virginia school's football game against James Madison. Vasold prefers to be called “genderqueer.”

For those of you who grew up when God only created men and women, genderqueer means William and Mary's homecoming queen has all the commensurate body parts of a king. Genderqueer people apparently don't adhere to either strictly male or strictly female gender roles.

University officials are just tickled pink to have a genderqueer homecoming queen. “William and Mary is a diverse and inclusive community, and student selections to this year's homecoming court reflect that,” school spokesman Brian Whitson told local newspapers in an e-mail. If that's the case, William and Mary must be home to an unusually large number of genderqueer students.

Whoever said homecoming dances are a drag? [emphasis added]

It's hard enough learning about the birds and bees; now American school children are going to have to learn about gay penguins. It's all part of a global effort to teach kids about homosexuality, using buzz words like anti-bullying and tolerance. But to many parents and teachers, it sounds like indoctrination.

But in the quest to be pro-gay, have schools become anti-straight?

Lawmakers in Sacramento passed a landmark bill that would require students to take mandatory gay history classes. Supporters say it's the only way to counter anti-gay stereotypes and beliefs that make children in those groups vulnerable to bullying and suicide.

If that's the case, then when will schools start offering mandatory straight history classes?

[I]t seems to me that some activists within the gay-rights movement are interested in something else. Special protection under the law is not good enough. They want to force you to change your way of thinking – twenty-first-century thought police. They want to attack religious beliefs that conflict with their own. [emphasis added]

Considering the anti-LGBT overtones of Dispatches, it's fitting that the book boasts a glowing review from – you guessed it – FRC's Tony Perkins:

Starnes' background of open resentment toward the LGBT community should be enough to raise questions about his ability to remain neutral when reporting on “culture war” stories. His explicit pledge to promote and mainstream a notorious anti-gay hate group seriously undermines his journalistic integrity, as well as the integrity of the network that employees him. Writing anti-gay fluff pieces might make Starnes a trusted ally of groups like FRC, but it doesn't make him a reporter worthy of being taken seriously.