Fox News reporter Shannon Bream has become a reliable proponent of right-wing efforts to discriminate against LGBT people, using her national platform to validate religious extremists who claim that any LGBT protections infringe on religious liberty and freedom of speech. “This Is About Right And Wrong, Unwavering Absolutes”

Before joining Fox News in 2007, Bream practiced corporate law in Tampa, FL. In 2000, she left her legal career to pursue journalism, eventually getting noticed by Fox News' Brit Hume. She joined Fox as the network's Supreme Court reporter and is the host of Fox's Sunday show America's News Headquarters.

Bream is also a devout Christian who claims to have been inspired by the work of the notoriously homophobic conservative activist Jerry Falwell. Bream attended Falwell's right-wing Liberty University for her undergraduate degree, and in May of 2013, she became the first woman to deliver the keynote address at her alma mater's commencement ceremony.

During her speech, Bream urged the graduating class to live a life guided by the kind of Christian principles espoused by Falwell, challenging them not to “stand silently” as their “most deeply held beliefs are being questioned in the public square”:

Now is not the time to stand silently by as your most deeply held beliefs are being questioned in the public square. Speaking up is rarely easy when the world is actively waiting to discredit and misconstrue what you have to say. But we have Christ as our model. He didn't care what others thought of him. He hung out with prostitutes and tax collectors. He loved them, never condemning them but also never condoning their sin. He spoke boldly and unapologetically in a way that made him a very unpopular guy and ultimately cost him his life. We are not called to live some kind of watered-down version of that truth. In fact, it is just the kind of life the Dr. Jerry Falwell I knew would expect his Liberty grads to live. [emphasis added]

Bream went on to urge the graduating class to fight against “religious oppression” while “never backing down” from “scriptural absolutes”:

Not talking about politics, and I personally don't care what party you do or don't belong to. This is about right and wrong, unwavering absolutes, respecting life, loving our neighbors, yeah, as much as we love ourselves, purging our lives of the secret sins that we've convinced ourselves is just no big deal, living in humility, defending those who cannot defend themselves, fighting to end religious oppression against men and women and children all across the globe and never backing down from the scriptural absolutes we must stay tethered to. [emphasis added]

Bream also called on her audience to bring their fight for religious liberty into their workplaces, asking, “if we don't, if you don't, who will?”:

Now along with religious liberty, one of the most important things our country has granted from its inception is freedom of speech. There are ways to disagree without compromising, to debate without annihilating each other, but it requires us to know what we believe and why. There are men and women who have fought and died for those freedoms, our very brave service members, and we must never allow the lives sacrificed in pursuit of the goals of liberty and freedom for all to be forgotten or in some way diminished because we are fearful of taking up the cause into our homes and our workplaces, whatever our sphere of influence. If we don't, if you don't, who will? [emphasis added]

Bream's comments offer a glimpse into the kind of narrative she's been working to promote at Fox News, where she's consistently given airtime to right-wing religious extremists and hate group spokespersons who claim their free speech and religious liberty are threatened by even the most basic protections for LGBT people.

San Antonio's city council became the target of right-wing, anti-LGBT outrage over the summer as it considered an ordinance that would expand the city's non-discrimination protections to include sexual orientation and gender identity.

On Fox News, Bream led the effort to depict the measure as an assault on religious free speech. During the July 31 edition of America Live, Bream incorrectly warned that the ordinance posed a "First Amendment rights issue," potentially blocking the hiring of “anyone who speaks out against homosexuality because of their moral or religious beliefs.”

Days later, Bream hosted another segment - this time complete with an intro slide announcing "THE FIGHT FOR FAITH" - during which she suggested that the non-discrimination ordinance might be an example of “reverse discrimination”: 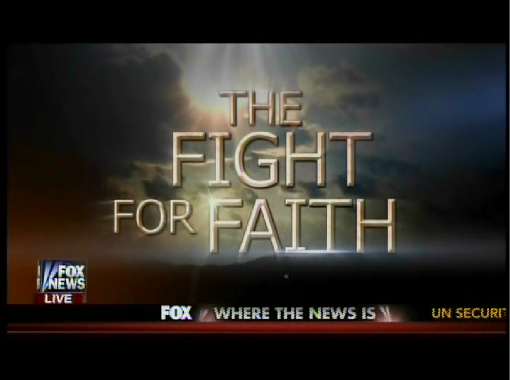 Bream invited right-wing San Antonio pastor Steven Branson for a one-sided interview in which they both criticized a provision of the measure which had been removed for more than a month at the time of the interview. Bream failed to correct Branson when he falsely suggested the ordinance lacked exemptions for religious organizations, and she ended the segment by warning:

First Amendment, very important, we've got to keep fighting for it here in this country.

And on August 27, just days before the city council voted to approve the ordinance, Bream invited Peter Sprigg, spokesman for the anti-gay hate group Family Research Council (FRC), for yet another one-sided interview in which she echoed fears that the measure might be “the first step to banning Christian conservatives from holding public office.” Bream failed to mention that her guest has a history of making wildly exaggerated claims about the dangers of LGBT equality or that he had previously suggested exporting gay people out of the United States.

Bream's fact-free campaign against San Antonio's non-discrimination ordinance is a textbook example of how she approaches broadly attacking LGBT equality on Fox, including relying on hate group spokespersons to depict blatant acts of discrimination as a form of religious speech.

Working at Fox has given Bream the opportunity to take her crusade against perceived threats to religious freedom to new heights. With easy access to a network of anti-LGBT spokespersons at her disposal, Bream is free to make sure that every advancement for LGBT equality is turned into a religious liberty horror story.