The Pacific Justice Institute (PJI) is a California-based anti-gay group that was recently caught fabricating a story about a transgender student harassing other students in a female restroom. The revelation is just the latest in PJI's history of manufacturing horror stories about efforts to protect LGBT youth in California schools - stories that are regularly touted on Fox News.

What Is The Pacific Justice Institute (PJI)?

While PJI bills itself as a generalist religious liberty advocacy  group, the organization specializes in combating efforts to protect LGBT youth, especially in California's public schools. Since its inception, PJI has worked to stifle even the most modest efforts to make schools more welcoming environments for LGBT students, including:

PJI's focus on LGBT youth is likely a product of Dacus's leadership. According to a 2009 profile on the group in the East Bay Express:

Such issues are of special interest to the institute and Dacus, who with his wife Susanne is the author of a book informing public-school teachers, students, and parents of “strategies to practically and legally evangelize your school.” Titled Reclaim Your School, the book calls separation of church and state “the big lie” and covers everything from pastor visitations to special school-hours Bible study through which, Dacus writes, “a large number of students ... make commitments to receive Christ by the end of the year.” [emphasis added]

Dacus gained notoriety during the 2008 battle over California's Proposition 8. While acting as an official spokesman at a “Yes on 8” rally, Dacus was filmed comparing the defeat of marriage equality to the defeat of Nazi Germany:

Since then, Dacus has become a mainstream voice of anti-LGBT fear mongering, peddling his beliefs to whatever major news outlet will have him. His commentary ranges from mere conservative misinformation - like claiming that overturning the Defense of Marriage Act (DOMA) might legalize incest - to outright homophobia and transphobia. He's called homosexuality “dangerous” and “destructive,” claimed that “ex-gay” therapy is necessary to save youth from a "path of death and destruction," and asserted that LGBT History Month is a "serious propaganda month" to “market homosexuality” to young children.

PJI And The Big Colorado Lie

PJI's history of ginning up controversy where none exists is extensive, but few of the organization's lies have been as egregious as its most recent attack on a transgender Colorado high school student.

In August, PJI was working desperately to defeat a California law that would allow transgender public school students to have access to facilities and sports teams that corresponded to their gender identity. Throughout the debate over the bill, PJI warned that the measure would jeopardize students' safety and privacy rights by allowing boys to enter into the girls' bathroom and vice versa:

“As a society, we know we must protect children from harm, but this law is in direct violation of that principle,” said Brad Dacus, President of Pacific Justice Institute. “These politicians have disregarded the safety and privacy of all children, in exchange for appeasing the vocal LGBT lobby,” Dacus continued.

Following the law's passage, PJI launched a petition to repeal the measure, once again warning that students' well-being was at stake.

The problem with PJI's warning was that it wasn't supported by the evidence. The Los Angeles Unified School District had enacted a similar policy for almost a decade with "nothing but positive results." Other California school districts with similar policies had experienced "no single reported incident of any misconduct."

Try as it might, PJI just couldn't find any examples of a transgender student behaving inappropriately in a school restroom.

On October 10, the group issued a press release declaring that its “nightmare” predictions had come true - a transgender Colorado teen was making “sexually harassing comments” towards girls in the women's restroom:

“This is a nightmare scenario for the teenage girls--some of them freshmen--and their parents at this school,” noted PJI staff attorney Matthew McReynolds, who sent the letter to Principal Brian Schipper and Superintendent Rhonda Vendetti. "This is exactly the kind of horror story we have been warning would accompany the push for radical transgender rights in schools, and it is the type of situation that LGBT activits [sic] have been insisting would not happen."

Parents at the school, located near Colorado Springs, became irate when they learned that a teenage boy was entering girls' bathrooms and, according to some students, even making sexually harassing comments toward girls he was encountering.  When the parents confronted school officials, they were stunned to be told the boy's rights as a self-proclaimed transgender trumped their daughters' privacy rights. [emphasis added]

The story was quickly picked up by conservative media outlets, which predictably cited the incident as proof that conservatives had been right about transgender students all along.

Noticing the lack of evidence to support PJI's story, Cristan Williams, a reporter at The TransAdvocate, decided to speak directly with Superintendent Rhonda Vendetti to verify if the claims of harassment were true. According to Vendetti, PJI's story was based on the complaint of an angry parent, not an actual report of harassment:

Following Vendetti's remarks, The Daily Mail took down its article about the incident. A writer for the Examiner, who initially called the incident a “travesty,” published a thoughtful redaction for his initial coverage of the story, “profusely” apologizing for failing to fact check PJI's claims and “falsely accusing a transgender student.”

When confronted with the facts, PJI all but admitted to fabricating the story of harassment, telling The TransAdvocate:

It is our position that the intrusion of a biological male into a restroom for teenage girls is inherently intimidating and harassing. We have received additional reports of particular incidents of harassment, and we are working to corroborate those reports. In our letter, we specifically asked the school to notify us immediately if they disputed any of the factual allegations. To date, they have not done so. The core of this story -- that the school is elevating the rights of one self-proclaimed transgender student while minimizing the privacy rights of all the biologically female students, has not been seriously controverted. We encourage journalists to continue their important work of investigating the details of this story independently and not simply accepting the statements of either side, and certainly not pulling their stories simply because activists demand this story be silenced. [emphasis added]

PJI has since attempted to further clarify its allegations, still failing to provide any evidence to support its claims of harassment. The goal all along has been to invent a horror story that can be used to collect signatures to repeal California's student policy. Meanwhile, the transgender girl being accused of harassing other students in the school restroom was placed on suicide watch due to the tremendous amount of negative attention PJI's fabricated story brought her.

One of the conservative news outlets that touted PJI's fake transgender story without fact checking it was Fox Nation, which uncritically linked to a Christian Broadcasting Network article about the incident: 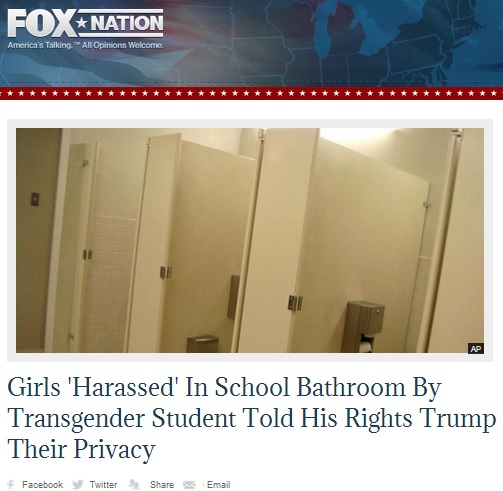 This is not the first time Fox News has relied on PJI to act as a reliable source of conservative misinformation about California's protections for LGBT youth. During the initial debate over the state's law regarding transgender students' use of school facilities, Fox aired a segment featuring Dacus, who warned that the measure "grotesquely violates" the security interests and needs of students.

In July of 2011, Fox relied on Dacus to attack a law that would require public schools to include discussions of LGBT history in their curricula, falsely asserting that the law would cause schools to focus on what historical figures "did in the bedroom."

When Fox was attacking California for considering a law that would enhance workplace protections for transgender people, Dacus asserted that the law would allow employees to change their genders from week to week.

And during a multi-segment attack on a California school's diversity lessons, Dacus accused the school of promoting “indoctrination” and encouraging "gender confusion" among students.

Fox News has never been ashamed of cozying up with some of the country's most harmful anti-LGBT groups, so the network's willingness to provide a platform for PJI's talking points might seem like a given. But inventing a fake news story about a transgender student doesn't just make PJI shameful - it should disqualify the group from being taken seriously by any major news outlet. The question is: will Fox continue to provide the discredited organization with airtime now that PJI has been caught lying in order to score political points against the LGBT community?