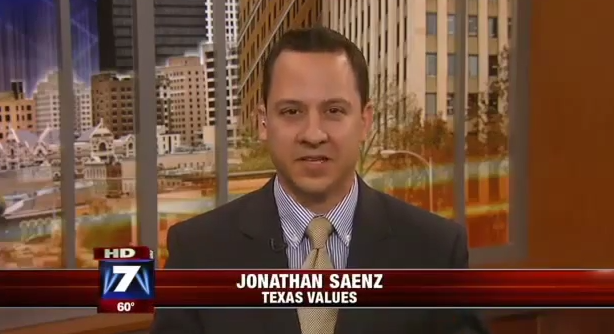 In the thick of virtually every hot-button cultural battle to engulf Texas  in recent years has been Jonathan Saenz - the president of a lobbying group called Texas Values, a regular spokesman for right-wing causes in local media, and a rabidly theocratic, anti-LGBT extremist.

This May, during the debate over Houston's Equal Rights Ordinance - a measure that prohibits discrimination based on characteristics including sexual orientation, and gender identity - Saenz emerged as a leading voice against the proposal in local media. Local news outlets described him as an attorney or social conservative, obscuring the extremist worldview that undergirded his fight against the ordinance.

With an effort underway to repeal the ordinance, which Houston's City Council passed eleven to six on May 28, Saenz is certain to remain in the spotlight as the fight over its LGBT protections continues.

Saenz's group, Texas Values, is the lobbying arm of the Plano, TX-based Liberty Institute, an organization notorious for peddling discredited stories about supposed threats posed by government and progressive activists to religious liberty. Upon Texas Values' launch in 2012, Saenz became its founding president, following a stint as Liberty Institute's top lobbyist in Austin. Texas Values' biography of Saenz notes that he “has been featured in local, national, and international media” including cable networks Fox News and CNN, where he has discussed such topics as school prayer and Texas conservatives' effort to remake the state's social studies curriculum.

But those media appearances only hinted at the far-right vision informing Saenz and Texas Values' work.

Much of Texas Values' work centers on its fight against LGBT equality, which includes opposing even basic protections for LGBT people:

Texas Values also beats the drum of a litany of typical right-wing social causes. The group opposes comprehensive sex education in schools and has attacked Democratic gubernatorial candidate Wendy Davis for her support for reproductive rights and the gay "anti-family agenda,"

The group also pushes the tired right-wing myth of a “war on Christmas” - but with a distinctly conspiracy-minded fervor. According to the group, that “war” is “a key front in the radical movement to remove all religious expression from the public square” and to create a world in which children are too afraid to even talk about Christmas at school.

But Texas Values fear mongering about a “radical movement” aimed at purging Christianity from public life pales in comparison to Saenz's extreme views on the separation of church and state. To hear Saenz tell it, such a separation doesn't even exist.

In 2010, conservatives on the Texas Board of Education implemented new social studies standards that heralded American capitalism, cast doubt on the founders' vision of a secular republic, and promoted teaching of “the conservative resurgence of the 1980s and 1990s, including Phyllis Schlafly, the Contract With America, the Heritage Foundation, the Moral Majority and the National Rifle Association.” Saenz, then Liberty Council's director of legislative affairs, was a prominent supporter of the conservatives' revamped standards, calling it "untrue and factually and historically inaccurate" that the Constitution separates church and state.

Saenz's effort to turn public education into a training program from Christian fundamentalism doesn't end there. Saenz lambastes evolution as a “left-wing ideology” that “any respectable scientist” should see through. It's clear, then, that he doesn't hold the scientific community in much esteem; in September 2013, Saenz went after evolution supporters on the Texas Board of Education for wanting to “bow down to the scientific community.” He's also a strong proponent Bible classes in public schools, accusing opponents of such classes of being "enemies of religious freedom."

But Saenz's concern for religious sensibilities doesn't extend to Muslims. In September 2010, the Texas Board of Education passed a resolution calling on textbook publishers to limit references to Islam, ostensibly to combat the stealth influence of Middle Easterners in textbook publishing. Saenz lauded the resolution as “doing the right thing ... to prevent any type of religious discrimination or treat any religion in a way that's incomplete.” Interfaith clergy members weren't as impressed, condemning the resolution as “inflammatory” and “unwise.”

Saenz has been similarly extreme and inflammatory in his campaigns against even basic protections for the LGBT community.

While campaigning against Houston's Equal Rights Ordinance, Saenz repeated the thoroughly debunked right-wing myth that sexual predators would exploit the ordinance's gender identity protections to sneak into restrooms and "terrorize women and children."

Saenz made the same argument when lobbying against a similar non-discrimination measure in San Antonio, warning that the proposal would “allow men into women's restrooms” - a claim that PolitiFact Texas rated "false." Like other right-wing opponents of San Antonio's ordinance, Saenz baselessly framed the measure as an attack on Christians, warning that the ordinance would be wielded as “a weapon against people of faith and family values.”

His crusade against Houston's Equal Rights Ordinance relied heavily on an attempt to drive a racial wedge between supporters and opponents of the proposal, making sure to note on numerous occasions that there were Latinos and African-Americans who opposed the ordinance:

In keeping with his pattern of assailing LGBT rights as a threat to religious liberty, Saenz championed Arizona's notorious SB 1062, a law that would have protected business owners who refuse service to LGBT customers, falsely suggesting that the measure was needed to prevent churches from being forced to perform same-sex weddings.

When he's not working to thwart even basic protections for LGBT people, Saenz promotes a number of tired and ridiculous myths about LGBT people. Saenz has peddled the bogus “slippery slope” argument against marriage equality, arguing that allowing gay and lesbian couples to marry will lead to “polygamy and polyandry” and potentially to people marrying their stepchildren.

He's also a vocal proponent of harmful ex-gay therapy, which he claims is based on valid science. Indeed, Saenz's solution to the existence of gay people is to tell them that “it's never too late” for them to “change.”

Saenz's fact-free approach to combating LGBT equality is symptomatic of his broader unwillingness to be confronted with facts, evidence, and even lives that don't comport with his myopic view of the world.

He's not just a “social conservative;” he's a man whose career is defined by a penchant for using inflammatory rhetoric and outright misinformation to demean the LGBT community.

Texas and national media outlets would do well to identify him accordingly.