Today, Fox Nation, Fox News' website, is celebrating one year since its launch. 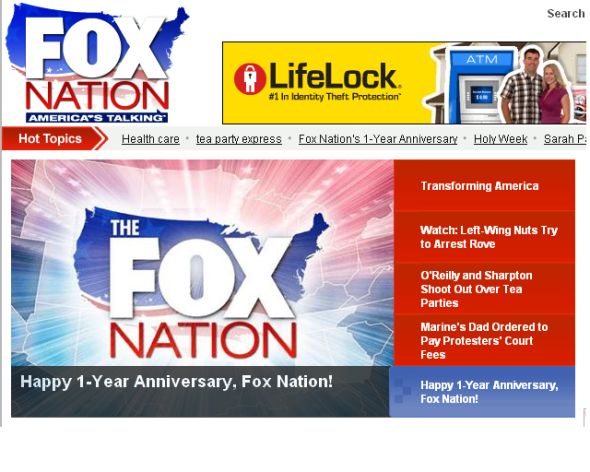 Here are just a few of the things we've learned from Fox Nation in the last year:

Fox Nation has promoted the falsehood that reconciliation is the “nuclear option. From Fox Nation's homepage:

Fox Nation joined other conservative outlets in suggesting that including GOP health care ideas was a gimmick. From Fox Nation's homepage: Promoting the Tea Parties is acceptable activism for a news site Discussing President Obama's recent medical check-up, which reportedly noted that Obama “has not kicked the smoking habit,” Fox Nation posted a doctored photo of Obama with a cigarette dangling from his mouth. As the Museum of Hoaxes notes, the photo is a “fake” spread during the 2008 campaign: As Think Progress noted, during the 2006 elections, the Ohio Republican Party included the following doctored “2004 AP photo” of Al Franken - now a Senator from Minnesota -- in a press release attacking then-Senate candidate Sherrod Brown (D) and Franken, who was campaigning for Brown at the time: Partisan attacks can be disguised as questions

Under the headline "Is Harry Reid Losing It?" Fox Nation linked to a March 5 Hot Air blog post that grossly distorted video of Sen. Harry Reid saying it is “good” news that the economy lost only 36,000 jobs in February -- an assessment many economists agree with. The video cut out Reid's accurate explanation that the “good” news was that unemployment and job losses were lower than economists had expected: Linking to a video of radio host Mark Levin calling for the expulsion of Rep. Louise Slaughter because of her exploration of the possibility of using the self-executing rule to pass health care reform, Fox Nation asked, “Should Rep. Slaughter Be Expelled From Congress?” : Media Matters has documented numerous examples of Fox News' pattern of exploiting any opportunity to show scantily clad women, regardless of the seriousness of the issue being covered. True to form, the following two images appeared on Fox Nation's home page: A Democratic loss is a “Fox Nation Victory”

Fox Nation linked to Kevin McCullough's December 13 Townhall.com column with the headline, “Why Obama Is Worse Than Tiger?” :