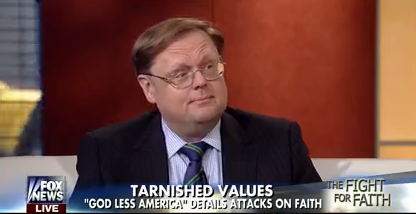 Todd Starnes, Fox News' resident culture warrior, wants to reclaim God from an America of gay pride paraders, hipsters, twerkers, and vegetarians. That, at least, is what he sets out to do in his latest tome, God Less America: Real Stories from the Front Lines of the Attack on Traditional Values.

It's a book that's been generously promoted on the Fox News commentator's network. Starnes' publicity tour has taken him to such programs as Fox & Friends, Hannity, The Kelly File, Fox Business' Lou Dobbs Tonight, and the radio show of Fox contributor Laura Ingraham.

During his publicity tour for God Less America, Starnes has homed in on a consistent message: religious, specifically Christian, values are under attack, largely thanks to an all-out assault allegedly led by the Obama administration, aided and abetted by LGBT activists and advocates for secularists and adherents to minority faiths. Obama, Starnes asserts, is at the forefront of a conspiracy “to eradicate the Christian faith” from the public square.

But Starnes' book isn't really about the state of Christianity in the age of Obama. It's primarily about Starnes himself, and the cultural resentments that define his worldview. Portraying himself as a down-home Southerner who loves sweet tea (a fact he reminds readers of no fewer than nine times), Duck Dynasty, guns, and his hardline Southern Baptist faith, beneath Starnes' folksy veneer is a far more venomous culture warrior.

What Starnes repeatedly - if unwittingly - reveals is that he isn't so much afraid of the impending loss of religious liberty as he is fearful that his exclusionary vision of America no longer holds the sway it once did.

What particularly rouses Starnes' ire about the state of contemporary America is that it's led by, as he pointedly notes, “Barack Hussein Obama.” Starnes laments throughout the book that Obama's America is no longer the one in which in grew up - a country he depicts as more wholesome and unapologetically Christian, when women knew their place and gay people weren't being as obnoxious with all that equal rights stuff:

I grew up in a much simpler time - when blackberry was a pie and dirty dancing meant somebody forgot to clean out the barn for the square dance. It was a time when father still knew best - when the girls were girls and the men were men. I grew up in a time when a rainbow was a sign of God's promise, not gay rights.

To Starnes, Obama perfectly symbolizes the fading of that America. For one thing, Starnes not-so-subtly hints that the president has an affinity for Islam - referring to Obama as someone who “professes” to be a Christian, twice assailing him for calling the Muslim call to prayer “one of the prettiest sounds on earth at sunset,” and suggesting that Obama hasn't secured the release on American pastor detained in Iran because the pastor had left the Islamic faith.

Starnes also lambastes the president for stating that we're “not just a Christian nation,” but also a nation of Jews, Muslims, Buddhists, Hindus, and secularists. A less paranoid observer might view Obama's remark as an affirmation of the country's religious diversity, but Starnes can't help seeing anti-Christian bias. (Starnes writes that it's “puzzling” that any “follower of Christ” would make such a statement.") Likewise, restrictions on proselytization in the military aren't, say, a sensible response to the harassment of non-Christian believers, but part of a “Christian cleansing” executed by the Obama administration. And just as he did in an appearance on Fox's Hannity to promote the book, Starnes compares officials enforcing the First Amendment's establishment clause to Adolf Hitler. “Hitler was not a big fan of the Baby Jesus,” Starnes writes in a chapter titled “Nazis, Communists, and the USA.” “Neither were the Communists. And apparently some American employees and schoolteachers share an equal disdain for the little Lord Jesus.” Starnes is just saying.

But the bulk of God Less America is devoted to propping up the defining feature of Starnes' worldview - his acute persecution complex when it comes to LGBT equality. The longest chapter in the book is bluntly titled “Gay Rights vs. Religious Rights,” but several others focus on LGBT topics like Chick-fil-A, Duck Dynasty, and the Kinky Boots performance at the Macy's Thanksgiving Day Parade. All are meant to reinforce the right-wing myth that any progress towards LGBT equality must come at the expense of liberty for Christians. We're not far from a day, Starnes predicts, when pastors will be “brought up on charges of hate speech against homosexuals.”

Starnes has made his name on Fox News as the network's mouthpiece for the country's most extreme anti-LGBT organizations, including hate groups like the American Family Association (AFA) and the Family Research Council (FRC). His close relationship with those groups is evident in his writing: he cites FRC ten times in the book. The FRC even hosted a launch party for the book at its offices, featuring Starnes and Fox correspondent Shannon Bream: 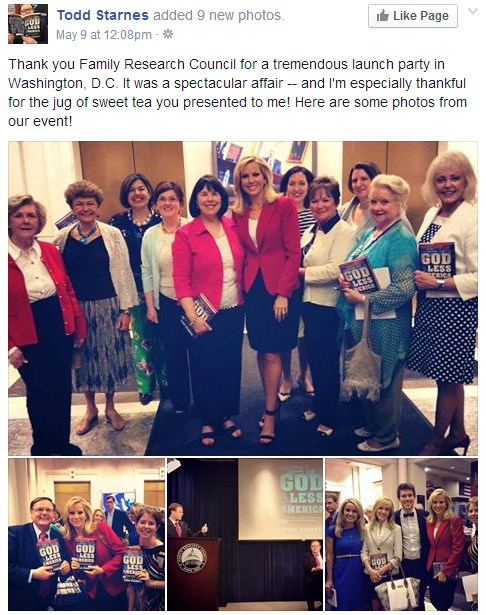 Starnes also cites the Alliance Defending Freedom (ADF), a group working internationally to criminalize homosexuality, another ten times. These groups are relied on to offer commentary on a number of overblown or outright fabricated horror stories Starnes offers about the movement for LGBT equality.

When he's not using scare tactics to warn about basic protections for the LGBT community, Starnes' discussions of LGBT people are marked by stereotypes as stale as the Southern country boy trope with which he hits readers over the head.  Gay men are Dolce & Gabanna-obsessed, body hair-grooming, sissies who can't appreciate manly men's men like Duck Dynasty's Phil Robertson, who notoriously compared homosexuality with bestiality and equated gay people with “drunks” and “terrorists.” According to Starnes, GQ,  the magazine in which Robertson made his infamous remarks, is the kind of publication typically read by “men who prefer body waxing and manicures,” not the Robertsons' down-home homophobia.

Like Phil, Starnes thinks that the gays could be putting us on a slippery slope to bestiality, writing an entire chapter that envisions a Supreme Court ruling legalizing bestiality by 2025.

Starnes' transphobia is just as rabid as his homophobia. When discussing transgender people, he misgenders them and suggests - despite all evidence - that transgender people pose public safety dangers if they're allowed to restrooms that match their gender identities. Such ugly, bigoted remarks make clear that when Starnes complains about how this is no longer the America he grew up in, what he's really upset about is that it's an America where long-oppressed groups are beginning to assert their basic rights.

In his conclusion, Starnes gloomily predicts that "[t]hey" could soon “throw us in jail.” On what grounds? And who are they? It isn't quite clear. Starnes' mission is to awaken readers to the danger President Obama and the liberal elite pose to their cherished religious freedoms. All he has to offer, however, are apoplectic condemnations of LGBT equality, religious diversity, and Brooklynites who wear skinny jeans and eat tempeh and take their tea unsweetened. Yet Starnes and his ideological brethren have continued to thrive in Obama's America - not despite, but because of, a president and a set of ideas they hysterically denounce as grave threats to the American way of life.

Instead of demonstrating how an America that embraces more of its citizens threatens conservatives' liberties, all Starnes has done instead is illuminate the baseless fear and paranoia that motivate the right wing's professional culture warriors.