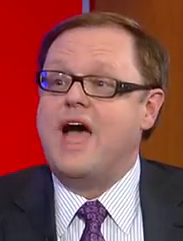 Fox News Radio's Todd Starnes repeated the discredited myth that the post-Don't Ask Don't Tell (DADT) military is persecuting Christians, citing the case of an anti-gay airman who castigated his Air Force superiors to the media as evidence.

In a September 6 column for FoxNews.com, Starnes reported that Sgt. Phillip Monk “is now facing a formal investigation” after inaccurately telling Starnes last month that he was relieved of his duties because he told his openly lesbian commander that he opposed same-sex marriage.

Officials at Lackland Air Force Base in San Antonio said that Monk and his commander had simply “agreed to disagree,” adding “the wing commander said there was no punishment” for Monk's comments. Base officials stated that Monk was relieved of his duties because he was at the end of his assignment - not because of his views on LGBT issues. That didn't stop Monk from blasting the Air Force in his August interview with Starnes:

“I was relieved of my position because I don't agree with my commander's position on gay marriage,” Senior Master Sgt. Phillip Monk told Fox News. “We've been told that if you publicly say that homosexuality is wrong, you are in violation of Air Force policy.”

“I was essentially fired for not validating my commander's position on having an opinion about homosexual marriage,” he said.

Monk said he is brokenhearted over the way the military has treated him.

“The narrative is that you cannot say anything that contradicts Air Force policy.”

He said in essence, Christians are trading places with homosexuals.

Starnes repeated the same language almost verbatim in his latest report, adding that the open service by gays and lesbians has made the armed forces “a social-engineering petri dish”:

Monk tells me Christians are trading places with homosexuals.

“Christians have to go into the closet,” he said. “We are being robbed of our dignity and respect. We can't be who we are.”

I asked Sgt. Monk why he just couldn't keep quiet knowing that the Obama administration has staffed the Pentagon with anti-Christian civilians. Why risk getting booted out of the military?

Sgt. Monk told me he decided to take a stand for his three teenage sons.

“The Monk family will be strong in mind, strong in soul, they will have strong character and strong work ethic,” he said. “That is the ethos of our family. That's what I hope they see in me.”
He hopes his boys will see “a man who stands upright and stands for integrity.”

Sadly, those values are no longer seen as virtuous in a military that's been turned into a social-engineering petri dish.

Try as Starnes might to depict the investigation of Monk as an all-out assault on conservative Christians in the military, it's clear that Monk's harsh words for his Air Force superiors may well have breached military regulations on soldiers' conduct. Article 134 of the Uniform Code of Military Justice prohibits soldiers from engaging in speech or actions “of a nature to bring discredit upon the armed forces.” Going to the media with unfounded allegations that the Air Force is retaliating against Christians would likely merit an investigation under Article 134.

But Starnes asserted that Monk's case indicates widespread punishment of Christians in the military. Alas, this claim is based on nothing more than hearsay. An attorney for the Liberty Institute - which has a history of pushing trumped-up, unfounded “religious liberty” cases - told Starnes that “there must be some sort of systemic problem in the Air Force,” while a local pastor told Starnes that he “hear[s] it every Sunday at church” that life at Lackland is becoming “difficult” for Christians.

This isn't the first time Starnes has falsely claimed Christians are being court-martialed because of their religious beliefs. And while he has repeatedly cried “reverse discrimination” of Christians, Starnes has no problem defending discrimination against LGBT people.