Fox News reporter and serial misinformer Todd Starnes failed to disclose that the source for his latest bogus religious liberty horror story is the vice president of sales at the publishing house promoting Starnes' latest book - a book that, conveniently enough, warns of growing “intolerance” against American Christians.

On March 29, Starnes reported that five-year-old Gabriella Perez had been rebuked by a teacher for trying to pray in her Oviedo, FL school lunchroom. The girl recounted the alleged episode in a YouTube video posted by her father, Marcos Perez. Starnes' report featured an original interview with Perez, who told Starnes that he had long had concerns about “issues and agendas we see in the culture war.”

But on April 1, the Orlando Sentinel raised doubts about the credibility of Perez's story. According to the Sentinel's report, none of the staff who could have been at the cafeteria at the time of the incident recall witnessing the student being spoken to about prayer. The staff member who allegedly spoke to Gabriella Perez hasn't been identified, and the school has reiterated that it has no policy prohibiting students from praying.

The Sentinel also revealed that Marcos Perez is the vice president of sales at Charisma House, the publisher of Starnes' soon-to-be-published collection of religious liberty horror stories, God Less America: Real Stories from the Front Lines of the Attack on Traditional Values (emphasis added):

School officials have not interviewed Gabriella, who was pulled from the school by her parents the day after the video was posted. The Perezes said they accelerated existing plans to home school her. Her father is vice president of sales at Charisma House, a Lake Mary-based Christian book publisher. The company is currently promoting the book “God Less America: Real Stories from the Front Lines of the Attack on Traditional Values,” by Fox News host Todd Starnes. Starnes reported on the lunch prayer controversy for Fox News Radio. Marcos Perez said he did the interview with Starnes because “I'm passionate about the cause.” He seemed distressed by any notion of ulterior motives. Using his family to promote a book “would be egregious,” he said. “I'm a father first, a VP of sales second.”

Starnes' report on the alleged incident now includes an editor's note disclosing Perez's employment at the top of the article: 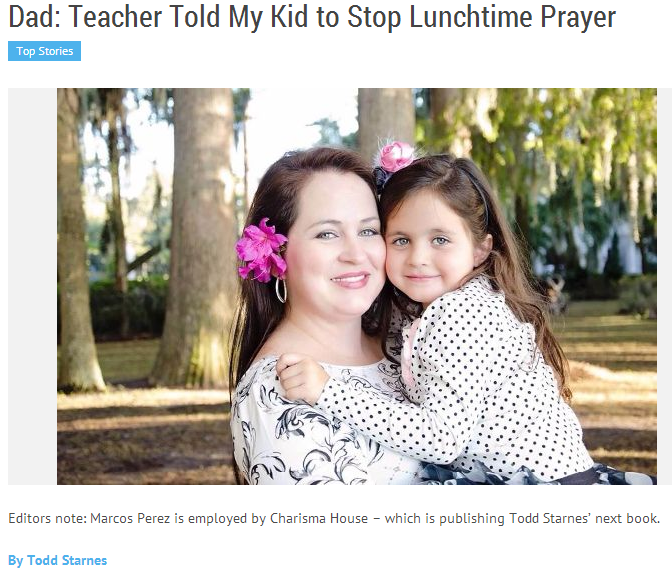 A cached version of the article, however, shows that Starnes failed to disclose the tie when he originally published the story: 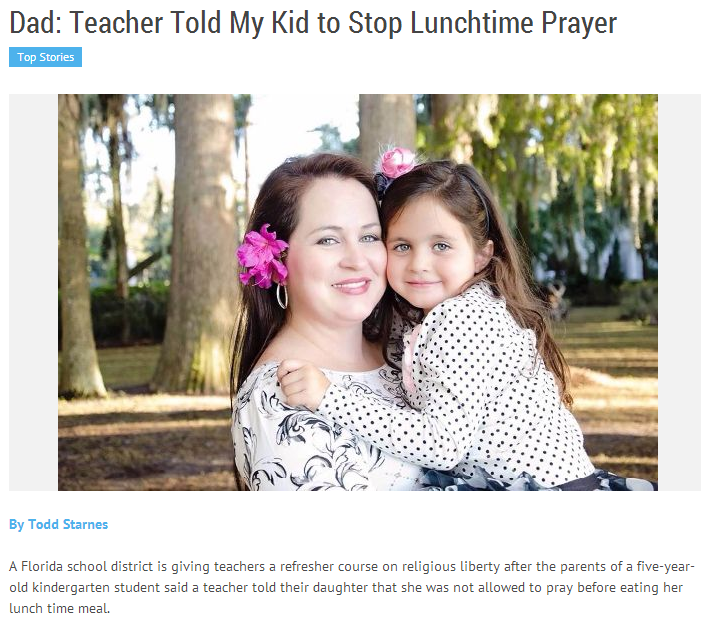 Starnes has a long history of promoting bogus culture war stories. A shameless mouthpiece for right-wing hate groups, he's repeatedly shown a willingness to tout the fake controversies on which those groups thrive.

To Starnes, the military's anti-proselytization policy - which applies to all religious groups - is a "significant attack" on Christianity by the Obama administration. When the Southern Baptist Convention's website was blocked on Pentagon computers due to potentially harmful malware, Starnes proclaimed that the episode demonstrated "religious hostility within the Pentagon." After an airman who had clashed with his superiors was relieved of his duties at the end of the assignment, Starnes dutifully reported the man's claim that he was punished for opposing marriage equality - declaring, for good measures, that “Christians are trading places with homosexuals” in the military. The airman's baseless claims triggered an investigation for providing false statements.

Similarly, Starnes reported that a track student punished for disrespectful behavior toward a meet official had actually been disqualified for "thanking the Lord for winning the race." Meanwhile, a New York school district had to ask Starnes to correct his false report than an anti-bullying presentation had included "a lesbian kiss." His culture war fear mongering has gotten him condemned even by Christian writers.

Starnes' failure to disclose his ties to the source of his latest dispatch from the culture war is of a piece with his larger pattern of shoddy journalism. If there's any virtue in Starnes' “reporting,” it's that it so often reveals the utter baselessness of the right wing's religious liberty horror stories.