Fox News has featured seven appearances by opponents of a proposed United Nations Arms Trade Treaty since a conference discussing it began on July 2, and none by the treaty's supporters. Treaty backers say it is essential for curtailing the illegal arms trade that keeps guns flowing to human rights abusers.

Network Has Hosted Seven Appearances By Opponents Of Treaty, None By Supporters Since Treaty Conference Began. Fox News has featured six segments on the Arms Trade Treaty since the UN conference to debate it began on July 2, according to a Media Matters review. Those segments have included six different opponents of the treaty and no supporters. 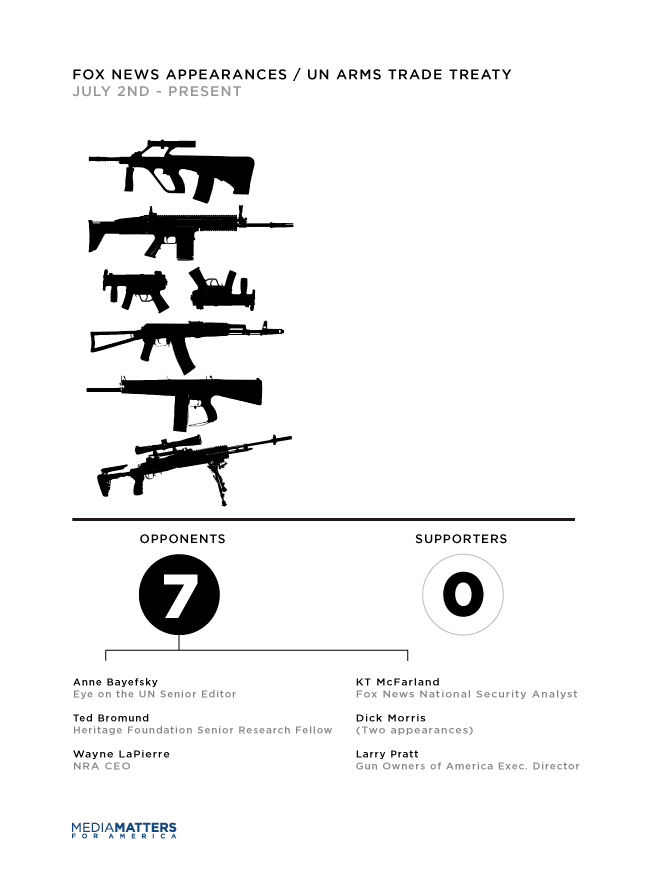 Without A Treaty, Arms Flow From Non-U.S. Markets To Human Rights Abusers

U.N.: Illicit Trade In Small Arms “Wreaks Havoc Everywhere.” The UN has stated that "[t]he illicit trade in small arms, light weapons and ammunition wreaks havoc everywhere" because "[m]ore human rights abuses are committed with small arms than with any other weapon." From the United Nations Office for Disarmament Affairs:

The majority of conflict deaths are caused by the use of small arms, and civilian populations bear the brunt of armed conflict more than ever. Also, small arms are the dominant tools of criminal violence. The rate of firearms-related homicides in post-conflict societies often outnumbers battlefield deaths. These weapons are also linked to the increasing number of killings of UN employees and peacekeepers, as well as workers from humanitarian and non-governmental organizations.

Small arms facilitate a vast spectrum of human rights violations, including killing, maiming, rape and other forms of sexual violence, enforced disappearance, torture, and forced recruitment of children by armed groups. More human rights abuses are committed with small arms than with any other weapon.

Furthermore, where the use of armed violence becomes a means for resolving grievances and conflicts, legal and peaceful dispute resolution suffers and the rule of law cannot be upheld. [UN.org, Small Arms, accessed 10/19/11]

Recognizing that the absence of commonly agreed international standards for the transfer of conventional arms that address, inter alia, the problems relating to the unregulated trade of conventional arms and their diversion to the illicit market is a contributory factor to armed conflict, the displacement of people, organized crime and terrorism, thereby undermining peace, reconciliation, safety, security, stability and sustainable social and economic development,

Decides, therefore, to convene a United Nations Conference on the Arms Trade Treaty to meet for four consecutive weeks in 2012 to elaborate a legally binding instrument on the highest possible common international standards for the transfer of conventional arms [Resolution adopted by the General Assembly 64/48, 12/2/09]

Treaty Negotiators Have Publicly Stated That They Will Not Seek To Regulate Domestic Firearms Policy...

State Department: The United States Will Not Agree To A Treaty That Restricts “Civilian Possession Or Trade Of Firearms Otherwise Permitted By Law Or Protected By The U.S. Constitution.” From the website of the Department of State listing a series of “redlines” that must not be crossed for the United States to support the final version of a small arms treaty:

The Second Amendment to the Constitution must be upheld.

U.N. General Assembly Resolution: Under Treaty States Will Retain Right “To Regulate Internal Transfers Of Arms And National Ownership.” From a United Nationals General Assembly resolution issued on January 12, 2010 that set the agenda for what the treaty would seek to accomplish:

Acknowledging the right of all States to manufacture, import, export, transfer and retain conventional arms for self-defence and security needs and in order to participate in peace support operations,

Acknowledging also the right of States to regulate internal transfers of arms and national ownership, including through national constitutional protections on private ownership, exclusively within their territory, ... [The United Nations, 1/12/10]

According To Oxfam, A Humanitarian Organization Supporting The Treaty Negotiations, “No Government Is Discussing A Treaty That Would Ever Impact The Right To Bear Arms.” From an October 16, 2009 article in The Washington Post:

“No government is discussing a treaty that would ever impact the right to bear arms, nor require regulation of domestic sales of arms,” said Scott Stedjan, a senior policy adviser at the relief group Oxfam America. “This is totally about international transfer of arms so that they don't go to human rights abusers.” [The Washington Post, 10/16/09]

Top U.N. Arms Official Roberto García Moritán: The Goal Of The Treaty Is To Create “Common Standards” When Countries “Export Or Import Weapons.” From a July 9, 2010 United Nations News Centre press release quoting Chair of the Preparatory Committee for the UN Conference on the Arms Trade Treaty Moritán describing “the ultimate goal” of the small arms treaty:

Currently, 80 per cent of the global trade in conventional weapons is dominated by a handful of countries, but with globalization, new producers are entering the market, with over 100 nations producing some type of weapons.

“So the ATT is an effort to try to put a little bit of predictability into a very complex and sensitive issue,” Mr. García Moritán said at a press conference in New York.

The ultimate goal, he added, “is to try to have common standards to be applied by all countries when they export or import weapons.”

[Moritán] acknowledged that “the ATT will not solve all problems,” but he expressed hope that the pact will pave the way for a “common responsible attitude from all States that produce or buy or import weapons.” [UN News Centre, 7/9/10]

Clinton: United States' Treaty Prerogative Is To Implement Arms Trade Rules Already Used By The U.S. On A Worldwide Scale. From an October 14, 2009 press release issued by Secretary of State Hillary Clinton:

On a national basis, the United States has in place an extensive and rigorous system of controls that most agree is the “gold standard” of export controls for arms transfers. On a bilateral basis, the United States regularly engages other states to raise their standards and to prohibit the transfer or transshipment of capabilities to rogue states, terrorist groups, and groups seeking to unsettle regions. Multilaterally, we have consistently supported high international standards, and the Arms Trade Treaty initiative presents us with the opportunity to promote the same high standards for the entire international community that the United States and other responsible arms exporters already have in place to ensure that weaponry is transferred for legitimate purposes. [U.S. Department of State, 10/14/09]

... But Fox's Treaty Opponents Push Baseless Claim That Second Amendment Is At Risk

Fox's Morris On Hannity: Obama Is Pushing “Gun Control” Through Treaty. On the July 2 edition of Hannity, Fox News analyst Dick Morris said that Obama hasn't “moved for gun control lately” because “he's doing it by treaty” instead. From the segment:

MORRIS: The other thing I also talk about in “Screwed,” and I just want to alert people to, is on July 27th, the arms trafficking treaty is going to be signed in New York City.

MORRIS: Because he's doing it by treaty.

CARLSON: Because he doesn't need to. And it's a stealth way to do it, and nobody's watching it. Dick Morris.

MORRIS: Read about it. It's important that we get up on, because we'll going to have to fight against ratification of this treaty this year. [Fox News, Hannity, 7/2/12]

PRATT: Well, it would completely work against what the Second Amendment is intended to do but it doesn't seem that the Constitution is much of a obstacle or a problem for this administration. But nevertheless “shall not be infringed” is something that a treaty can't trump. The very language in the Constitution dealing with treaty-making says that the treaties have to be made under the authority of the United States. And if we the people haven't given authority for gun control to the United States, to the federal government, then its hands are tied and at a practical level I think even Harry Reid's Senate would look at that treaty if presented to them to say “this is toxic, I'm not going there in an election year.” [Fox News, America Live, 7/3/12]

Morris On Fox & Friends: “Stop That Treaty” To “Keep Our Second Amendment Rights Intact.” On the July 5 edition of Fox & Friends, Morris said that the treaty “will basically be back door gun control in the United States” and that “we have got to mobilize to stop that treaty so we can keep our Second Amendment rights intact.” From the segment:

MORRIS: You know, there is something that's preceding under the radar that before we have to go I want to mention. This week they started negotiations in New York on an international gun control treaty. We talk about this in Screwed -- my book. And on July 27, they are going to sign the diplomats of 190 countries, an arms trade treaty, ATT, which will basically be back door gun control in the United States. It will take the gun control issue away from the congress and give it to the United Nations as part of an international treaty. And that treaty is going to come up for ratification during the lame duck session of Congress. And we have got to mobilize to stop that treaty so we can keep our Second Amendment rights intact.

LAPIERRE: The UN gun control plan is the most extreme imaginable. It says to people in the United States turn over your personal protection and your firearms to the government, and the government will protect you.

MEGYN KELLY (ANCHOR): It does? Because the President, the administration has said we support this but it doesn't infringe on our Second Amendment rights here. As a practical matter you tell us, to gun owners watching this program right now, what would it mean for them?

LAPIERRE: Right now it would affect every handgun, rifle and shotgun American citizens own.

LAPIERRE: It's the most extreme imaginable-- It sets up global agencies, data centers, tracking, monitoring, surveillance, supervision, it institutionalizes the whole UN gun plan within the bureaucracy of the United Nations with a permanent funding mechanism. And included in this gun plan is implementation legislation that they are going to press for the United States to adopt. [Fox News, America Live, 7/5/12]

BRIAN KILMEADE (HOST): Do you believe that somehow that will affect us here domestically with our Second Amendment?

BROMUND: It's conceivable. The way it could work is that a lot of judges now are starting to look at international norms, international standards in order to reinterpret our laws and Constitution. Over time, treaties like this could encourage these judges to start restricting Second Amendment rights. [Fox News, Fox & Friends, 7/6/12]

DAVE BRIGGS (HOST): So again it could perhaps adversely affect the United States. Has the U.N. outlived its purpose, the one Alli was describing earlier?

BAYEFSKY: You are asking -- the point is that this international treaty is going to impinge on the rights of Americans. And I think we have to understand that the international theory has to be matched up with enforcement, which is supposed to take place at the domestic level which means we have to worry about the Second Amendment and the impact on Americans' lives.

Media Matters reviewed the TVEyes.com database for all mentions of “United Nations” or “treaty” between July 2 and July 9. The following results were compiled: