Jeremy Carl, a research fellow at the Hoover Institution at Stanford University, wrote a May 23 FoxNews.com op-ed complaining about a Starbucks policy allowing “anyone to spend time in its stores and use restrooms regardless of whether they make a purchase.” He also criticized the company for having engaged "Eric Holder as an adviser on diversity issues,” claiming he “has a long history of making accusations of racial discrimination, often unjustified.”

As one piece of evidence against Holder, Carl linked to a January 2015 opinion piece by Jared Taylor on the white supremacist website American Renaissance. Media Matters found the May op-ed while examining media outlets that have uncritically promoted or cited research by white supremacist media.

The Southern Poverty Law Center wrote that American Renaissance “has been one of the vilest white nationalist publications, often promoting eugenics and blatant anti-black and anti-Latino racists. In 2005 for example, after Hurricane Katrina hit New Orleans, Taylor wrote, ‘When blacks are left entirely to their own devices, Western Civilization—any kind of civilization—disappears.’” The Anti-Defamation League wrote that Taylor “upholds racial homogeneity as the key to fostering peaceful coexistence.”

Taylor’s piece was a review of conservative commentators John Fund and Hans von Spakovsky’s book Obama’s Enforcer: Eric Holder’s Justice Department. The review began by attacking Holder as “a devious, power-hungry, racial zealot” who is “probably the most racially committed black ever to hold a cabinet job” and concluded that while the Republican and Democratic parties are similar, Republicans “are less likely to subject whites to outright racial plunder.” 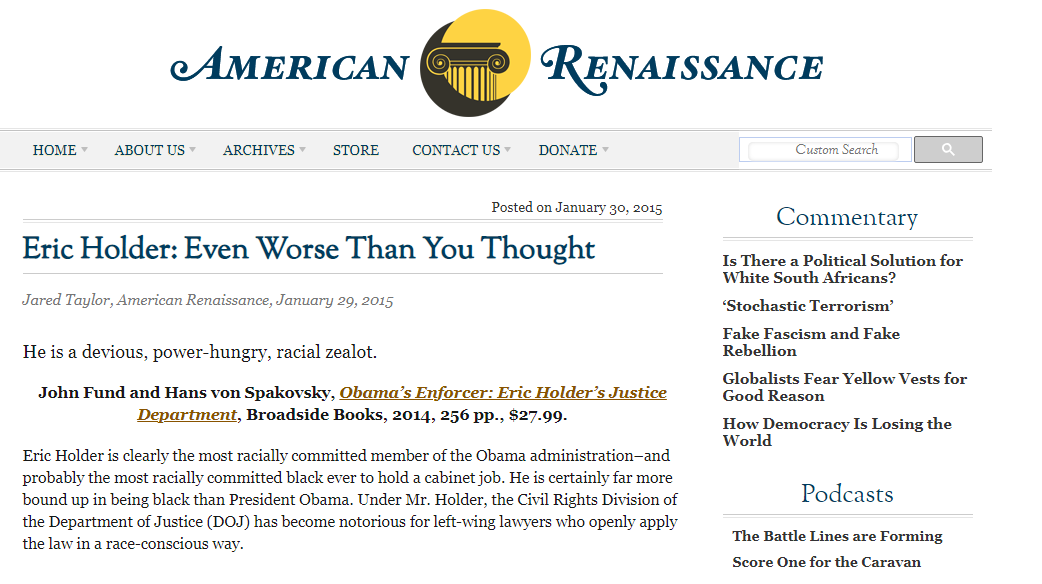 Media Matters contacted Fox News about the op-ed and asked if the network thought the research citation was appropriate. The company did not reply but changed the link so it now directs to the Amazon page for Obama’s Enforcer. The site has not noted the change or posted an editor’s note (the op-ed’s timestamp reflects the update).

Media Matters later contacted Carl, who stated: “Obviously I would not have intentionally cited American Renaissance in any article I wrote — I wrote this article on a very fast same-day deadline at Fox News’ request and simply missed the sourcing. I suspect I missed it because the article was discussing work by Hans Von Spakovsky from Heritage, whom I do know and whose work I trust. I likely simply erred in assuming it was by Von Spakovsky.”

Carl, who agreed with Fox's decision to change the citation, also claimed “Holder has a history of numerous racist statements and actions is beyond doubt. I don’t apologize for saying that — then or now. One doesn’t need to link to American Renaissance to make that point, and obviously I would not have intentionally done so.” He additionally suggested that because Media Matters chose to contact Fox directly first rather than the author, it was evidence we are engaging in the “harassment of a critic of leftism" instead of a "pursuit of truth.”