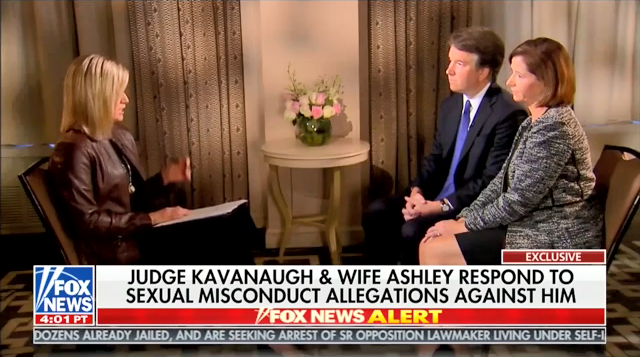 Supreme Court nominee Brett Kavanaugh sat down for an interview with Fox News’ Martha MacCallum on Monday. Multiple women have come forward in recent days to report that Kavanaugh sexually assaulted them: Christine Blasey Ford has said Kavanaugh assaulted her at a party in high school; and Deborah Ramirez has said he exposed himself to her in college.

Though MacCallum quickly received praise from right-wing media for the interview, she failed to highlight a number of crucial elements and did a poor job of following up on others.

Here are seven ways the interview was a sham:

Ford reported that Kavanaugh’s high school friend Mark Judge was present in the room when Kavanaugh assaulted her. Judge clearly knew Kavanaugh and  wrote about attending his 2005 wedding. He is a conservative writer and recovering alcoholic who has extensively written about his misogyny and drunken escapades in high school. In one story, Judge even wrote about being a peeping Tom when he was younger. Judge’s ex-girlfriend told The New Yorker that he told her a disturbing story about him and his friends taking turns having sex with a drunk woman.

And yet, MacCallum made just passing references about Judge during the interview and Kavanaugh didn’t acknowledge him at all. Republicans on the Senate Judiciary Committee are also resisting calling Judge to testify. Kavanaugh claimed over a dozen times to MacCallum that he wanted a “fair process.” It’s unclear why that process would exclude a key witness.

Conservative power player and writer Ed Whelan spun a conspiracy theory on Twitter that a doppelganger was the one responsible for the sexual assault of Christine Blasey Ford. The ridiculous theory backfired when it was met with widespread ridicule and Ford herself debunked it.

After teasing Whelan’s revelation for days, conservative figures quickly denied that Kavanaugh had any prior knowledge of it. Whelan also denied any coordination with Kavanaugh or the White House.

Whelan’s claim was undermined when Ford shared an email with The Washington Post that showed Whelan reviewed her LinkedIn page before Ford’s name was even public. Ford sent that email to the Post 90 minutes after the paper had asked the White House for comment.

Sen. Orrin Hatch’s office denied being involved in any coordination with Whelan, even though a staffer appeared to have prior knowledge of what Whelan was about to do.

There are a lot of questions about how something so unethical could have happened and who knew about it. While MacCallum did not ask about Whelan, Kavanaugh did imply that he thought it was possible that Ford could still be confused as to the identity of her attacker.

Kavanaugh has repeatedly told stories about excessive drinking in college. In his Fox News interview, Kavanaugh implausibly suggested he wasn’t a heavy drinker and claimed that he never drank to the point of blacking out. Materials submitted to the Senate Judiciary Committee as part of his nomination contain text of several speeches in which Kavanaugh told stories about parties involving heavy drinking and drunken shenanigans. For instance, in a 2014 speech at a Yale Federalist Society banquet, Kavanaugh said: 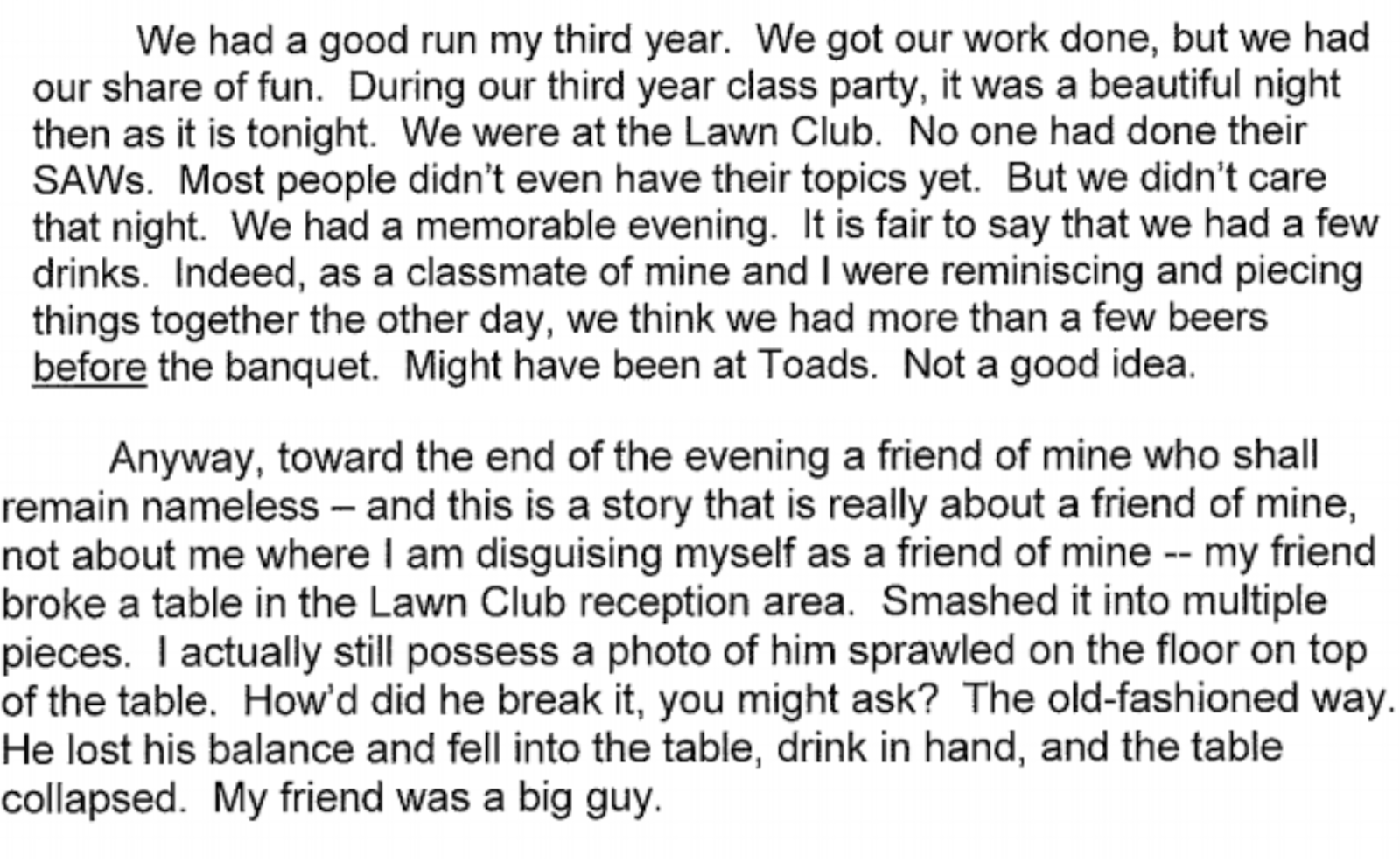 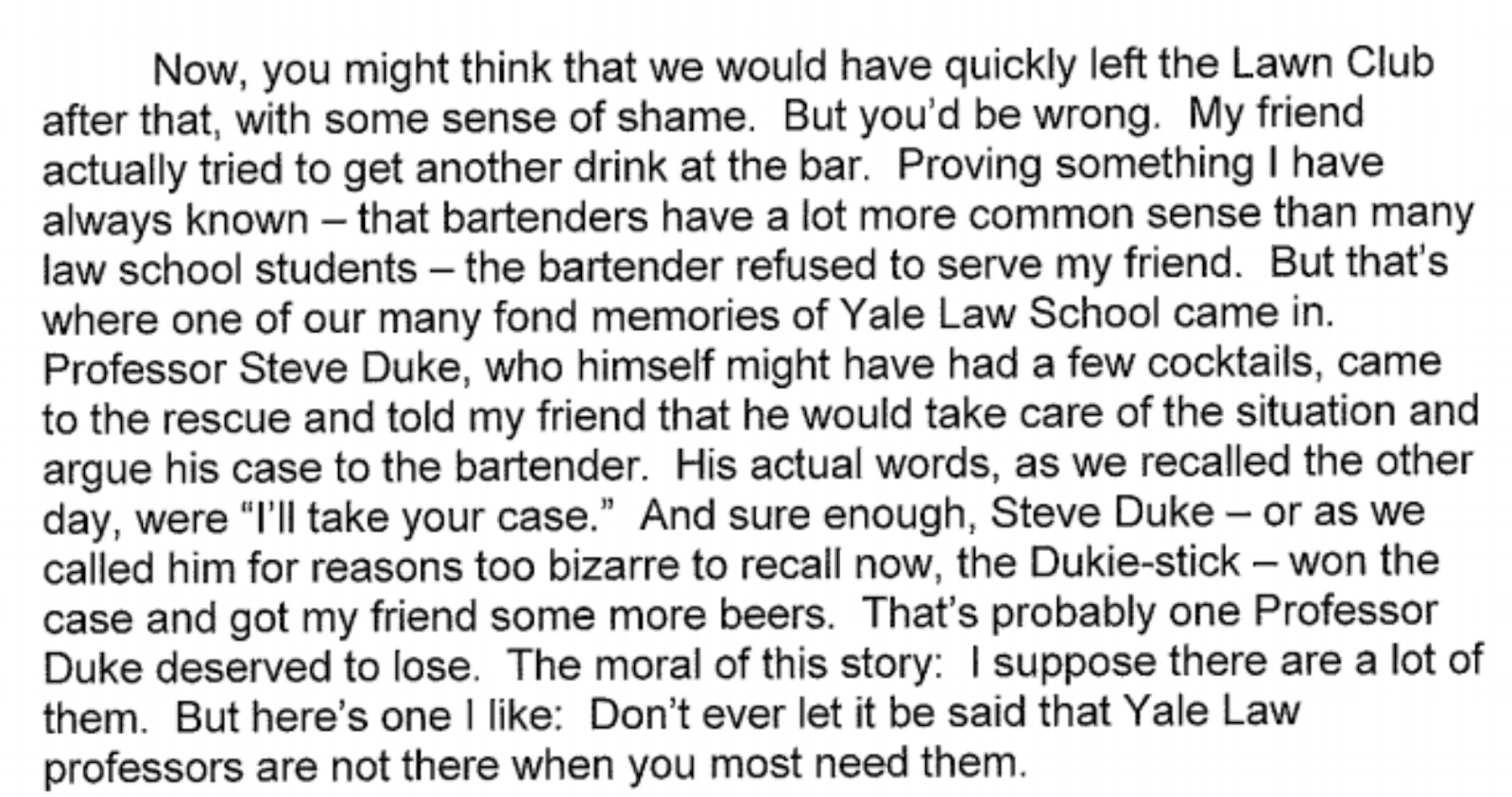 In the same speech, Kavanaugh bragged about arranging a party bus to go to a Boston Red Sox game: 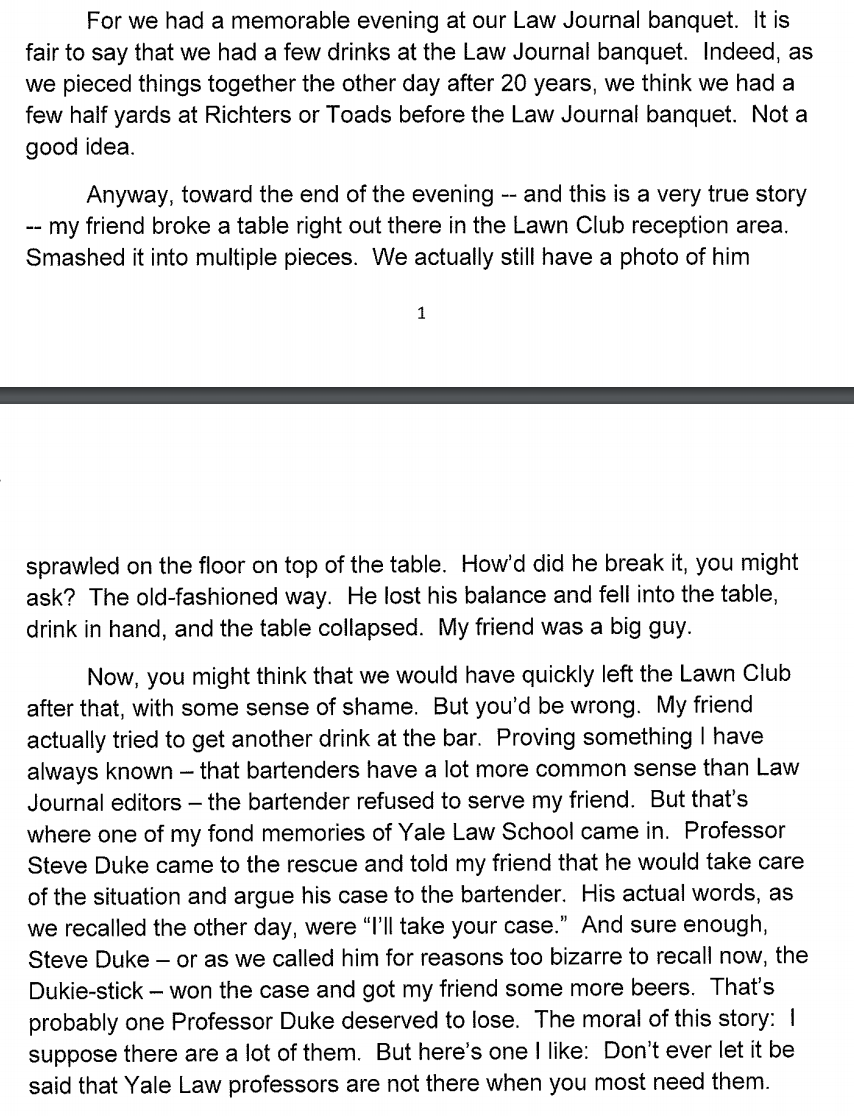 Kavanaugh also listed himself as the treasurer of the “100 Kegs or Bust” club in his high school yearbook, and multiple former classmates described the culture of the school to be one of frequent parties with excessive drinking. His former Yale roommate has stated of Kavanaugh: “He was a notably heavy drinker, even by the standards of the time, and that he became aggressive and belligerent when he was very drunk. ... I do remember Brett frequently drinking excessively and becoming incoherently drunk.”

The Yale Daily News also reported that: “In addition to DKE, Kavanaugh also belonged to Truth and Courage, one of Yale’s secret societies for seniors. Among some students, the all-male club, which was popular with athletes, was known by the nickname ‘Tit and Clit.’” Buzzfeed reported that according to alumni, the society was known for being “mostly about drinking.”

Reports that Kavanaugh likes a “certain look” in his women law clerks.

During the interview, Kavanaugh bragged about his record of hiring women law clerks. But MacCallum never mentioned recent reporting from The Guardian that a “top professor at Yale Law School who strongly endorsed supreme court nominee Brett Kavanaugh as a ‘mentor to women’ privately told a group of law students last year that it was ‘not an accident’ that Kavanaugh’s female law clerks all ‘looked like models’ and would provide advice to students about their physical appearance if they wanted to work for him.” Multiple women reported that they were coached on how to dress for an interview with Kavanaugh, including one woman who stated she was told that Kavanaugh hired women “with a certain look.”

Does Kavanaugh actually want an FBI investigation or not?

MacCallum asked Kavanaugh’s wife whether she wanted an FBI investigation into these (and any subsequent) reports. Kavanaugh intervened, giving a non-answer. Instead of pressing for a clear response, MacCallum  instead started a line of questioning about how unfairly Kavanaugh thinks he’s being treated.

MACCALLUM: Do you believe there should be an FBI investigation into these allegations and that a pause should happen and, you know, sort it all out? If there’s nothing to worry about and nothing to hide, why not have that process, Ashley? And then I’ll ask you that, Brett.

KAVANAUGH: I mean, I’ve said all along and Ashley, too, I want to be heard. I was first interviewed last Monday, the day after the allegation appeared by the committee staff under penalty of felony, and I denied this categorically and unequivocally and I said twice during that, I said, “I want a hearing tomorrow,” last Tuesday, a week ago.

I want an opportunity – a fair process. America’s about fairness, I want a fair process where I can defend my integrity and clear my name as quickly as I can in whatever forum the Senate deems appropriate.

MACCALLUM: When you hear senators who are on the committee – Senator Mazie Hirono and then you hear from others, you know, the New York Senator Gillibrand, she says, “I believe this woman. I believe all of them. They’re credible, and we all have to believe them.”

When you hear United States Senators who are making judgments, final judgments, what does that make you think about the presumption of innocence in this country?

KAVANAUGH: In America, we have fairness. We hear from both sides. I’ve spent my life in the judiciary, the – our judicial system, and part of the judicial systems as I’ve said during my first – my hearing was process protectium (ph). That’s what judges believe that’s what our system was built on, the rule of law, about fair process.

MACCALLUM: Do you feel unprotected by the process?

KAVANAUGH: What I’m here to do is tell you the truth, and this allegation from 36 years ago is not –

MACCALLUM: But separately from what you’re being accused of just as a judge, if you were looking at this case as a part of what you’re going through and someone said, “This person did that at 17-years-old,” is it fair to judge them on something that when they’re in their 50s, 60s year old?

KAVANAUGH: I think everyone is judged on their whole life. I’m a good person. I’ve led a good life. I’ve tried to a lot of good for a lot of people. I am not perfect, I know that. None of us is perfect. I’m not perfect, but I’ve never, never done anything like this.

According to the transcript, Kavanaugh mentioned “fair process” 17  times. And yet thanks to Fox News, we still don’t have a clue what he thinks a fair process would look like, given that he seems to have dismissed the fairest procedure available out of hand.

At least he’s not up for a job that oversees the entire United States’ justice system.

The weirdest part of the interview was also a non sequitur.

This however is neither here nor there re the allegation, which is a forcible attempted assault https://t.co/eujQ89MqkP

MacCallum failed to clarify that being a virgin or not has no bearing on whether one attempted sexual assault. Any journalist for a real news network would, at least.

Some have defended the relevance of the answer by noting that this answer was in response to the account raised by attorney Michael Avenatti. But subsequent discussion between Kavanaugh and MacCallum implies that this is relevant to all of these accounts. At the very least, MacCallum had a responsibility to clear things up. That did not happen.

MacCallum alleged that there is no corroboration of Ford’s account. That is simply not true.

MacCallum not only doesn't press Kavanaugh on the Ford allegations but volunteers that the allegation hasn't been corroborated. Which is only true in the context of other attendees.

The Washington Post reviewed notes from Ford’s therapy sessions and spoke with her husband who also noted that Ford had shared her account in couples therapy in 2012. On the advice of her attorney, Ford also took a polygraph test in August; the results showed she was being truthful in relaying her account of the incident.

MacCallum disappeared that evidence, saying, “And to this date, no one has corroborated the story that she has told.”

The interview was a stilted, overproduced sham, and you have Bill Shine to thank.