Fox News completely ignored the growing controversy surrounding an anti-gay South Carolina mayor's firing of his town's lesbian police chief, despite devoting nearly two hours of coverage to the resignation of Mozilla CEO Brendan Eich, who departed in the wake of an outcry over his support for California's 2008 ban on same-sex marriage.

On April 15, newly elected Latta, SC Mayor Earl Bullard fired Police Chief Crystal Moore, a 20-year veteran of the department. Bullard alleged that Moore had failed to maintain order and questioned authority - the first such complaints lodged against Moore in her two decades with the department. Moore and her supporters charged that her firing was a blatant case of anti-gay discrimination, citing Bullard's stridently anti-gay views and a leaked phone conversation in which the mayor said he'd rather entrust his children to an alcoholic than someone whose “lifestyle is questionable.”

On April 22, the town council unanimously voted to prevent Bullard from hiring a replacement over the next two months, with the ultimate aim of reinstating Moore.

But according to an Equality Matters analysis, while Moore's firing received widespread national and even international attention, Fox gave the story no coverage at all: 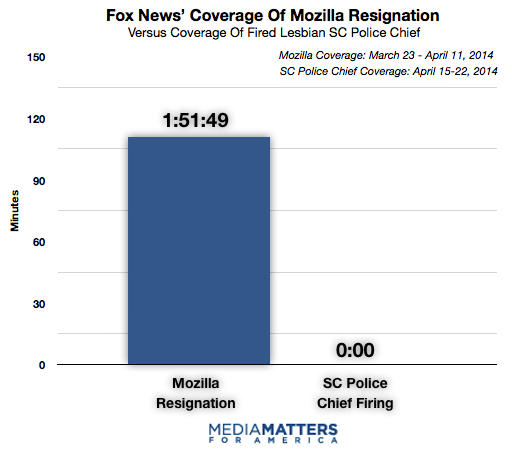 Fox's silence on Moore's firing contrasts sharply with the network's coverage of Eich's resignation as Mozilla's CEO. Following the discovery that Eich had donated $1000 to California's Proposition 8, the Mozilla CEO stepped down amidst criticism from marriage equality supporters and even several Mozilla employees.

Fox News personalities cited the incident as evidence of “liberal intolerance” and an alleged “double standard” on the Left. As Fox's resident media critic Howard Kurtz stated, “If a conservative company would have pushed out a CEO for supporting gay marriage, chances are much of the media would have been in uproar”:

Fox's coverage of the Mozilla controversy was emblematic of the right-wing media's persecution complex. While Fox consistently peddles the narrative that conservative Christians are being targeted for discrimination by progressive bigots, its silence on Moore's firing fits the network's larger pattern of ignoring or even championing anti-LGBT discrimination.

After the U.S. Senate's historic passage of the Employment Non-Discrimination Act (ENDA) last fall, Fox gave the vote a mere 19 seconds of coverage. On those few occasions that Fox does decide to cover the debate over anti-LGBT discrimination, its personalities almost invariably oppose efforts to curb it. Host Bret Barier suggested that being gay is a “belief” that may conflict with a company's goals, while correspondent Shannon Bream and commentator Todd Starnes have defended anti-LGBT discrimination on bogus religious liberty grounds.

Studies show that despite crucial political victories in recent years, anti-LGBT employment discrimination remains a real, persistent problem. In 29 states, it's still perfectly legal to fire an employee for being gay, and there's no federal statute prohibiting discrimination against LGBT workers. Fox might depict religious conservatives as the victims of a totalitarian gay crusade, but unlike sexual orientation or gender identity, religion is a federally protected class.

But with the network crying tyranny over the voluntary departure of a CEO who donated to a rabidly anti-gay campaign and unwilling to even acknowledge the firing of a lesbian city employee, Fox shows no signs that it's interested in a fact-based discussion of discrimination and diversity in modern America.