Fox Nation highlighted a June 30 Washington Times article by claiming that Obama, in his speech, warned Africa to “Be Wary of [the] USA.” Fox Nation included a portion of the Times article, which was titled “Obama to Africa: Be wary of foreign powers, even United States”: 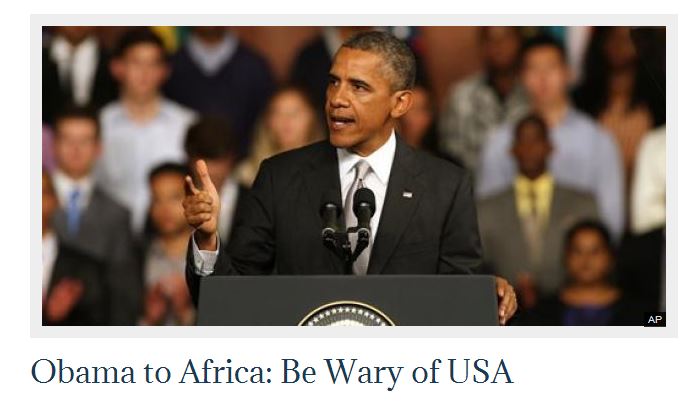 But the Fox Nation headline distorted what Obama was saying. In the speech, Obama emphasized the role that the U.S. would play in the future economic development of African nations, but also explained the importance of due diligence when considering foreign business opportunities, context that was included in the original article, but excluded by Fox Nation:

“When we look at what other countries are doing in Africa, I think our only advice is make sure it's a good deal for Africa,” Mr. Obama told reporters in Johannesburg.

“If somebody says they want to come build something here, are they hiring African workers? If somebody says that they want to help you develop your natural resources, how much of the money is staying in Africa? ... Don't just assume that folks come here and they're automatically benefiting Africans. And that includes the United States. Ask questions in terms of what we do.”