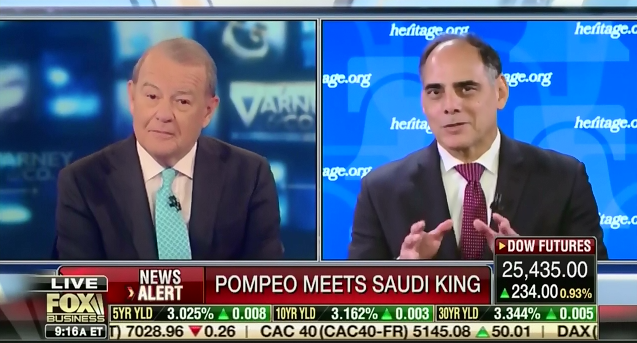 Carafano is currently the vice president of the Heritage Foundation and served as a State Department adviser for President Donald Trump’s transition team. In his role at the Heritage Foundation, he has written obsessively about containing Iran, which he considers vital to American national security interests; endorsed Trump’s association with strongmen; advocated for American mercenaries conducting operations in Afghanistan in place of regular U.S. military personnel; referred to Trump’s absurd and ineffective travel ban as “reasonable”; argued that, without the U.S. assisting Saudi Arabia in the brutal war in Yemen, the “region” may fall apart; and fearmongered about a favorite right-wing claim about “terrorists trying to cross from Mexico to the U.S.”

During the appearance, both host Stuart Varney and Carafano framed the major concern surrounding the alleged attack on Khashoggi as potentially jeopardizing the “containment of Iran,” and Carafano insisted that the United States government not act until officials “get the facts” of the alleged murder “right.” Varney even floated the idea that the United States could simply slow-walk an investigation and any action on the matter “so the days spread to a week or so, which delays any response from us. ... if I say, can we get away with that, that sounds pejorative, but do you think that's what's going to happen?”

According to The Wrap, Fox Business remains “one of only two media organizations” sponsoring a planned Saudi Arabian business conference called the Future Investment Initiative, while the “other sponsor, Al Arabiya, is a Saudi-owned operation.” According to the report, “Over the last week, The New York Times, CNN, CNBC, Bloomberg, Nikkei and the Financial Times all pulled out of the event amid growing questions about the kingdom’s involvement in the” alleged assassination of Khashoggi.

From the October 16 edition of Fox Business’ Varney & Co.:

JAMES CARAFANO (HERITAGE FOUNDATION): So, I'm going to say some words on this show you've never heard before. President Trump is the calm, responsible guy here. From the beginning he said, we've got to get the facts right, and he is exactly right. Look, we're going to have a strategic relationship with Saudi Arabia a year from now. We're going to have a strategic relationship with Turkey a year from now. That's not going to change because the world hasn't changed. But we have to go forward operating on what actually happened, because these relationships are too important to just fly off the handle, and we have to deal with the reality of what happened. So, we have to wait for the facts to come in. So, even though we've heard this CNN report, until the government of Saudi Arabia actually come out and says something, I think we have to be very careful. And the president's right. And you are right. The -- what the greatest destabilizing force in the region that's getting people killed, that's spreading misery by the hundreds of thousands is Iran, and that is the big ticket we have to deal with.

CARAFANO: -- through the legal process that's required to do that. So, this is a U.S. person, so we might have an issue here where we might want to extradite something. We've got joint investigations between the Saudis and the Turks. We have the U.S. offer -- we should have learned something from the Kavanaugh hearing, which is we shouldn't declare guilt and innocence and then just pontificate our politics. We should let the facts decide what the U.S. response is, and it may take time for the real, concrete facts to come out.