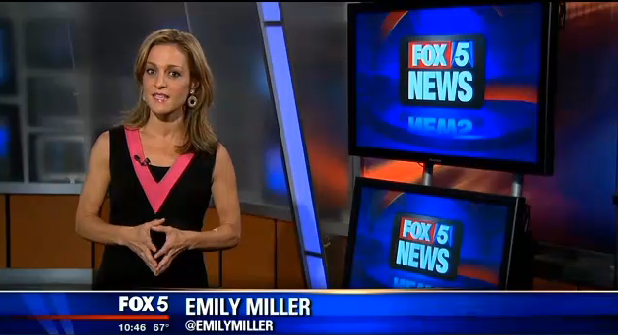 On May 28, Fox 5 aired a segment on the Fairness for All Marylanders Act, which Gov. Martin O'Malley (D-MD) signed into law on May 15. The law, which mirrors measures passed in 16 other states and several Maryland counties, prohibits discrimination based on gender identity in employment, housing, credit, and public accommodations. Opponents havelaunched a petition drive aimed at overturning the law, peddling the myth that sexual predators will exploit the measure to sneak into women's restrooms and assault women and children.

Miller's May 28 report hyped those fears, citing a problematically-worded Rasmussen Reports poll indicating that most people oppose allowing “a man to use a woman's restroom” and suggesting that the law posed a danger to women's safety. The report also falsely claimed that Maryland was only the second state to adopt gender identity protections:

Maryland just became the second state after California to pass a law that prohibits discrimination based on what is called “gender identity.” The law will protect transgender people in the workplace, with housing and public accommodations.

During a debate that followed Miller's report, Miller provided State Delegate Neil Parrott (R) - the leader of the petition drive - a platform to claim that the law would make it easier for predators to commit sex crimes:

In reality, there's no empirical basis for that claim; state and local law enforcement officials, government employees, and victims' advocates across the country testify that gender identity protections haven't led to increases in sexual assault, calling the transgender bathroom myth “beyond specious.”

But Miller didn't push back against such transphobic fear-mongering - likely because she has promoted those same fears herself. In April, when she was a senior editor for The Washington Times, Miller penned a column assailing the Maryland law, asserting that it “endangers every single female.”

Yet Fox 5 failed to disclose that their purportedly straight news correspondent is on the record as vehemently opposed to the law. That's not just unethical; given the misunderstanding and animus the transgender community all too often confronts, it's also dangerous.