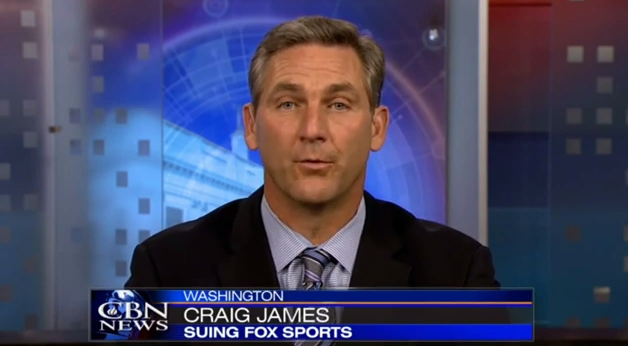 Craig James, the former Fox Sports football analyst who lost his job over homophobic comments he made as a U.S. Senate candidate, is headed to the Family Research Council (FRC), a notorious anti-gay hate group that frequently peddles anti-gay misinformation on Fox News.

In September, Fox Sports fired James after just one appearance as an analyst on the network, citing anti-gay remarks he made during his unsuccessful bid for the Republican nomination for the U.S. Senate from Texas in 2012. James called homosexuality “a choice” and stated that gay people “are going to have to answer to the Lord for their actions.” Explaining the network's decision to part ways with James, a Fox Sports spokesman told The Dallas Morning News, “We just asked ourselves how Craig's statements would play in our human resources department. He couldn't say those things here.”

James' firing made him a right-wing cause célèbre, with groups like the FRC condemning the network's move, depicting it as anti-Christian bigotry. Now, seven months after James' firing triggered a conservative outcry, the FRC is bringing him on board as an assistant to FRC President Tony Perkins, according to an April 8 press release:

Craig James, a Fox Sports football analyst who was fired after the network learned that he had expressed his views in support of natural marriage during his race for the U.S. Senate 18 months earlier, has joined Family Research Council (FRC) as an Assistant to the President. In this role, Craig will cultivate relationships with like-minded Americans across the country who share a common concern for the growing hostility toward free speech and religious liberty in the U.S. He will continue to share his own story of religious discrimination and educate Americans to the expanding threats to our First Freedom.

“We are very excited and pleased to announce that Craig James is joining Family Research Council's team,” said Family Research Council President Tony Perkins. "Losing one job because of his religious beliefs has made room for another: raising awareness about the threats to our most precious liberty - the freedom of religion. His leadership skills, his courage in the face of religious hostility, and his passion for faith, family and freedom will make him a great addition to the FRC team.

The FRC's anti-gay extremism has earned it a hate group designation from the Southern Poverty Law Center (SPLC). As the SPLC notes, the FRC has peddled the myths that gay people are disproportionately likely to be pedophiles, that a gay-inclusive military will endanger national security, that gay people aim to recruit children to their “lifestyle,” and that the gay “agenda” “will destroy them and our nation,” as Perkins declared in 2011.

In a bizarre turn of events, the kind of anti-gay extremism that got James fired from Fox Sports may end up getting him welcomed at Fox Sports' corporate sibling, Fox News. The network routinely hosts the FRC to comment on LGBT issues. FRC's Perkins just appeared on the April 7 edition of The Kelly File to blast non-discrimination protections for LGBT people.

Even as James begins his new job at the FRC, he continues to battle Fox Sports in court. In February, he filed a legal complaint with the Texas Workforce Commission alleging that he was the victim of anti-religious discrimination. It's unclear if his complaint against Fox Sports will affect FRC's relationship with Fox News, but his penchant for anti-gay rhetoric makes him a great fit at the notorious anti-gay hate group.