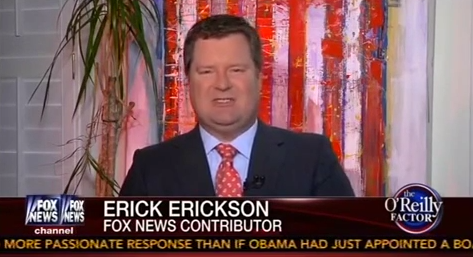 The Alliance Defending Freedom (ADF), a right-wing legal organization working internationally to criminalize homosexuality, plans to host “An Evening with Erick Erickson” next month. It's the latest sign that the Fox News contributor, who has previously touted ADF's work, is becoming a de facto spokesman for the group.

ADF plans to host the event - which requires a general admission fee of $25 - on April 24 at the Hilton Atlanta Northeast. According to the event's online registration page, the evening will focus on sharing “inspirational and motivational stories of victory” against the “increasingly aggressive attack” on religious liberty: 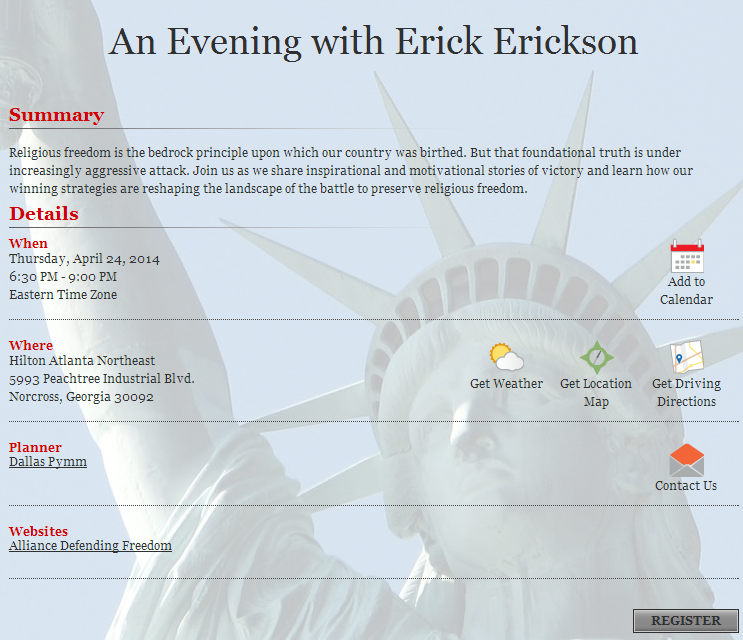 As the go-to legal organization for social conservatives, ADF has compiled a record of extreme anti-gay activism. The Southern Poverty Law Center reported in July 2013 that the group has worked to help criminalize gay sex in Belize. Benjamin Bull, the executive director of ADF Global, has applauded the criminalization of homosexuality in India and has traveled to Russia to meet with Yelena Mizulina, one of the authors of that country's notorious “gay propaganda” law.

Despite - or perhaps because of - ADF's extreme record, Erickson has established himself as one of the group's prominent supporters. In an August post for his RedState blog, he actually solicited donations for the organization, lauding its “lone and brace warriors” combating the “evil” campaign for LGBT equality. That solicitation came in response to a New Mexico Supreme Court ruling against an ADF client who refused to photograph a same-sex commitment ceremony.

Many Fox News personalities recoiled once they saw the kind of extreme anti-gay legislation ADF was trying to push through state legislatures, but Erickson did the opposite, becoming a de facto spokesman for the organization. By keynoting an ADF event, Erickson has made clear that his support for anti-gay discrimination goes beyond rhetoric - he's actually willing to work to fundraise for one of the country's most extreme anti-equality organizations.