Fox News' inaccurate, defamatory, and dehumanizing coverage of the transgender community contributes to transphobic violence and discrimination according to several groups working toward transgender equality.

Media misinformation about trans people dangerously permits disrespectful and sometimes violent treatment of trans people. Perhaps worse, though, is that Fox News intentionally misinforms people on issues like trans health care and employment, playing to prejudices they know are outdated. Fox News cements transphobia among the public and, in turn, stalls progress for a community struggling for basic acceptance. [Email exchange, 6/13/13, emphasis added]

These depictions perpetuate stereotypes about trans people and feed into a culture of discrimination.  They do nothing to enhance perceptions of trans people but rather, reinforce a system where the trans unemployment rate is twice that of the general population, where 1 in 5 trans people have experienced homelessness, and 19% have been refused basic medical care.  What Fox News should be doing is striving for coverage that really is fair and balanced.  Trans women are women and should be treated and depicted like any other women; trans men are men and should be treated and depicted like any other men; and those who fall in between should always be respected for the person that they are. [Email exchange, 6/18/13, emphasis added]

GLAAD: Fox's Coverage “Gives License For Continued Violence And Discrimination” Against Transgender People. Aaron McQuade, director of news and field media at the Gay & Lesbian Alliance Against Defamation, wrote in a statement to Equality Matters:

At a time when the trans community faces such high rates of violence, unemployment and inequality, Fox News' pattern of dehumanizing and spreading misinformation about trans people goes against the standards of good journalism and instead gives license for continued violence and discrimination against a community that instead deserves support and respect. [Email exchange, 6/14/13, emphasis added]

Hate violence is reinforced by vitriolic hate speech, where public figures accuse transgender people of being degenerates or freaks and mock and dehumanize them by calling them names such as “tranny” or “man in a dress” and suggest that sexual assault against transgender people is anything other than violence.  It is no surprise, then, that this culture of hate spawns acts of violence. And as we make progress across this country toward LGBTQ equality, we are seeing a backlash of anti-LGBTQ hatred such as the hatred spewed by Fox News.  And so this tells us:  we must hold Fox News accountable because they are complicit in this culture of hate. [Email exchange, 6/13/13, emphasis added]

People For The American Way: Fox's Coverage Does “Real Harm To Real People.” Michael B. Keegan, president of People for the American Way Foundation, wrote in a statement to Equality Matters:

From joking about 'the one part of Chaz [Bono] that hasn't been operated on' to questioning whether parents who support their transgender children are guilty of child abuse, Fox hosts and contributors push damaging myths about transgender Americans that do real harm to real people.  Millions of people watch Fox News. When it gives a platform to transphobic bigotry, it legitimizes these damaging views. Transgender Americans deserve dignity and respect in our country's media, not trivialization, mockery, and attacks. [Email exchange, 6/12/13, emphasis added]

Coverage that portrays transgender people in a negative light is not news, but propaganda that further stigmatizes a community which faces horrific violence and discrimination at alarming rates. Negative and inaccurate depictions of transgender people in the media are not only unethical, they are dangerous. [Email exchange, 6/12/13, emphasis added] 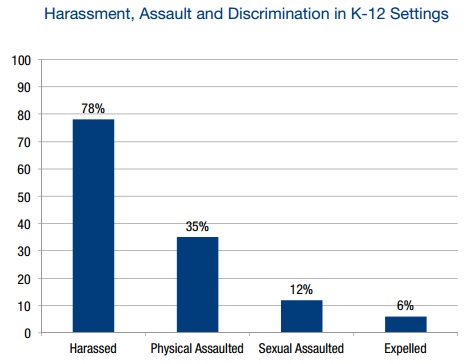 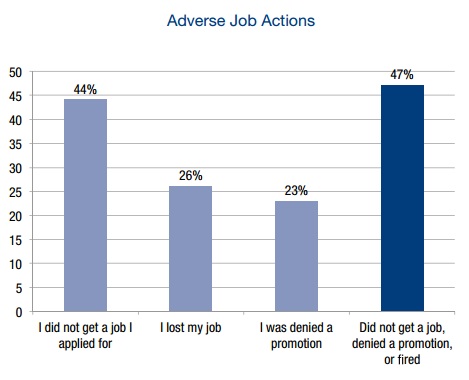 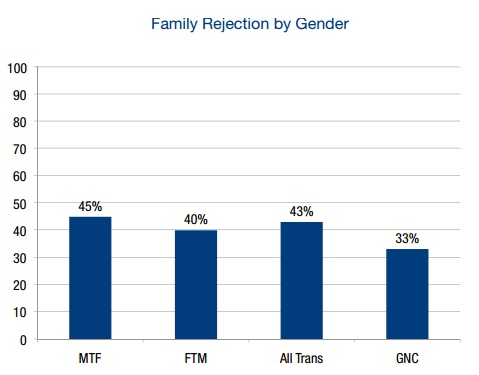 Report: Almost A Quarter Of Transgender People Experience “A Catastrophic Level Of Discrimination.” According to the 2011 NCTE and NGLTF report, a majority of transgender people who participated in the study reported at least one serious act of discrimination:

Sixty-three percent (63%) of our participants had experienced a serious act of discrimination - events that would have a major impact on a person's quality of life and ability to sustain themselves financially or emotionally. These events include the following:

Almost a quarter (23%) of our respondents experienced a catastrophic level of discrimination - having been impacted by at least three of the above major life-disrupting events due to bias. These compounding acts of discrimination - due to the prejudice of others or lack of protective laws- exponentially increased the difficulty of bouncing back and establishing a stable economic and home life. [NCTE/NGLTF Report, 2011, emphasis added]

Report: Transgender Women Made Up Half Of The Anti-LGBTQ Homicides In 2012. According to the annual Hate Violence Report by the National Coalition of Anti-Violence Programs (NCAVP), fifty-three percent of anti-LGBTQ homicides were transgender women, a thirteen percent increase from the previous year: 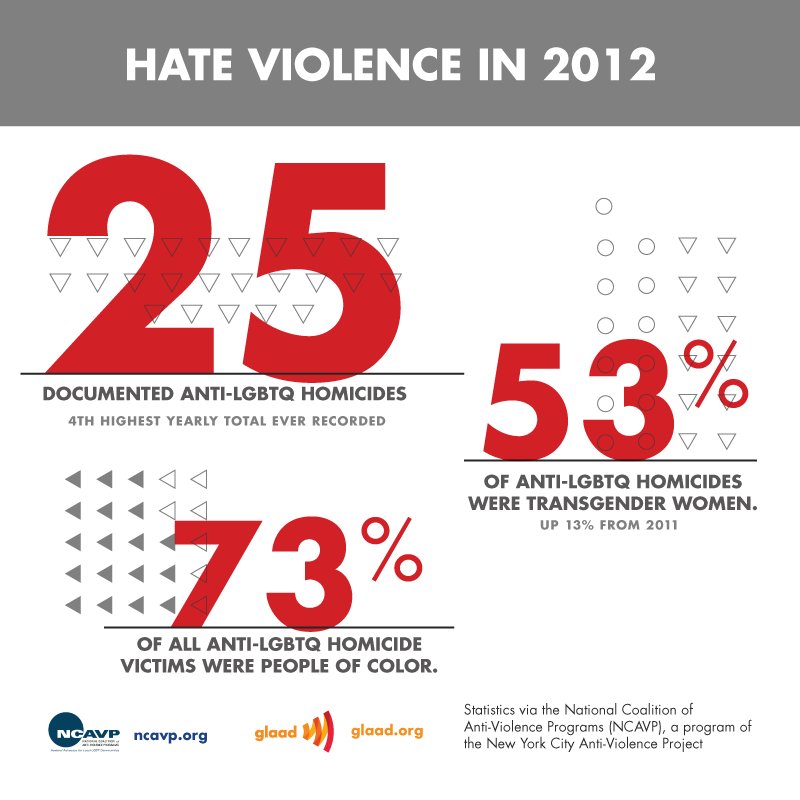