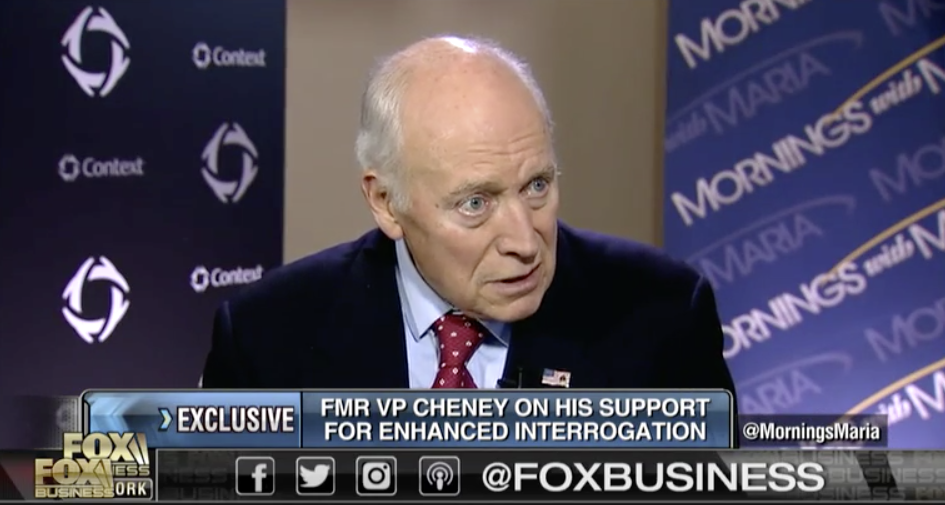 The torture program set up by the George W. Bush administration in the aftermath of the September 11 attacks was a brutal, illegal, and slipshod travesty for which there has been no reckoning. All of the people who designed, implemented, and justified the brutal and useless interrogations of terrorism detainees have successfully ducked accountability for a variety of reasons: Republicans actively support torture, Democrats voluntarily abandoned their opportunity to impose accountability for the program, and both parties are apt to excuse flagrant abuses committed in the name of “national security.”

This is why we have the grim spectacle of President Donald Trump (whose stated position on torture is that it should be used as sadistic punishment) nominating as CIA director Gina Haspel, who oversaw the torture of detainees and later led the effort to destroy videotaped evidence of interrogations. It’s also why former Vice President Dick Cheney can go on cable news and give lie-filled defenses of the horrific interrogation program he shepherded into existence.

Cheney sat down with Fox Business host Maria Bartiromo this week and oozed out a series of falsehoods about his torture program -- lies that elicited precisely zero challenges from Bartiromo. Let’s run through the many misleading claims and outright bullshit Cheney spewed in defense of his shameful legacy.

“It [the torture program] was set up in a way that what we did was, in fact, consistent with our fundamental statutes and agreements that were in place.”

The legal basis of the torture program was a dishonest and contradictory memo, drafted and acted upon in complete secrecy, that put the United States in direct conflict with the Geneva Conventions and served primarily to protect the people who wanted to make torture the policy of the United States. To protect CIA officials and political appointees from prosecution under the War Crimes Act of 1996, the Bush administration pushed legislation to redefine which acts constituted a violation of the Geneva Conventions. Cheney and crew did not act within existing law -- they concocted bizarre secret legal rationales and sought to change laws where necessary to protect themselves.

“And it [torture] worked. We were able -- waterboarding was applied, actually, to only three individuals. One of those was Khalid Sheikh Mohammed, the mastermind of 9/11.”

Torture did not work. Torture does not work.

The Senate Select Committee on Intelligence report on the Bush torture program found that it was ineffective at obtaining intelligence. The CIA officials who waterboarded Khalid Sheikh Mohammed quickly determined that the technique had “proven ineffective,” that they’d “lost ground” with Mohammed’s interrogation, and that “the potential for physical harm is far greater with the waterboard than with the other techniques, bringing into question the issue of risk vs. gain.” In the end, “no information provided by Mohammed led directly to the capture of a terrorist or the disruption of a terrorist plot,” per The New Yorker.

And Cheney would like everyone to focus on Khalid Sheikh Mohammed because he is genuinely evil and a high-ranking Al Qaeda terrorist -- someone who, per Cheney’s obvious implication, deserved to be tortured. He’d be less enthusiastic to talk about Abu Zubaydah, who was waterboarded 83 times and nearly drowned because the U.S. government believed he was a top-level Al Qaeda operative. He wasn’t, and the government has since acknowledged as much.

That’s to say nothing of detainees who were tortured and died while in U.S. custody. And let’s not forget the innocent people who were swept up by the government, like the Afghani man who was tortured so brutally that he begged his CIA interrogators to kill him, or the pregnant woman who was beaten in the abdomen and chained to a wall.

“He’s [Khalid Sheikh Mohammed] the guy who got waterboarded more than anybody else. I think what we did helped ultimately produce the intelligence we needed to be able to get [Osama] bin Laden.”

Nope. The Senate torture report debunked this claim, noting that “the most critical -- or the most valuable” information that led to bin Laden’s death “was not related to the use of the CIA’s enhanced interrogation techniques,” that the CIA was targeting the courier who ultimately led U.S. forces to bin Laden before any of its detainees provided information on him, and that “CIA detainees who were subjected to the CIA's enhanced interrogation techniques withheld and fabricated information about” the courier.

“If it were my call, I would not discontinue those [torture] programs. I’d have them active and ready to go. And I’d go back and study them and learn.”

This is an interesting comment in that Cheney’s desire to go back and “study” the torture sessions “and learn” from them at least sort of recognizes that they were a beastly disaster. Unfortunately, the current nominee for CIA director led the agency’s internal effort to destroy videotaped evidence of its torture sessions, which makes it more difficult to “learn” from the abuses it committed.

“If you know Khalid Sheikh Mohammed is the mastermind behind all of this, if you know he is number two to bin Laden in terms of the attack, if you know he’s probably the guy who knows more than anybody else except bin Laden what’s next, what’s their next target, how many people are they going to kill and how they are going to do it, and then you tell me that the only method we have is ‘please please pretty please tell us what you know.’ Well, I don’t buy that.”

This is Dick Cheney, a liar and a villain, falsely arguing that the only options available to interrogators were a) asking nicely and b) torture. If those were, in fact, the only options, then the case for torture would seem more plausible. But the Army Field Manual lays out a whole range of permissible interrogation techniques and details how to effectively use them. Right now, all military and intelligence personnel are legally bound to follow the Army Field Manual when conducting interrogations. And, as has already been established, Khalid Sheikh Mohammed’s interrogators quickly determined that torturing him wasn’t productive.

“I think the techniques we used were not torture.”

“A lot of people try to call it that, but it wasn’t deemed torture at the time.”

Cheney is referring here to SERE (Survival, Evasion, Resistance and Escape) training. And he is correct that the torture program was based on SERE training techniques, which are used to prepare American military personnel should they be captured and … you guessed it … tortured. To that point, the SERE program was developed based on interrogation methods used by the Chinese military which were designed not to extract information, but to elicit false confessions.

“The president signed off, I signed off, the National Security Council signed off. They did a good job, they got the intelligence they needed, and we were safe from any further mass-casualty attacks in the seven and a half years on our watch. Now people want to go back and try to rewrite history. But if it were my call, I’d do it again.”

It’s an amazing thing that the former vice president of the United States can go on TV and declare -- proudly -- that he and the president he served with made torture the official policy of the United States. It’s a howling outrage that a statement like this isn’t viewed as a confession of culpability in grotesque human rights violations. But that’s what happens when no accountability is imposed for one of the most shameful chapters in the war on terror.