For as long as the transgender community has fought for protection from discrimination in public spaces, conservatives have peddled the myth that sexual predators will exploit non-discrimination laws to sneak into women's restrooms.

That fear has been an extremely effective tool for scaring people into voting against even basic protections for transgender people, which is why conservatives routinely use the phrase "bathroom bill" to describe laws prohibiting discrimination in public accommodations. When conservative media outlets attack non-discrimination laws for transgender people, they almost exclusively focus on bathroom and locker room facilities.

But that fear is baseless - completely unsupported by years of evidence from states that already have non-discrimination laws on the books. In a new Media Matters report, experts from twelve states - including law enforcement officials, state human rights workers, and sexual assault victims advocates - debunk the myth that non-discrimination laws have any relation to incidents of sexual assault or harassment in public restrooms: The transgender bathroom myth is likely to persist, even in the face clear evidence that discredits it. That's because, unable to find real incidents to substantiate their fear mongering, anti-LGBT groups have taken to fabricating countless horror stories about trans-inclusive public restrooms. These stories are picked up and widely circulated by conservative (and occasionally mainstream) news outlets. By the time they're debunked, most of the damage to non-discrimination efforts has already been done.

Last year, for example, the Christian Broadcasting Network reported an incident in which a male student, claiming to be transgender, was allegedly harassing female students in the school's restrooms. The story was picked up by news outlets like the Daily Mail and Examiner and eventually made its way onto Fox Nation: 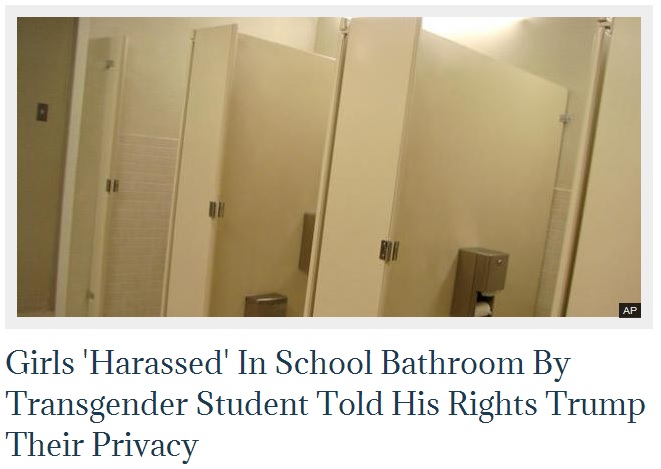 The story was a complete fabrication, manufactured by the Pacific Justice Institute (PJI), a hate group working to repeal a California law protecting transgender students. Cristan Williams, a reporter at The Transadvocate, reached out to the school's superintendent, who reported no incidents of harassment at the high school. Daily Mail took down its report on the incident, and Examiner published a retraction apologizing for its failure to fact-check the story. But Fox Nation didn't note the correction, and Fox's Sean Hannity continued to peddle PJI's discredited horror stories about trans-inclusive restrooms. Unsurprisingly, PJI's fears about trans-inclusive restrooms in public schools have turned out to be baseless.

In a statement to Equality Matters, Transadvocate's Williams described the problem of media outlets' willingness to promote wild stories about trans-inclusive restrooms without first verifying their accuracy:

In each case, an anti-LGBT group went to the media with an outlandish story about trans people who became wild after equality laws were passed and in each case, the media was eager to promote these stories without conducting proper fact checking.

PJI was only able to do what it did with the help of a credulous media that's ready and willing to print - without question - whatever ludicrous anti-trans claim these anti-LGBT groups come up with. It's a huge problem that does destroy lives.

Public restrooms aren't a new battleground for civil rights. Social conservatives frequently invoke “bathroom panic” to justify discrimination against marginalized groups. As Lambda Legal notes, the regulation of bathrooms has been used as a tool to exclude people of color, women, and people with disabilities from participating in public spaces.

But the claim that sexual predators will exploit non-discrimination laws to sneak into women's restrooms is a lie, plain and simple. It's a lie that is unsupported by even a shred of evidence and contradicted by years of experience in states that already have non-discrimination laws on the books. It's a lie that does tremendous damage to efforts to protect transgender people from violence and harassment, which often occur in public restrooms. And it's a lie that persists because conservative media outlets would rather tout made-up stories about sexual harassment than fact-check the anti-LGBT groups who invent those stories from whole cloth.