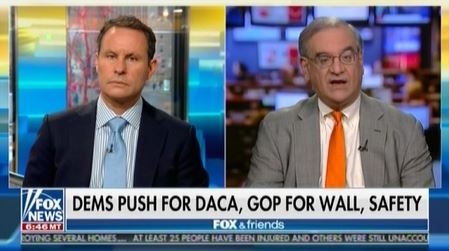 Cable morning news shows hosted pundits, journalists, politicians, administration officials, and one anti-immigration advocate to discuss immigration following President Donald Trump's meeting with lawmakers to negotiate the Deferred Action for Childhood Arrivals (DACA) program and comprehensive immigration reforms. But the shows excluded immigrants (including those directly affected by the termination of DACA) and experts from immigration advocacy organizations from the discussions, in turn favoring vapid talk about optics and omitting important context from their coverage.

Between January 10 and 11, CNN, MSNBC, and Fox News collectively hosted 35 guests that discussed Trump’s meeting with the lawmakers. The networks also covered news of a U.S. district judge’s injunction that blocked the Trump administration’s plan to end DACA, which effectively maintains protections for DACA recipients, or “Dreamers,” as the legal challenge proceeds.

None of the networks hosted immigrants or experts from immigration advocacy organizations, and discussions favored superficial optics coverage, with CNN’s Chris Cillizza remarking at one point that Trump deserved “style points” for the televised meeting.

This is not the first time news outlets have ignored the voices of those who will be affected by the Trump administration’s policy on immigration. But on the rare occasions that cable shows do host immigrants or immigration experts, audiences get a glimpse into how immigration policy decisions affect immigrants and American citizens alike. By failing to give a platform to people with personal experience with immigration policy to share their views, cable news outlets are missing a key part of the story.

Media Matters used iQ Media to review discussions about DACA, negotiations about DACA, or the U.S. district judge’s decision to block the plan to phase out DACA on the January 10 and January 11 editions of CNN’s New Day, MSNBC’s Morning Joe, and Fox News’ Fox & Friends and coded for guests. Discussions about the border wall or other aspects of immigration reform that did not mention DACA were not included.