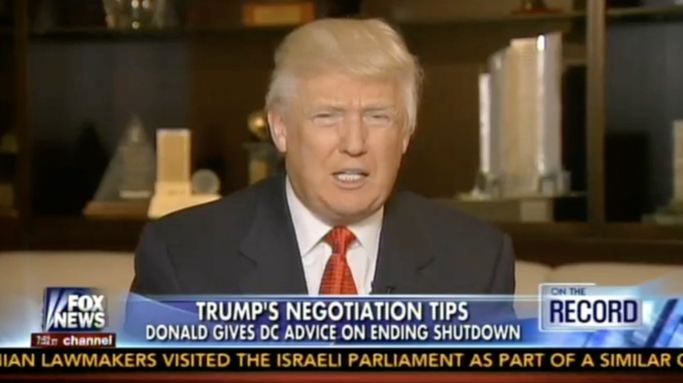 President Donald Trump’s favorite cable news show wants its viewers to know that he is not the one to blame for the government shutdown that began last night after White House chief of staff John Kelly helped shoot down a potential deal between Trump and Senate minority leader Chuck Schumer (D-NY). But Trump himself repeatedly argued on the network in the past that the president bears responsibility for government shutdowns.

Discussing the shutdown on this morning’s edition of Fox & Friends Weekend, co-host Pete Hegseth, a committed shill for the president, said that voters see “the utter dysfunction of the swamp, and they say, ‘that’s not what Trump wants, but that’s what Mitch McConnell and Chuck Schumer and others have been used to for decades. Stop the insanity and actually do something!’”

Co-host Rachel Campos-Duffy (who is married to Rep. Sean Duffy (R-WI)) chimed in, “While the Democrats may be getting blamed in the headlines, I do think in the end, everybody looks bad.” “That’s true,” Hegseth agreed, “I think, except for the president.” Campos-Duffy replied, “He brought Schumer in, he tried to make the deal happen.”

The president's favorite show says that he's the only one who doesn't look bad with the government shutdown. pic.twitter.com/idqi0FtrrF

The Fox shutdown spin stands in stark contrast to how Trump has discussed the issue on the network before he became president. Trump specifically said that the president is the one responsible for averting a shutdown in a series of Fox appearances around the time of the 2013 government shutdown, as Media Matters’ John Whitehouse pointed out this morning:

what kind of idiot would ever say the responsibility for ending a government shutdown is on the president of the united states? (10/8/13) pic.twitter.com/ldNbZdLz4B

trump to fox & friends during a government shutdown: “the right guy” as president would get everyone in a room and make a deal (10/7/13) pic.twitter.com/ZNqOvcrumS

during the 2013 shutdown, trump went from show to show on fox talking about how it's solely on the president to make a deal that's good for everybody (10/7/13) pic.twitter.com/BY8w15YLzp

Fox & Friends: Who gets fired if there is a government shutdown?

Trump also talked up the benefits of a shutdown after becoming president, tweeting in May:

The reason for the plan negotiated between the Republicans and Democrats is that we need 60 votes in the Senate which are not there! We....

either elect more Republican Senators in 2018 or change the rules now to 51%. Our country needs a good “shutdown” in September to fix mess!

Trump, of course, has since changed his tune, blaming Democrats both before and after the shutdown went into effect, even as his own shifting negotiating position makes deal-making dramatically more complex because he can’t be trusted to stick to bargains.

In fact, Trump was live-tweeting this Fox & Friends Saturday segment and others all morning, parroting the Fox co-hosts’ attacks on Democrats over the shutdown in real time:

Hegseth: “What Democrats care most about is making illegal immigrants legal. That's what it's all about.”

Campos-Duffy: “And if you wanted a deal for DACA, the deal is there! The deal has been spelled out by the pres.”
Right, Trump, 6:17 am pic.twitter.com/wQuhbnvQxt