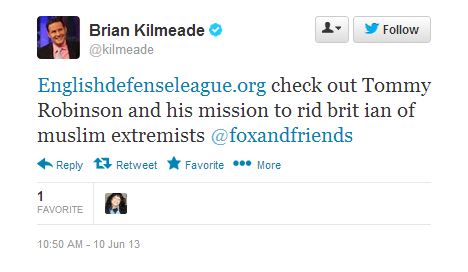 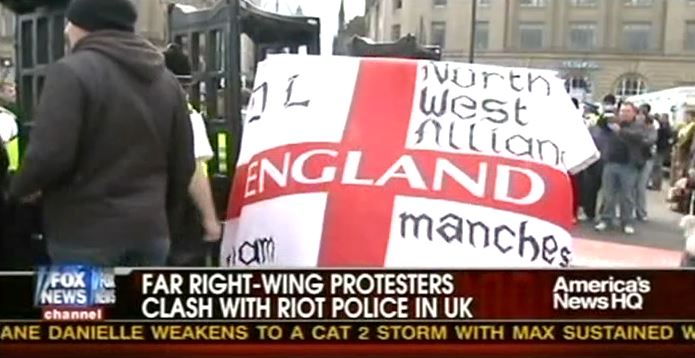 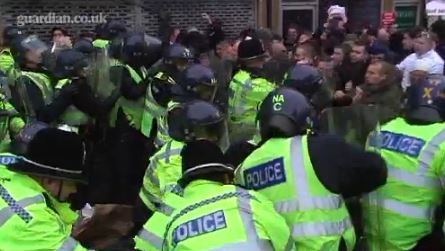 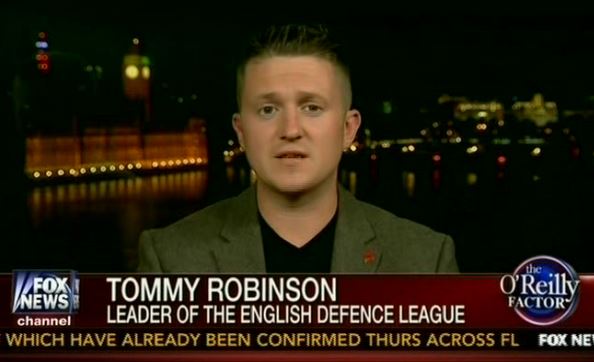 Fox News host Brian Kilmeade told the leader of a violent nationalist hate group that targets British Muslims, “We got your back” and “it's great what you're doing.”

Kilmeade offered his endorsement to the English Defence League (EDL) and co-founder Tommy Robinson, who appeared as a guest on the June 10 edition of Kilmeade's Fox News Radio program. Kilmeade's support followed an interview in which Robinson railed against the immigration of Muslims into the United Kingdom, and warned of Muslims “forcefully putting us under Sharia” Law and planning a “silent takeover” to “implement Sharia” in his country and across the world.

Robinson (whose real name is Stephen Lennon) also said he didn't regret his recent conviction for using a false identity document to enter the United States to attend an anti-Islam event with anti-Islam blogger Pamela Geller. Robinson pleaded guilty and was jailed in January and released in February. Robinson's offense was not his first brush with the law.

Fox News has previously reported on the violent and fringe nature of the EDL. On August 28, 2010, America's News HQ anchor Gregg Jarrett noted there were “hundreds of extreme right-wing protesters rioting in northern England. Members of the so-called English Defence League tossing bottles and rocks at police in the city of Bradford. There's the map. Police penned the group in, keeping them away from a separate rally headed by a leftist group. The English Defence League opposes what it calls the spread of Sharia Law and Islamic extremism in England. Police arrested five people, but there are no reports of any injuries.”

Several other news outlets have similarly described the EDL as a violent and extreme anti-Muslim group:

Despite the group's extreme ideology and violent nature, Kilmeade gave Robinson an enthusiastic and unchallenged platform for nearly 15 minutes to rail against Muslims. Among Robinson's claims:

At the conclusion of the interview, Kilmeade told Robinson: “Well Tommy, we got your back, and we'll definitely look to keep in touch and I really think it's a very -- it's great what you're doing.” After the interview, Kilmeade tweeted: “Englishdefenseleague.org [sic] check out Tommy Robinson and his mission to rid brit ian [sic] of muslim extremists @foxandfriends."

The Guardian reported today that the BBC has been recently criticized for “giving an uncritical platform to” Robinson, “who was interviewed on the Radio 4 Today programme on Tuesday morning. ... He admitted that the organisation has 'completely questionable' tactics and said 'the non-Muslim working class don't have a voice' and warned 'it's not going to end pretty'.”

Kilmeade, who also co-hosts Fox & Friends, has a long history of pushing Islamophobia on Fox News. For instance, Kilmeade has (twice) claimed that “all terrorists are Muslims,” proposed bugging U.S. mosques, and said that Muslims “have to understand” they're being profiled because of “the war that was declared on us.”

Listen to Kilmeade's full interview with the EDL's Tommy Robinson from the June 10 edition of Fox News Radio's Kilmeade & Friends:

"If they did they would know his name was Stephen Lennon and he has several convictions for violence, including being imprisoned for attacking a police officer.

“I would like to think that if they knew about the EDL then they would know that its supporters have been involved in murders, arsons and violent assaults. However, Fox News has a track record of providing platforms for the so-called 'Counter-Jihad' movement and Islamophobes and so their understanding of the EDL leader is depressingly predictable.”

Faith Matters director Fiyaz Mughal, who co-ordinates the Islamophobia monitoring group Tell Mama, has appeared on news programmes with Robinson. He told HuffPost UK: "Tommy Robinson, seems to be an angry young man whose fixation on Islam and Muslims is not healthy for communities, nor for himself.

“Whilst pleasant and courteous, he nonetheless is part of the ratcheting up of tensions through his far right group.”