On Fox & Friends, Fox Business' Stuart Varney argued that it is “inaccurate” to attribute the recession to President Bush and claimed that “President Obama's policies have not fixed that ongoing recession.” In reality, Obama's policies have created growth in the GDP and the Dow Jones Industrial Average, while turning around the increases in joblessness that began under Bush.

Varney: “President Bush fixed the financial panic,” while the “economy fell off a cliff on President Obama's watch”

From the July 30 edition of Fox & Friends:

BIDEN [video clip]: There's never enough until we restore the eight million jobs lost in the Bush recession. Until that happens, it doesn't matter. I mean, it matters, but it's not enough.

DOOCY: Did he say the Bush recession? Stuart Varney is laughing off camera and he is now on camera to tell us what's going on here. OK, so now, forget about just blaming Bush. Now Mr. Bush has got a recession named after him.

VARNEY: Let me get my line in here. The president is on a summer recovery tour. The vice president seems to be on a summer comic relief tour. He says it's Bush's recession, harking back two years ago. I think that's inaccurate. President Bush fixed the financial panic. The economy fell off a cliff on President Obama's watch, and President Obama's policies have not fixed that ongoing recession.

NBER: Recession began in December 2007, more than a year before Obama's presidency began

After steadily increasing in 2008, new jobless numbers have dropped significantly in the time since Obama took office. As data from the Bureau of Labor Statistics (BLS) show, new jobless numbers increased in seven of the last eight months of Bush's term, from just under 200,000 jobs lost June of 2008 to around 800,000 lost in January 2009. The data show that in the time since President Obama took office, new jobless claims have significantly decreased, and, beginning in November 2009, there has been a net increase in employment. From a BLS news release on the June 2010 jobs report: 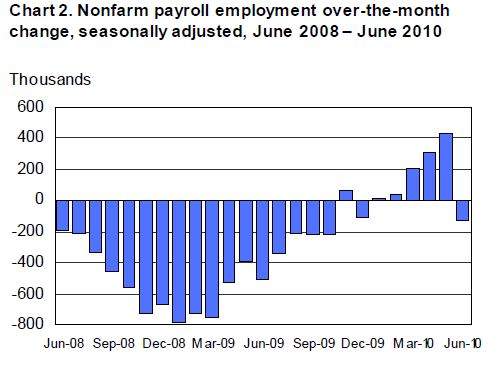 After falling “off a cliff” in October 2008, the stock market rebounded following the passage of Obama's stimulus plan. In the fall of 2008, the Dow Jones Industrial Average (DJI) nosedived, dropping 2937.25 points in just two weeks (September 26 to October 10). The Dow continued its downward trend through March 6, 2009, when it bottomed out at 6626.94 points, two weeks after President Obama signed the stimulus bill into law. Since then, the DJI has steadily increased, gaining 26.6 percent in the time since Obama took office, and 33.5 percent since the stimulus was enacted (as of 11:21 am ET on July 30). 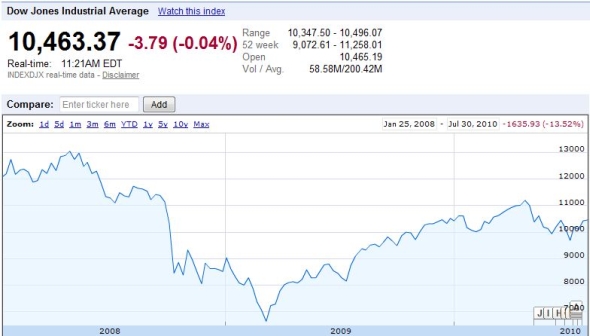 Moody's study shows government's policy response to the recession “probably averted ... Great Depression 2.0.” A recent study by Alan Blinder, the president of Bill Clinton's Council of Economic Advisers, and Mark Zandi, the co-founder of Moody's Economy.com, simulated the “macroeconomic effects of the government's total policy response” to the recent economic downturn and found that while “TARP, the bank stress tests and the Fed's quantitative easing” was “substantially more powerful than” the fiscal stimulus, “the effects of the fiscal stimulus alone appear very substantial, raising 2010 real GDP by about 3.4%, holding the unemployment rate about 1½ percentage points lower, and adding almost 2.7 million jobs to U.S. payrolls.”

Wall Street Journal: 70 percent of economists surveyed said stimulus helped. The Wall Street Journal reported on March 12 that 38 of the 54 economists it surveyed “said the American Recovery and Reinvestment Act boosted growth and mitigated job losses, while six said the legislation had a net negative effect.”

NABE: 83 percent say stimulus raised GDP. A February survey of 203 members of the National Association for Business Economics (NABE) found that, "[e]ighty-three percent believe that GDP is currently higher than it would have been without the 2009 stimulus package (ARRA)."

Doocy and Varney: You “can't prove” that the stimulus saved or created jobs because that “metric does not exist.” From the July 30 edition of Fox & Friends:

VARNEY: There's a lot of things that the vice president has come out with which really do offer a little comic relief. Three million jobs saved or created because of the stimulus plan.

DOOCY: Which is a metric that does not exist.

VARNEY: You can't prove that. You can laugh at it, but you can't prove it. “The stimulus plan is working better than anyone had hoped for.” Really? I mean, come on.

DOOCY: Yeah, can we vote on that? Well, Stuart, if you -- just imagine, if you were in the White House, what are you gonna do? Are you gonna say “Yeah, we're sorry that we're stinking up the place when it comes to job creation. Oh, let's blame the last guy.”

VARNEY: You have got to defend the policies which you put in place. So you go back to the last guy and say it's his fault, and we're cleaning up the mess.

Agriculture Under Secretary Thomas C. Dorr today announced the award of $19.75 million to create or retain jobs at rural businesses.