The announcement that Eric Holder would resign as attorney general was met by renewed attacks on his tenure by conservative pundits, continuing a long tradition of ugly right-wing smears against President Obama's top law enforcer. Here is a selection of the worst villains that right-wing media have compared Holder to over the years:

In a June 5, 2013 fundraising email, Fox News contributor and former Republican Congressman Allen West claimed Holder was a “bigger threat to our Republic” than terrorist Ayman al-Zawahiri, who took control of al Qaeda after Osama bin Laden's death. West also suggested Holder was guilty of treason. On June 7, he appeared on Fox & Friends to discuss his smears with sympathetic co-host Brian Kilmeade.

On the January 10 edition of his radio show, Rush Limbaugh called Holder a “Stalinist” for announcing that the federal government will recognize same-sex marriages in Utah.

LIMBAUGH: Eric Holder, the Attorney General of the United States says that the federal government will recognize same-sex marriage in Utah for the purpose of federal benefits despite the Utah governor's directive not to, pending the Supreme Court's review of the state's ban. So the states, when you've got people like Holder and Obama in office, it doesn't matter what governors do, it doesn't matter what the people of the state want. What Holder and Obama want is what's going to happen. Holder does not have this kind of power or authority but he does if nobody's going to stop him or challenge him.

LIMBAUGH: You have the Attorney General engaging in executive actions, executive orders. Just as if Obama were to do it. Stalinists, folks.

It was 50 years ago this June that George Wallace, the Democratic governor of Alabama, made his infamous “stand in the schoolhouse door” to prevent two black students from enrolling at an all-white school. His slogan was “Segregation now, segregation tomorrow, segregation forever!”

These many years later, Democrats still are standing in the schoolhouse door to prevent black students from enjoying the educational benefits available to their white peers, this time in Louisiana instead of Alabama. Playing the Wallace role this time is Eric Holder, whose Justice Department is petitioning a U.S. district court to abolish a Louisiana school-choice program that helps students, most of them black, to exit failing government schools.

On the August 22 edition of Fox News' The Five, co-host Andrea Tantaros claimed in a discussion about the protests in Ferguson, MO that “Eric Holder is one of the biggest race-baiters in this entire country.” She added that Holder runs the Department of Justice “like the Black Panthers would...allowing them to be outside that polling place was absolutely abominable” -- a reference to a favorite Fox smear that Holder improperly dismissed voter intimidation charges against members of the New Black Panther Party.

Washington Times columnist and National Rifle Association board member Ted Nugent claimed Obama's decision to have Holder and Vice President Biden lead the administration's gun safety task force was akin to “hiring Jeffrey Dahmer to tell us how to take care of our children.”

In 2011, Mike Vanderboegh, a blogger featured on Fox News, repeatedly posted a manipulated photograph of Eric Holder dressed in a Nazi uniform: 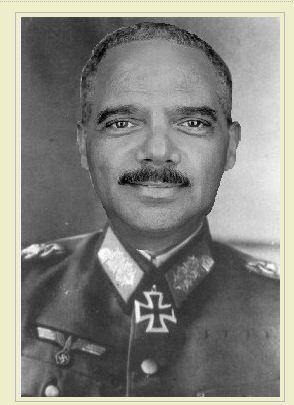