Right-wing media are once again attacking President Obama over his vacations, this time for planning a “staggering” 17-day holiday trip to Hawaii. But vacations of that length are not unprecedented; President Reagan took a 25-day vacation in August 1983, and President George W. Bush took 27-day and 25-day vacations in August 2001 and August 2002, respectively.

While most Americans are lucky to get a few weeks of holiday every year, it seems the country's leader gets a little more freedom in the matter.

President Barack Obama has announced his Christmas vacation to Hawaii - for a staggering 17-day trip.

Obama, who visited the island just two weeks ago for an economic summit, will head to Honolulu on Saturday December 17 until Monday January 2. [Daily Mail, 12/3/11]

Perino: “I Thought It Was A Joke” Or A “Typo” That Obama's Vacation Is 17 Days. On the December 5 edition of Fox News' Fox & Friends, Fox News host Dana Perino said:

PERINO: What I love is they announce this on a Friday night. So, in the morning, we got the jobs numbers and they were like, whew, 9 percent to 8.6 percent -- our work is done here. We are going for a little vacation. I thought it was a joke. I thought it was maybe, like, even a typo that 17 days -- because if you think back to Martha's Vineyard vacation, it's not like they were going someplace just for a few days where you are going to be with the 99 percent. [Fox News, Fox & Friends, 12/5/11, via Media Matters]

Fox's Hayes: “The Average American Is Going To Look Up And Say, 'Well, Why Is My President Taking 17 Days Off When We've Got Unemployment Still At Nearly 9 Percent?' ” During the December 4 edition of Fox News' Fox & Friends Sunday, Fox News contributor Steve Hayes said that Obama's vacation is not a “problem on substance” but that "[t]he message it sends, I think, has to be worrying to the White House." From Fox & Friends Sunday:

HAYES: The message it sends, I think, has to be worrying to the White House. This is a president who said he would keep Congress in Washington because there was so much work to be done, and yet he then announces that he's going away for 17 days. It's the kind of thing that the average American is going to look up and say “well, why is my president taking 17 days off when we've got unemployment still at nearly 9 percent?” [Fox News, Fox & Friends Sunday, 12/4/11]

Powers: “Obama To Congress: We May Need To Stay In DC And Work Through The Holidays - If You Need Me, I'll Be In Hawaii.” In a December 3 post to Michelle Malkin's website, Doug Powers wrote:

Stressing the importance of extending the payroll tax cut and unemployment benefits, President Obama said he expects all involved parties to work through the holidays if necessary.

Obama's schedule indicates he's completely serious about that, as long as “we” is defined as “everybody except me”:

No worries though -- Autopen is warming up in the bullpen and should be ready to go soon. [MichelleMalkin.com, 12/3/11] 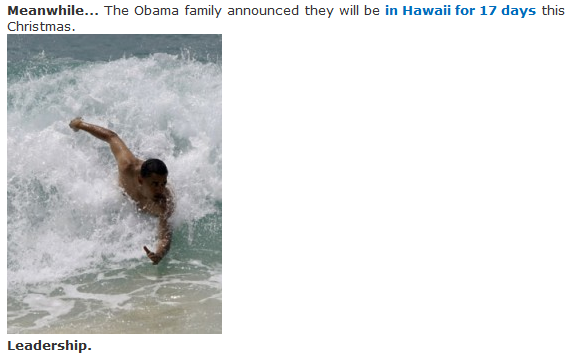 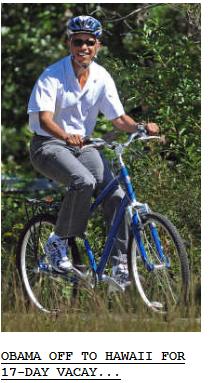 Big Government: “Barack Obama Will Take A 17 Day Vacation In Hawaii Over The Holidays. Can't Let A Payroll Tax Extension Get In The Way Of A Few Rounds On The Links.” From a December 3 Big Government post:

“We need to get this done. And I expect that it's going to get done before Congress leaves. Otherwise, Congress may not be leaving and we can all spend Christmas here together.”

Apparently, Congress will be adjourning to Hawaii, because the White House announced tonight that Barack Obama will take a 17 day vacation in Hawaii over the holidays. Can't let a payroll tax extension get in the way of a few rounds on the links. Nice work if you can get it. [Big Government, 12/3/11, emphasis in original]

Reagan Took 25-Day Vacation In August 1983 With Unemployment At 9.5 Percent. An August 22, 1983, Washington Post article reported that former President Ronald Reagan took a 25-day vacation to his “mountaintop ranch northwest of Santa Barbara.” The Post further reported that “his top advisers ... decided to put an end to what one of them calls 'unnecessary news stories.' ” At the time, the unemployment rate stood at 9.5 percent. From the Post:

As President Reagan relaxes on his mountaintop ranch northwest of Santa Barbara, tucked away from the workaday cares of Washington, his top advisers have decided to put an end to what one of them calls “unnecessary news stories.”

The negative news coverage that the president abhors was a topic of discussion at a White House breakfast the day before Reagan left on his present 25-day trip, the 17th stopover at his ranch since his election. [The Washington Post, 8/22/83, via Media Matters]

Like much of official Washington, President Bush is about to leave for his summer vacation. The White House is emphasizing that it will not be all fun and no work.

Administration officials clearly are sensitive to any criticism that Bush's 25-day break at his ranch near Crawford, Texas, is too long, given the economy and the threat of terrorism.

White House Press Secretary Ari Fleischer said Wednesday: “You know, Washington is just a silly town sometimes where people don't let a good man have a vacation without having to make more of it than it is.” [The Los Angeles Times, 8/1/02]

Just as he did last year during a 27-day summer stay at the ranch, Bush is planning several days of travel beyond Crawford. On these trips, he will give policy speeches and headline political events. His plans include a three-day West Coast swing in late August.

AP: Obama's Vacation “May Be Delayed By Unfinished Business With Congress.” From a December 2 Associated Press article:

The [payroll] tax cut, due to expire on Dec. 31, “hasn't stimulated the economy at all,” said Rep. Louie Gohmert of Texas, one of several Republicans who emerged from a closed-door meeting and spoke unfavorably about the proposed extension at the heart of President Barack Obama's jobs program.

If Congress fails to deliver the legislation to his desk before its scheduled adjournment for the year, “we can all spend Christmas here together,” said the president.

Obama is scheduled to leave on Dec. 17 for a Christmas vacation in Hawaii with his family and friends, spokesman Josh Earnest said. Those plans may be delayed by unfinished business with Congress, as it has been in the past. [AP, 12/2/11]

First lady Michelle Obama and her two daughters are scheduled to leave Saturday for an end-of-the-year vacation in Hawaii.

When President Obama might join them remains a mystery.

It all depends when Congress finishes its work, including two Senate items that Obama is pushing hard: Ratification of an arms cut treaty with Russia, and repeal of the military's “Don't Ask, Don't Tell” policy toward gays.

Obama will be on the phone in the next few days discussing these and other issues with key senators. [USA Today, 12/17/10]

MacCallum On Obama's August Vacation: “Do You Think He Doesn't Care Enough To Change The Plans?” During the August 24 edition of Fox News' America's Newsroom, co-host Martha MacCallum stated:

MacCALLUM: I'm one of those who believes every president deserves a vacation, you know. This is an extremely difficult, high-pressure job. His family needs to get out of the White House, and they need to spend some time together. But you've got this really difficult week that's been happening. Libya, the earthquake, and now this Hurricane Irene that's bearing down on the East Coast. How bad are the optics of bike riding with your daughter and, you know, just sort of chit-chatting and eating ice cream at this hour?

Judy Miller: “I Don't Begrudge [Obama] A Vacation ... But, Martha's Vineyard?” During the August 20 edition of Fox News' Fox News Watch, Fox News contributor Judy Miller criticized the president for his summer vacation, spent on Martha's Vineyard with his family. From the broadcast:

MILLER: Look, I don't begrudge the president a vacation. I want him to take a vacation. I think everybody needs a little time off now and then. Even a cigarette I would give him, but Martha's Vineyard when the country is suffering the way it is? I don't' know, I'd rather -- I'd rather see somebody down on a ranch in Texas. [Fox News, Fox News Watch, 8/20/11, via Media Matters]

Fox's Steve Hayes: “The Images And Optics” Of Obama's Vacation Are “Bad For Him Politically.” During the August 19 edition of Fox News' Special Report, Fox News contributor Steve Hayes said: “I don't begrudge the president of the United States an opportunity to take a vacation. He deserves one. But the images and the optics on this one are bad for him politically.” [Fox News, Special Report, 8/19/11, via Media Matters]