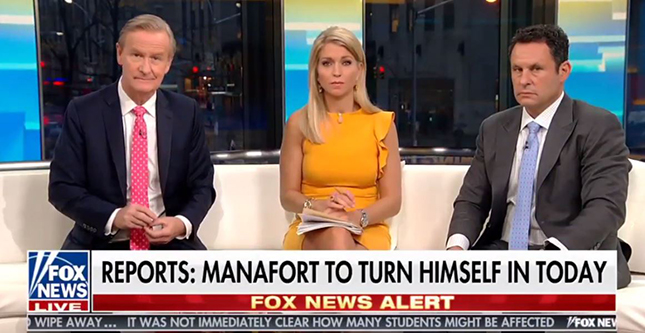 Just before 8 this morning, The New York Times broke the news that five months into a sprawling investigation into ties between President Donald Trump’s campaign and Russian officials, special counsel Robert Mueller was filing charges against former Trump campaign manager Paul Manafort and his business associate and fellow campaign aide Rick Gates. On CNN and MSNBC, the indictment and pending arrests dominated coverage for the rest of the morning, as anchors, reporters, and legal analysts explained who the pair are, what the charges could concern, and what the news could portend for the future of Mueller’s investigation.

But viewers of Fox News’ morning show, Fox & Friends, saw something very different. Co-hosts Steve Doocy, Ainsley Earhardt, and Brian Kilmeade spent the last hour of their broadcast alternatively downplaying the news and looking for potential outs for the president. The program’s hosts and guests warned that the investigation was a case of the dangerous criminalization of political differences, complained that aggressive prosecutors sometimes coerce false confessions, posited that the charges might actually be good news for the president, and suggested the real scandal was that news of the indictments had been illegally leaked. They quickly changed the subject to trumped-up scandals involving Democrats. As their competitors rightfully focused on the breaking news, the show found time to discuss top Halloween candies and small-bore stories of purported liberal media bias.

On Twitter, as screenshots and video clips of the bizarre antics circulated, many reporters for more credible outlets mocked the Fox & Friends coverage for leaving their viewers ignorant of the gravity of the news. Others hoped that the Mueller news could alert Americans as to which media outlets act as propaganda tools of the president. “Also a good time for public to see which media outlets have been reporting the actual story vs which are obedient vassals of people in power,” tweeted CNN anchor Jake Tapper.

Neither response fully comes to grips with the comprehensive media bubble conservatives have constructed over the past few decades. It is not currently possible to form a consensus around what is happening in our politics. Instead, there’s a mainstream media narrative that generally conforms to reality and a counter narrative generated by right-wing media outlets that supports Trump regardless of the facts.

Fox & Friends exists to further that alternative media reality, and a day like today shows how it does that. The point of the show is to deceive the audience, not to inform them. And the hope that the viewers of this program and others like it would suddenly realize after the indictments that they had been misled, while well-meant, is far-fetched. As this morning’s Fox & Friends demonstrated, those who consume this content will receive a hefty helping of explanations saying the indictments aren’t a big deal, Democrats and Mueller himself are the real criminals, and the major news outlets are covering up the real story because of partisanship and corruption.

The paranoid right-wing opposition to the mainstream press, stoked for generations for reasons both partisan and economic, is at the heart of the problem. Conservative leaders created their own media in response and implored their followers to seal themselves off from contrary voices. As conservative commentator Charlie Sykes put it, the result was a right-wing media bubble in which people like Rush Limbaugh and the hosts of Fox News “convinced their audiences to ignore and discount anything that came from the mainstream press,” with a “cumulative effective” being that they “destroyed much of the right’s immunity to false information.” This effort has been helped along by the president’s own attempts to delegitimize critical media outlets.

For months, Fox & Friends and other parts of the pro-Trump media sphere have been preparing for a day like today. They’ve declared Mueller’s an investigation a sham, laid the groundwork for his removal, and explained that Hillary Clinton is the real criminal who needs to be locked up. They’ve primed their audience to discount any scrap of information suggesting presidential wrongdoing. If Trump fires Mueller and pardons everyone touched by the investigation, his media propagandists will follow along and bring their audiences with them. There’s no popping the right-wing media bubble. It was built for a day like today.