Members of the right-wing and pro-Trump media -- typically the self-proclaimed vanguards of “free of speech” -- are lining up to attack protesters who are exercising their First Amendment rights by voicing their opposition to Supreme Court nominee Brett Kavanaugh. They’ve attacked protesters as “venomous” and “dangerous” and even leveled sexist digs at female protesters, saying that they “are showing how truly ugly women can be.”

Wash. Post: “Capitol Police officers ... have been a fixture against the back wall of the hearing room, poised to quietly haul out protesters” as confirmation hearings continue. According to The Washington Post, on the first day of the Kavanaugh confirmation process, there were an “unusually high number of protesters” who interrupted the hearings, and protests “are likely to continue to punctuate the Senate debate about Kavanaugh’s legal theory and judicial opinions” as the process moves along. [The Washington Post, 9/5/18, 9/6/18]

Fox’s Lou Dobbs called the peaceful protests “the ugliest thing I’ve ever seen” and “a group of leftists attacking the Senate Judiciary Committee ... and the nation.” Judicial Watch’s Tom Fitton responded by linking the protesters to “violence, intimidation, and lawlessness.” From the September 4 edition of Fox Business’ Lou Dobbs Tonight:

NRATV’s Chuck Holton: Female protesters “are showing how truly ugly women can be.” 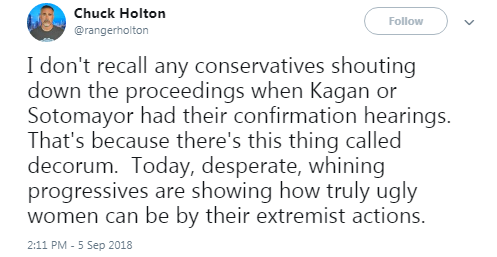 NRATV host complained about “the shrieking shrill of women” protesters during the confirmation hearings. From the September 5 edition of NRATV’s Stinchfield:

Fox’s Greg Gutfeld: “The protesters, I think they’re giving protests a bad name. … All these lonely cranks get together and they scream like hyenas in a bear trap.” From the September 5 edition of Fox News’ The Five:

The Resurgent’s Erick Erickson attacked protesters as being too “elitist.” 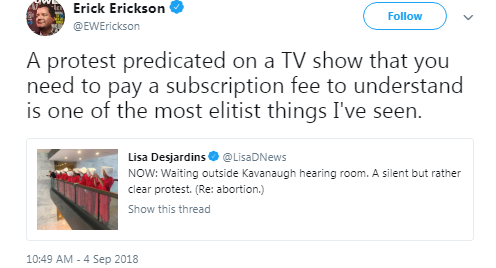 Fox’s Ed Henry claims protesters are “paid to disrupt,” citing “people” who “are saying they have seen other get paid cash to wait on line and then cause trouble.” In fact it's common practice for hearing watchers to pay people to hold their place in line. From the September 5 edition of Fox News’ Hannity:

Fox's Ed Henry is reporting that Kavanaugh protesters were paid

His sources for this claim are “people” who “are saying they have seen other get paid cash” pic.twitter.com/8IBwZjX8pO