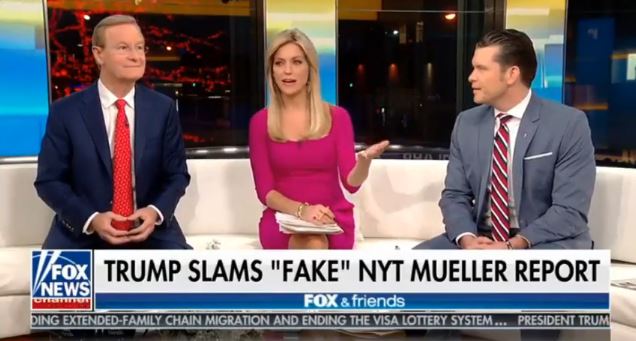 The revelation that President Donald Trump ordered the firing of special counsel Robert Mueller last June only to reverse course when the White House counsel threatened to resign rather than carry out that order is currently dominating the news cycle. The story was first reported by The New York Times and has since been confirmed by several other outlets. But if you tuned in this morning to the president’s favorite news show, Fox News’ Fox & Friends, you may have missed the news.

The program barely mentioned the story this morning, giving it a total of six minutes and 16 seconds of discussion* over the course of three hours. Co-hosts Steve Doocy, Ainsley Earhardt, and Pete Hegseth regularly shill for the president on matters large and small, but -- like some of their colleagues -- seemed baffled as to how to spin the Mueller report in Trump's favor. They alternated between suggesting that everyone should take the president at his word that the story is “fake news,” claiming that even if it did happen it was no big deal, and saying that no one cares about it. Notably, the hosts largely avoided discussing the portion of the story in which White House counsel Donald McGahn threatened to resign rather than ask the Justice Department to dismiss Mueller.

Fox & Friends opened its 6 a.m. hour by mocking the Times’ story and highlighting the president’s response.

Fox & Friends on Trump trying to fire Mueller: “Well, the president says it's fake news, that happened last June, it's something we have to tell you about because it's a headline on the NY Times. What do you think about that? Do you even care?” pic.twitter.com/4nPB5sv6Fs

In rapid succession, Hegseth said the report was “typical New York Times” because it was based on anonymous sources, claimed that it “screams of a leak from the special counsel,” and suggested it was old news because reporting at the time indicated that “the president wasn't happy with Bob Mueller” before concluding that the Times provided “some new details that may or may not actually be true.”

Earhardt then promptly moved on, saying: “All right, well, the president says it's fake news. That happened last June. Do you -- it's something we have to tell you have about because it is a headline on The New York Times. What do you think about that? Do you even care? Something you probably do care about is immigration.” The hosts did not reference Fox chief national correspondent Ed Henry’s report last night confirming that the White House counsel and other aides had talked Trump out of firing Mueller.

And that one-minute 13-second discussion was basically it for the program’s coverage of the story in the first hour (aside from a passing mention in an unrelated segment and an insipid tease of the second hour). While MSNBC and CNN covered the news far more extensively, Fox & Friends quickly moved on to stories more promising for its audience, including segments on “downfalls of the single-payer system” and how New York Gov. Andrew Cuomo “wants free college for Dreamers.”

As of 6:30 am, that one minute 13 second segment is Fox & Friends' entire coverage of Trump trying to fire Mueller. Here's what they're covering instead. pic.twitter.com/mf7RCk3Ixa

The second hour of Fox & Friends brought another brief discussion of the story, as Fox chief White House correspondent John Roberts, who is with Trump at the World Economic Forum in Davos, Switzerland, said the president had been “dealing with” the story that day and confirmed that the president had discussed firing Mueller last summer. With that, Doocy changed tacts, asking Roberts, “Doesn't the president of the United States have the authority to fire anybody in the administration he wants to?” Roberts replied that the president could ask Deputy Attorney General Rod Rosenstein to fire Mueller, but could not do it directly.

Hegseth then again mentioned that the president had called the story “fake news,” before saying that even if it is true, it’s not worthy of the level of attention it has gotten from the “fake news, so-called mainstream media.” According to Hegseth, “It's a huge difference between talking and taking action,” and because the president hadn’t actually fired Mueller, “we didn’t learn anything new” from the Times report.

“He says it's fake news,” added Earhardt. “So let's move on to talk about something that you all care about. That's the wall. And that's keeping America safe.” And move on they did, with second-hour segments focusing on how “FBI texts revealed pro-Clinton bias” and how former President Barack Obama had taken undue credit for economic growth in the U.S.

Then around 7:30 a.m., the hosts turned to someone else who is paid to defend the president, White House senior communications adviser Mercedes Schlapp, to briefly discuss the story. Doocy introduced the interview by claiming that the story said that Trump had asked McGahn to fire Mueller and McGahn had replied, “You know what, I’m not going to do that, it would be bad politically,” presenting it as a simple dispute rather than, as the Times reported, McGahn threatening to quit rather than carry out Trump’s order and the president backing down.

Here are Doocy’s “questions” on the subject to Schlapp, who admitted she hadn’t actually talked to the president about the incident:

And that was basically it on the subject. The rest of the hour featured important stories like a report that John Kerry is considering a 2020 presidential run. And the 8 a.m. hour was largely consumed by the hosts previewing, airing live, and then praising the president’s remarks at Davos.

*Figure does not include brief video teaser montages at the top of the 6 a.m. and 7 a.m. hours or passing mentions in unrelated segments.