Ford has debunked the claim, saying there’s “zero chance that I would confuse them.” Though Whelan later deleted his tweets and apologized for identifying the supposed doppelganger, he hasn’t retracted his theory.

In the days before Whelan tweeted his ridiculous theory, other conservative media figures and even a Republican lawmaker speculated that Ford was mistaken about who assaulted her. A Wall Street Journal editorial published on September 17 with the title “The #MeToo Kavanaugh Ambush” claimed, “Mistaken identity is also possible.” The same day, Fox News The Five co-host Jesse Watters speculated, “Maybe it was a case of mistaken identity.” And Sen. Orrin Hatch (R-UT), who sits on the Senate Judiciary Committee, suggested Ford is “mixed up.” On September 18, conservative Washington Post columnist Kathleen Parker wrote that “as crazy as that sounds, it wouldn't be unheard of” for this to be just a matter of “mistaken identity,” in a column titled “Is there a Kavanaugh doppelganger?”

But it was Whelan’s now-deleted thread of tweets, posted on September 20, that spread throughout conservative media. Those who promoted it include:

Fox & Friends co-host Steve Doocy: Whelan “figured out what house it may have happened at, because it was a house closest to the golf course, and then realized whose house it was and looked at a picture of the young man who lived there at the time who was a classmate of Mr. Kavanaugh's. Put up side by side images, they look a lot alike.”

While I am still not convinced there was an assault on Professor Ford, an intriguing theory has come forward that embraces the idea she was assaulted and makes a far more plausible case than that Brett Kavanaugh did it.

Ed Whelan of the Ethics and Public Policy Center decided to put up a more compelling story that embraces Ford's theory of assault, while filling in the details she provided. And while I continue to find it unseemly to drag another innocent person into a fraudulent claim, the facts are very compelling that this is the location and things make more sense if you assume Ford was assaulted.

The facts, as Ed Whelan laid them out, are that Brett Kavanaugh did go to school with someone who has a striking resemblance. That person lived within walking distance of the club Ford claims she had been at. The home matches the limited description Ford provided. I suspect more information will roll out as well over the coming days.

I continue to believe Ford's accusation is not credible. If you find it credible, Whelan's evidence is compelling unless you're just trying to stop Kavanaugh for partisan or ideological reasons. 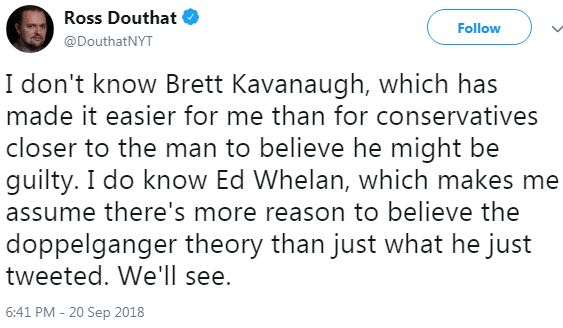 Accuser Christine Blasey Ford is waging a war on Trump’s SCOTUS nominee Brett Kavanaugh with decades-old, unsubstantiated claims of sexual assault in an effort to derail his confirmation to the Supreme Court.

Judge Kavanaugh has categorically denied the allegations and even told Senator Orin (sic) Hatch he wasn’t at the party in question.

Earlier today, Twitchy covered the ‘rumor’ that information had been obtained that some felt would 100% exonerate Kavanaugh. This originally stemmed from tweets Ed Whelan sent out in the first part of this week.

Welp, looks like Ed made good on his claim and posted a thread of facts that would give anyone pause as to what really did and did not happen to Ford and could eventually prove Kavanaugh’s innocence.

Keep in mind, we can neither confirm nor deny anything Whelan has stated in his bombshell thread.

A new theory has emerged in the case of whether Supreme Court nominee Brett Kavanaugh sexually assaulted accuser Christine Blasey Ford roughly 35 years ago; it was Kavanaugh's high school look-alike, whose high school house better fits Ford's description, and who kept in touch with the other guy allegedly in the room, Mark Judge.

The theory was presented Thursday afternoon by Ed Whelan, a former clerk to USSC Justice Antonin Scalia and currently president of the Ethics and Public Policy Center (EPPC), a conservative think tank.

Ford has been traumatized by the memory of sexual assault for 35 years. She sought therapy in 2012 due to the horrible memories. No one would go to all that trouble for nothing. Something happened to her.

I couldn’t wrap my head around this story. What happened here? There had to be an explanation. Something I was missing. Then I read a story today that closed some loopholes for me. Below is the story I read.

Please note that I am in no way stating that this is true. We have no idea what happened to Ford back when she was a teenager. This is just one idea, one possibility. Keep in mind that Ford can’t remember much about the details. It was a long time ago. This is why Kavanaugh should have never been put through this. He and his family are suffering, and Ford has no facts to base her allegations on.

It looks like the case brought against Judge Brett Kavanaugh just took another serious hit. The Washington Post reported that Ed Whelan, a former clerk for the late Supreme Court Justice Antonin Scalia and the president of conservative think tank the Ethics and Public Policy Center (EPPC), said “compelling evidence” which apparently includes photos and maps would exonerate Kavanaugh from allegations brought by Christine Blasey Ford.

Paul (and Senator Orrin Hatch) has already mentioned the possibility that Dr. Ford’s allegation of sexual assault by Brett Kavanaugh may be a case of mistaken identity, based in part on Ed Whelan’s cryptic tweets that Kavanaugh is going to be fully exonerated. This has set off a firestorm of rumors and expectations. Whelan has just now (6 pm eastern time) provided one specific scenario of this on Twitter, offering up a specific name (though careful to note that he makes no allegation of implication that the other person, Chris Garrett, assaulted Ford as claimed).

Read the whole thread—it doesn’t take long, but it is not easily summarized here.