Fox & Friends is once again carrying water for Immigration and Customs Enforcement (ICE) by fudging the agency’s record on arresting immigrants with criminal records and denying that a pizza delivery driver was arrested while doing his job.

On the August 10 edition of the show, co-host Brian Kilmeade repeatedly claimed that “nine out of every 10” immigrants that ICE arrests “have criminal records.” When asked where he got that statistic from, he cited former ICE acting director Tom Homan.

But that statistic from the Trump administration is misleading, as CNN explained in March. CNN reported that the administration was conflating immigrants with deportation orders with those who have actual criminal records to come up with the number Kilmeade cited:

The Trump administration has subtly blurred the distinction between criminals and those with final orders of removal, which is a civil, not criminal charge.

ICE has combined “ICE fugitives” -- people who have been ordered to leave the country but haven't yet -- with convicted criminals who have pending criminal charges and reinstated final orders of removal, allowing the agency to say 92% of those arrested under Trump had criminal convictions or one of the other factors -- when the number with criminal records is closer to 70%.

As a May USA Today report showed, it was in the last two years of the Obama administration that almost nine out of 10 (87 percent) undocumented immigrants arrested had actual criminal records. But under Trump, nearly one-third of ICE arrests are of immigrants with no criminal record: 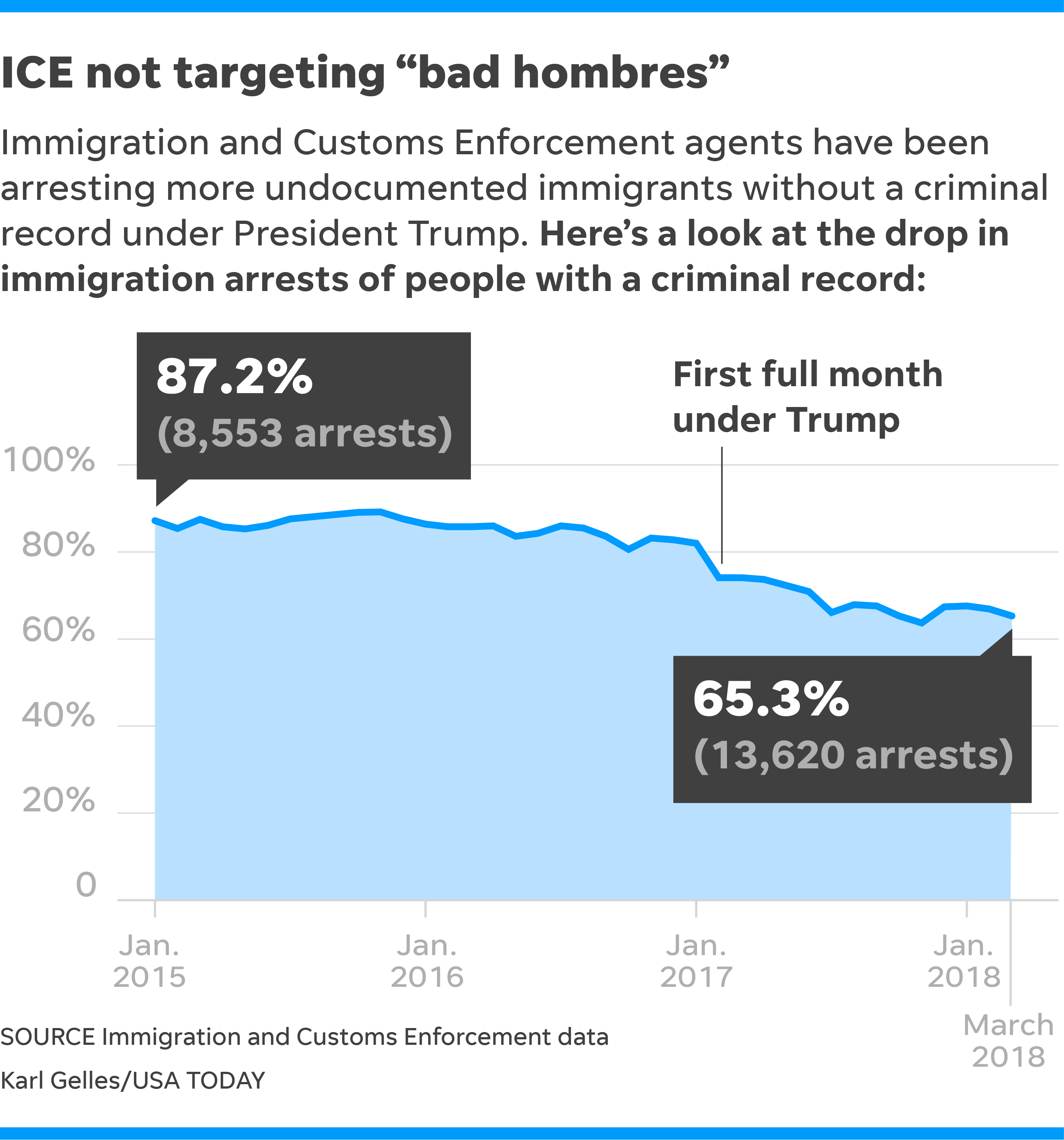 Kilmeade also mocked Fox correspondent  Geraldo Rivera for saying that ICE officials get tempted “to go for the low-hanging fruit” and “they sweep up the poultry processing people, the meat-packing people, the pizza delivery guys.” Kilmeade scoffed at Rivera’s comment, saying, “We don't call Domino’s and then arrest the delivery guy. It’s nine out of 10 have a criminal record.” But ICE did arrest a pizza delivery person in June while he was on the job. And Fox News covered it.

GERALDO RIVERA (FOX NEWS CORRESPONDENT-AT-LARGE): ICE is at least two agencies. I have spoken about this before in a limited way. But there are the ICE investigators. They are the guys that bust the cartels. They go after the transnational gangs. They go after MS-13, they go after the racketeers and the drug smugglers. And then there’s the enforcement and removal side of ICE. Those are the far more unpopular group. That’s the one who smash in the doors, and there’s Diego, he’s been here 20 years, and they take him out and deport him.

BRIAN KILMEADE (CO-HOST): Nine out of every 10 have criminal records.

RIVERA: I don't know where you get that statistic.

RIVERA: Well, I want to see an objective review of that. I do not believe that. I think that the -- too often there is a temptation to go for the low-hanging fruit. That’s when they sweep up the poultry processing people, the meat-packing people --

KILMEADE: We don't call Domino’s and then arrest the delivery guy. It’s nine out of 10 have a criminal record.