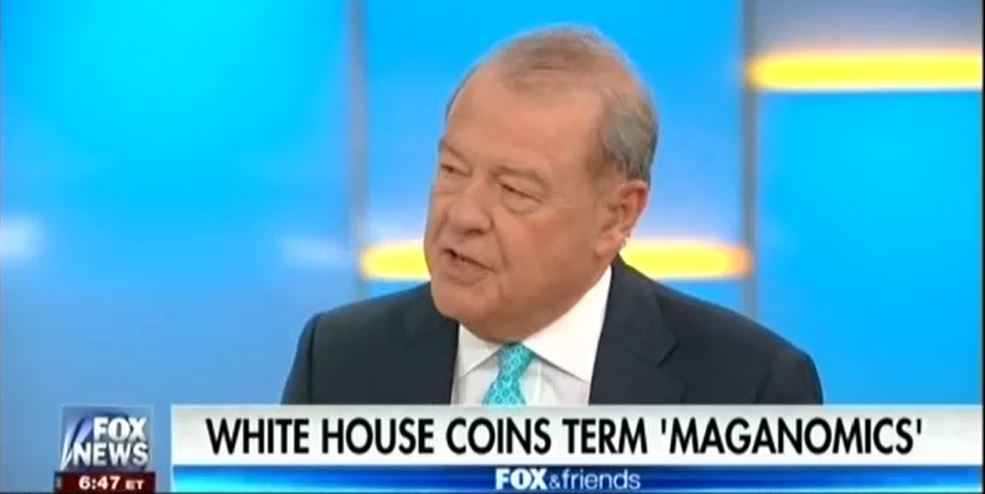 Fox Business host Stuart Varney celebrated the first six months of the Trump administration by ridiculously claiming that the election and inauguration of President Donald Trump are responsible for adding trillions of dollars to the economy and lifting wages for low-income workers around the country. Varney’s claims are the latest in a long-running right-wing media fantasy that the Republican Party’s economic agenda will unleash the American economy, which conveniently ignores more than six years of steady economic progress under the Obama administration.

On July 20, Trump celebrated the six-month anniversary of his inauguration as president of the United States. By any objective measure, Trump’s presidency has already been one of the strangest and most chaotic in living memory. The Trump administration is consumed by scandals of its own making, and, according to a Washington Post report published on Trump’s six-month anniversary, the president is beginning to ask his political and legal advisers “about his power to pardon aides, family members and even himself.”

Despite these facts, the team at Fox News and Fox Business attempted to find a silver lining for the Trump presidency by falsely crediting his administration for the continued overall health of the American economy. In a July 20 op-ed published by FoxNews.com and a corresponding segment on Varney & Co., host Stuart Varney credited Trump with “add[ing] $4.1 trillion to the nation’s wealth” thanks to a post-election stock market rally. Varney also preposterously claimed that “during [Trump’s] presidency,” long-established American tech giants “Apple, Amazon, Alphabet, Microsoft and Facebook” have “emerged as global technology leaders.” Varney’s ridiculous claims were promoted by the network’s social media accounts and parroted again from the Trump-friendly confines of Fox & Friends during a segment in which Varney also credited Trump for wage growth witnessed by low-income workers. From the July 21 segment:

Fox’s claim that Trump is responsible for low-income wage increases stems from a July 20 Wall Street Journal article, which said that “full-time earners at the lowest 10th percentile of the wage scale” witnessed a 3.4 percent year-to-year wage increase in the second quarter of 2017, according to data from the Department of Labor. Contrary to Fox’s argument that Trump deserves credit for the increase, the Journal pointed to consistently low unemployment rates and minimum wage increases enacted by states and municipalities across the country as primary drivers of the uptick, which continued an accelerating wage trend for low-wage workers dating back to 2015. Minimum wage increases have been found to correlate with significant gains to low-income earnings, as the Massachusetts Budget and Policy Center (MassBudget) reported on September 5, and 19 states increased their minimum wages at the beginning of the year: 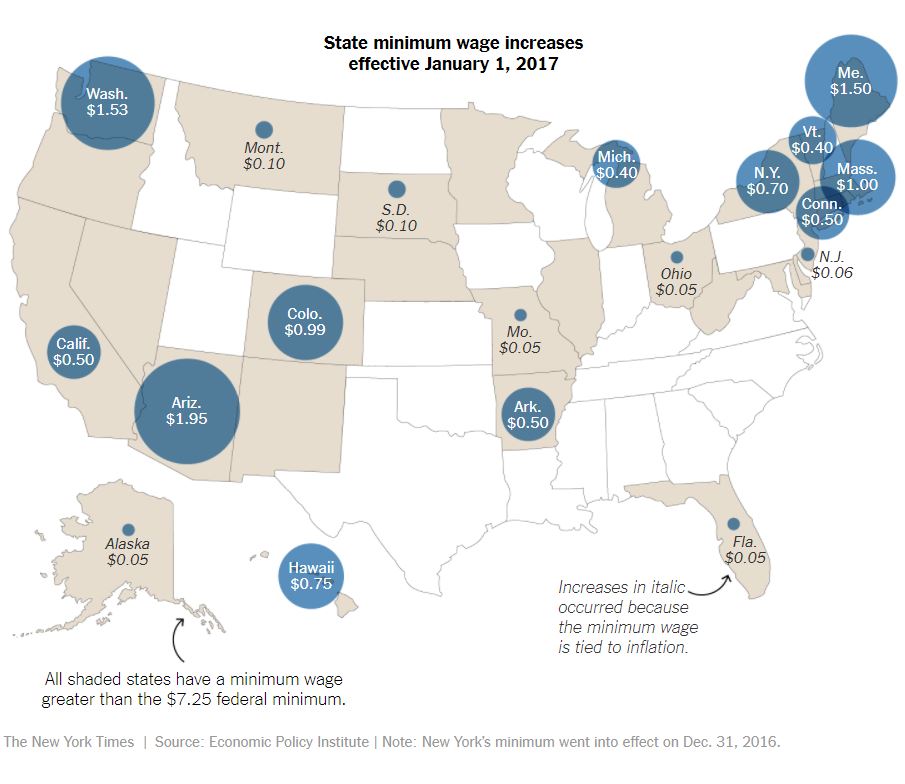 In addition to falsely crediting Trump for years-long wage growth trends, the team at Fox News also claimed that Trump is responsible for a $4.1 trillion increase in stock market capitalization since Election Day, citing the Wilshire 5000 composite index. It is true that American stock markets have gained value since November, but as CNN business correspondent Christine Romans pointed out last month, stocks had been gaining value for years before Trump’s election. Indeed, the Wilshire 5000 index, like other major stock indices, has been consistently climbing since bottoming out in March 2009 in the midst of the Great Recession and financial crisis.

Fox’s promotion of Trump’s supposed economic success was not lost on the network’s number one fan, as the president posted a video of Varney’s celebratory July 20 segment on Twitter just this morning:

Fox has repeatedly pushed misleading economic data to hype Trump since the start of his administration, and the network has even fought against increased minimum wages, which are partly responsible for the wage growth its hosts now celebrate. Fox’s sycophantic devotion to Trump runs so deep that Varney even once admitted his unwillingness to criticize the president, a complete reversal from the tone of his coverage during the Obama administration.