When St. Louis Rams draft Michael Sam kissed his boyfriend in celebration of his historic selection as the first openly gay active NFL player, there were predictable protests of homophobic disgust on social media.

The kiss also raised the ire of Fox News, where commentators condemned the kiss as “in your face” and “over affectionate.” It's a reaction that highlights the way that modern homophobia can manifest in dishonest calls for “appropriate” behavior.

Commenting on Sam's selection on the May 12 edition of Fox & Friends, Donald Trump essentially set the tone for the network's response, noting that many people thought Sam's kiss was “inappropriate” and stating that he personally thought it was "out there a little bit":

The show's hosts didn't ask Trump to weigh in on this sports-related kiss.

On the May 12 edition of The Five, co-host Andrea Tantaros criticized Sam for being “overly affectionate on camera,” but avowed that she doesn't like to see public displays of affection by anyone. Bill O'Reilly sounded the same theme on his show that night, saying that “there's no kissing in football” - nobody tell Tom Brady and Gisele Bundchen - and affirming that he opposes public displays of affection between straight people, too.

O'Reilly argued Sam's "gay thing" was “way overplayed,” “annoying,” and “in your face.” “Do I really need to see that?” O'Reilly asked. Fox contributor Juan Williams agreed, stating that he, too, found Sam's kiss to be a little too “in your face.” 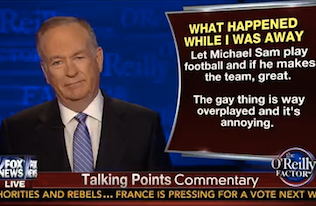 Perhaps the least self-aware reaction came from Fox News Latino contributor Rick Sanchez, who penned a May 13 column asserting that, while he supports gay rights, Sam's kiss “set back the cause of the LGBT movement.” Dubbing the kiss a “cake suck,” Sanchez falsely claimed that Sam “lick[ed]” cake off his boyfriend's face in a flagrant “affront to the NFL's culture”:

Sam's behavior was an affront to the NFL's culture. And it had nothing at all to do with his being gay. If a straight man got drafted on national television, then spread frosting on a woman only to then lick it off for all to see, I'd be writing how he embarrassed himself and the NFL and diminished the accomplishment of being drafted. But people are afraid to say the same about Sam for fear of being seen as homophobic. The double standard is not in talking about Michael Sam, but in avoiding talking about him and how he carried himself at the expense of other gay Americans who tweeted over the weekend about how disappointed they were in his spectacle. CNN, who spent the entire day reporting on the blowback, must have missed those tweets.

Seen through the prism of the NFL, the issue I have with Sam's behavior is that it was his way of saying, “the rules don't apply to me.” And how can the NFL do or say anything about it without now appearing homophobic?

That second prism - the prism of how straight Americans view gay Americans - is even more important.

A straight couple wouldn't suck cake off each other while surrounded by cameras as families and children watch what is essentially a sports event. If they did, we would be just as surprised and shocked.

The gay community has fought to be treated equally, to be seen just like all Americans. And they should be!

Michael Sam had a unique opportunity to show just how alike gay and straight people really are. Instead, he did something that one would expect to see in an SNL parody of a gay football player, something no one would ever believe could happen in real life. Sam created (or at least fed into) the caricature of the flamboyant, outrageous gay man, feeding into an ugly and dangerous stereotype that needs to go away. And therein lies the problem. Sam took attention off the sport, off his accomplishments as an athlete, off the unimportance of his happening to be gay. [emphasis added]

Sanchez's reaction to Sam's kiss is perhaps the clearest demonstration of the not-so-subtle homophobia that undergirds Fox's calls for “appropriate” behavior. Worrying about “families and children” saw the kiss, calling Sam “flamboyant” and “outrageous,” describing a kiss as a “cake suck” - all of these devices are meant to stigmatize gay displays of affection as intrinsically indecent, taboo, and over-sexualized. In other words, Fox's backlash to Sam's kiss is premised on the same stereotypes and stigma about gay sexuality that has motivated more vocal opponents of LGBT equality for decades.

When people like O'Reilly and Sanchez ask Sam not to kiss his boyfriend, what they're really asking is that he not demonstrate even the most basic evidence of his sexuality. He can be gay, as long as he's never actually being gay.

As Slate's Mark Joseph Stern observed, that problematic expectation highlights precisely why it's essential for more gay couples like Sam and his boyfriend to be unashamed about kissing their partners. As Stern noted, public discomfort with homosexuality used to be the reason gays were told to keep themselves closeted. Now, as conservatives are forced to dress their homophobia in more accepted terms, it's being used to tell them how they can express their love. It's an encouraging sign of the way that conservative media is (slowly) adapting to the realities of homophobia's unacceptability. But it's also a disturbing reminder of the way that anti-gay animus can cloak itself by posing as a principled call for “appropriate” behavior.