Fox News employees struggled to wrap their head around Facebook's decision to allow users to choose from a number of different terms to describe their gender, with one Fox News reporter asking “what if you identify as a pine cone?”

On February 13, Facebook announced that it would begin offering its users the ability to choose from a wider range of terms to describe their gender, including “transgender” and “cisgender.” As Facebook software engineer Brielle Harrsion told the Associated Press, the change “means the world” to many Facebook users:

“All too often transgender people like myself and other gender nonconforming people are given this binary option, do you want to be male or female? What is your gender? And it's kind of disheartening because none of those let us tell others who we really are,” she said. “This really changes that, and for the first time I get to go to the site and specify to all the people I know what my gender is.”

At Fox News, the change was met with confusion and mockery. During the February 14 edition of Fox & Friends, several Fox News employees joked about the proposed changes:

Fox News Radio reporter Todd Starnes criticized the changes on his Facebook page, asking "what if you identify as a pine cone?": 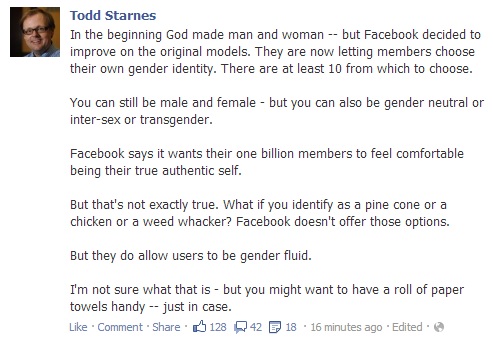 It's not the first time the network has mocked attempts to properly identify transgender people. In 2011, Fox & Friends criticized the Australian government for offering alternate gender descriptions in passports. The network has a history of proudly misgendering transgender people, so it's no wonder that Facebook's move to better accommodate the transgender community is met with bewilderment on Fox.