Fox News published an op-ed by Hannah Scherlacher, from the conservative media outlet Campus Reform, and later hosted her on television to push a false claim that she was added to a “hate-list” designated by the Southern Poverty Law Center (SPLC). In fact, Scherlacher was not added to any hate list -- she was simply included in a list SPLC posts regularly of guests who had appeared on a radio program of the anti-LGBTQ hate group Family Research Council. Right-wing media outlets parroted Scherlacher’s false claim, saying she’d been “defame[d].” 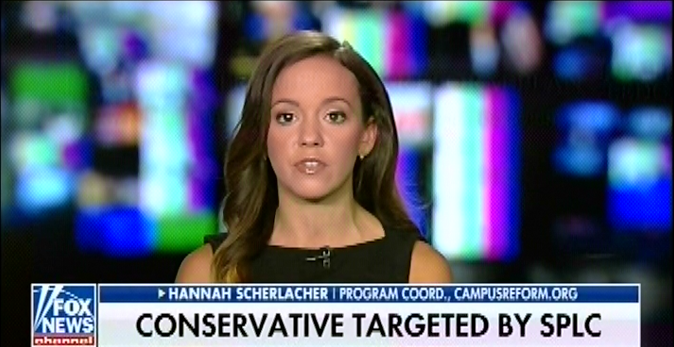 FoxNews.com ran an op-ed from a Campus Reform contributor falsely accusing SPLC of placing her on a hate list and saying, “Enough with the hate labels.” FoxNews.com ran an op-ed by Hannah Scherlacher, a contributor to right-wing news outlet Campus Reform, saying she was “targeted” and bullied by the Southern Poverty Law Center (SPLC) and accusing the organization of placing her on an “LGBTQ hate-list.” Scherlacher claimed she was “labeled an LGBT-hater just for being a guest” on a radio show produced by the anti-LGBTQ hate group Family Research Council (FRC). Scherlacher called the “hate group” and “extremist” labels “a bullying tactic employed by the left to silence conservative ideas” and to “paint any opposition to the far left as morally depraved.” She continued, “I will now have to explain to every future employer why my name is on a hate list,” later calling on SPLC “to remove me from this list.” From FoxNews.com’s September 29 op-ed:

Nazi. Fascist. Misogynist. White supremacist. These are some of the most hateful terms around, and yet they are freely lobbed at anyone who even slightly diverges from the left’s worldview. This fall, I became the one targeted by exactly this sort of bullying at the hands of the Southern Poverty Law Center.

It’s an understatement to say that I was dumbfounded as to how I ended up on the Southern Poverty Law Center’s (SPLC) LGBTQ hate-list — I have never said or done anything to indicate hate for the LGBTQ community. When I called to inquire, SPLC informed me that I am guilty because I did a radio interview with Family Research Council Radio (FRC). I am a program coordinator for The Leadership Institute's Campus Reform. org. The segment was about socialism, but because FRC holds traditional family values, I was labeled an LGBT-hater just for being a guest on the show. No LGBT topics even came-up.

SPLC’s hate-list exemplifies a bullying tactic employed by the left to silence conservative ideas. Regardless of the issue, support for the conservative point of view results in a litany of hateful labels and reputation-smearing. The goal is to paint any opposition to the far left as morally depraved and, therefore, unworthy of being included in conversation.

While I am lucky to have a current employer that is understanding of this injustice, many others are not willing to give the benefit of doubt. I will now have to explain to every future employer why my name is on a hate list. If there’s one thing I gained from this, it’s a newfound respect for conservative students who face this type of mistreatment every day on campus.

I am calling on SPLC to remove me from this list and stop engaging in the game of identity fear politics. I urge all Americans who have been bullied, silenced, and pushed into a corner by radical groups like the Southern Poverty Law Center to push back too. [FoxNews.com, 9/29/17]

Fox & Friends Weekend hosted Scherlacher, and host Pete Hegseth said SPLC designated her “an enabler of hate.” Hannah Scherlacher appeared on the September 30 edition of Fox & Friends Weekend to discuss her op-ed. During the interview, host Pete Hegseth claimed that Scherlacher had “been designated by the Southern Poverty Law Center as an enabler of hate.” Scherlacher questioned how she “got on an anti-LGBT list” but did note that SPLC questioned her assertion that she was on a list, saying, “Southern Poverty Law Center responded to the article I wrote by debating the semantics of which list I was on.” From the episode:

Hannah Scherlacher just wrote about the experience. She says the bullying tactics against conservatives need to stop. Hannah Scherlacher is joining us now. She’s the program coordinator for campusreform.org, and she joins us live. Hannah, thanks for joining us this morning. So, just to get the facts out there, you were on a radio program hosted by Tony Perkins. He runs the Family Research Council. You did an interview. It must have been about something hate-related, right? If you’ve been designated by the Southern Poverty Law Center as an enabler of hate. What was the topic of that radio interview?

HANNAH SCHERLACHER: The topic was about socialism. So, how I got on an anti-LGBT list is beyond me. Southern Poverty Law Center responded to the article I wrote by debating the semantics of which list I was on. But you know, bottom line, when anyone is placed on any of Southern Poverty Law Center's list, the message is clear. It's a memorandum to their supporters that I am the enemy. And they are willing and ready and working to do anything to dispose of conservatives' First Amendment rights, and this time I was the target. But for millions of Americans, this is their story too. Just look at how SPLC labeled Dr. Ben Carson or Dr. Carol Swain, who is an African-American professor at Vanderbilt, who was labeled a white supremist (sic) sympathizer. So, there’s no credibility, and groups like this are dangerous. They’re reckless and irresponsible in labeling people as haters. And it has serious implications for not only their careers, but their safety. [Fox News, Fox & Friends Weekend, 9/30/17]

Scherlacher’s claims are entirely untrue, as she has not been been (sic) placed on the SPLC’s list of anti-LGBT hate groups but was merely once mentioned in passing in one of its “Anti-LGBT Roundup of Events and Activities” posts.

The SPLC has designated the Family Research Council as an anti-LGBT hate group and as part of its coverage of FRC’s work, the SPLC simply noted who had appeared on FRC’s radio program in previous weeks[.]

That one listing is the only mention of Scherlacher on the SPLC’s website, rendering her complaint that she was unjustifiably placed on “the Southern Poverty Law Center’s (SPLC) LGBTQ hate-list” and “labeled an LGBT-hater” laughably untrue. [Right Wing Watch, 9/29/17]

The Southern Poverty Law Center (SPLC), which grossly misrepresents and recklessly labels Christian, pro-family and conservative nonviolent groups as “hate groups,” has added Hannah Scherlacher, the program coordinator and a contributor for the Leadership Institute’s CampusReform.org, to its so-called “hate list.”

“Hannah Scherlacher is helping to expose bias and left-wing abuse on America’s college campuses and now she has become one of the Southern Poverty Law Center’s ‘hate list’ victims,” said Mat Staver, Founder and Chairman of Liberty Counsel. “Neither Hannah Scherlacher or Family Research Council engage in or have a history of violence or hate. The SPLC has labeled them because FRC promotes traditional family values,” said Staver. [Southern Poverty Law Center, accessed 10/2/17; Liberty Counsel, 9/29/17]

FRC: SPLC “Falsely Defames Another Person, and She’s Fighting Back.”

SPLC is a hate group. https://t.co/c9GdwCSg16@h_scherlacher