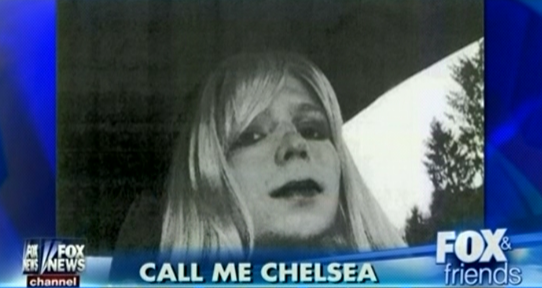 Fox News continued its transphobic attacks on Private Chelsea Manning, deriding her fight for hormone therapy as a bid for “special treatment” and suggesting that “he” had “already cost us enough” while ignoring expert opinion that hormone therapy is essential for transgender people.

The Pentagon reportedly is drawing up plans to transfer Manning, currently serving a 35-year sentence for leaking documents to WikiLeaks, from a military to a civilian prison. In a civilian facility, Manning - formerly known as Bradley Manning - would be allowed to receive hormone therapy.

During the May 14 edition of Fox & Friends, co-hosts Steve Doocy and Brian Kilmeade misgendered Manning and trivialized her effort to gain access to hormone treatment. Teasing the show's report on the latest developments in Manning's case, Doocy asserted that Manning was seeking “special treatment” from the Defense Department, while Kilmeade asked, “he's already cost us enough, hasn't he?”:

In the report itself, Doocy continued to refer to Manning as a male:

What Doocy calls “special treatment” is, in reality, medically - and perhaps constitutionally - necessary. The American Civil Liberties Union has highlighted the “serious constitutional concerns” that would be raised by denying Manning medical treatment, noting that denial of treatment to gender dysphoria patients like Manning “can cause severe psychological distress, including anxiety and suicide,” thereby violating the Eighth Amendment's prohibition of cruel and unusual punishment. A federal appeals cout recently ruled that denying hormone therapy to inmates “serves no valid penological purpose and amounts to torture.”

Fox has ignored the expert consensus on transgender medical treatment before. In 2013, host Megyn Kelly dismissed a Massachusetts inmate's bid for gender reassignment treatment as a “get out of male prison free card.” Discussing the same inmate, Kelly and Bill O'Reilly mocked and misgendered her, lampooning the inmate' appearance and joking that the inmate didn't have to worry about sexual assault because she wasn't attractive enough. (In fact, transgender inmates are frequently targeted for sexual assault.) Kelly has also hosted Family Research Council President Tony Perkins to blast Immigration and Customs Enforcement (ICE) for its policy in support of hormone therapy for transgender detainees - a policy Perkins lambasted for allowing “cross-dressing as health care.”

Fox & Friends' jabs at Manning, meanwhile, are merely the latest in a long line of transphobic commentary the network directed at the Army private since she announced her gender identity last summer. Fox has repeatedly misgendered her, with Fox & Friends teasing an August segment on Manning with Aerosmith's “Dude (Looks Like A Lady).”