For the past year, Fox News’ daytime programs have incorporated a rather unorthodox feature into their headlines segments: live readings of social media reactions. Posts and comments -- presented in sets of three -- follow quick headline summaries, usually read out by Fox News headlines reporter Carley Shimkus.

All the comments originate from Twitter, Facebook, and Instagram, and the featured handles embody an eye-catching array of interests, from "Puppy Love 13622926" to "eatdog." Some comments feature dated anxiety shared by a particular Fox News host, while others present cultural criticisms just one spelling error shy of a brutal takedown. And some comments serve little purpose beyond providing general sycophancy for Fox News’ most powerful viewer. 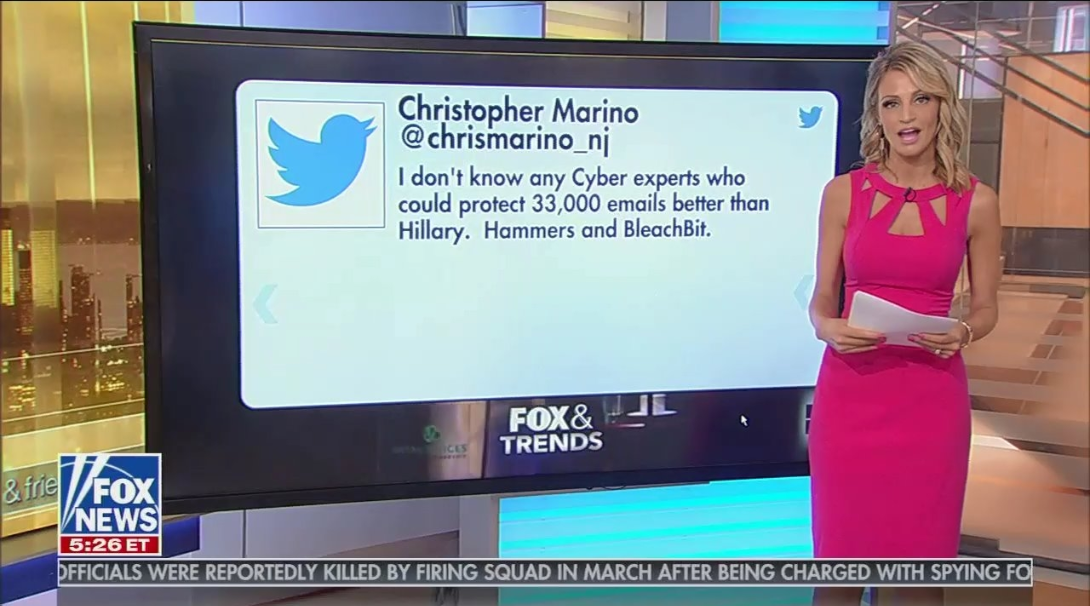 Airing social media comments is already a questionable journalistic practice at best. Putting social media reactions on a screen without vetting users or fact-checking claims -- even though they can include inaccurate information -- can undermine the reporting they’re discussing. But Fox’s approach presents additional concerns, because it at times also legitimizes accounts that display inauthentic and spammy social media behaviors and misrepresents reactions with little to no traction online as common opinions.

Media Matters reviewed all headline segments from Fox News programs between May 20 and June 20, 2019. We found 140 unique social media comments that aired during headline segments on Fox & Friends, Fox & Friends First, and Fox News’ Facebook Watch show Fox News Update. Almost all posts were replies or comments to posts containing news stories or viral social media content, and almost all were made by unverified Twitter, Facebook, and Instagram users. Most of these social media posts earned little to no interactions on their respective platforms. Most comments related to political or cultural news presented a right-wing viewpoint.

We also found multiple instances in this time period of posts and usernames that the network had edited, cut off, or doctored without noting the change. Media Matters has found evidence of the network engaging in this practice as far back as 2011, when the network displayed a tweet without showing the user’s image -- a racist anti-President Barack Obama avatar. The user lashed out in response, accusing the network of “going overboard” with political correctness. 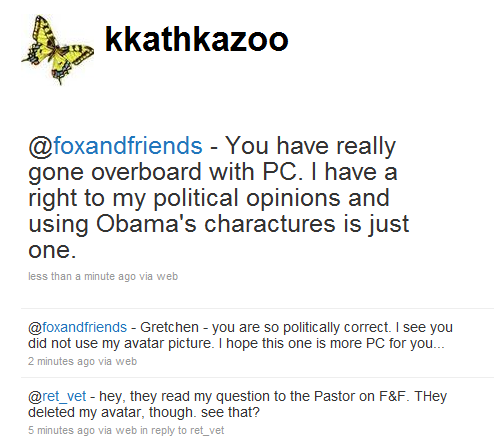 Though the aired tweets all appeared to be related to the corresponding headline on Fox News, most lacked prominence on corresponding platforms. Over half of the tweets we found had fewer than 10 interactions (as measured by likes and retweets). Sixteen of them didn’t earn any interactions at all.

The regular and arbitrary amplification of obscure accounts raises another issue in this already suspect practice: Is the network presenting the takes of automated accounts as if they belong to real people? In addition to looking through tweets, we reviewed the profiles and timelines of all handles that appeared on Fox News’ headlines segments. We found some examples of handles that consist of or include eight-digit numbers (a pattern sometimes indicative of computer-generated accounts). Accounts Fox aired also often exhibited spammy behaviors like “sending large numbers of unsolicited replies” -- in this case, specifically to tweets from verified news outlets or media and political figures. Some of these accounts seemed to only retweet accounts in support of President Donald Trump.

Fox News isn’t careful about whose posts they put on screen. In March, the network managed to feature an account dedicated to posting about the “QAnon” conspiracy theory, in which the username and handle both clearly contained the word “QAnon”. And the issue goes beyond negligence; Fox News has previously altered usernames to make suspicious accounts appear more authentic. On at least two occasions outside of the period we reviewed, Fox News altered the names of two different Twitter handles (“Tea~” belonging to @T35346788 and “TF1877” belonging to @TF1877), changing both of their names to the much more human sounding name “Tee.” 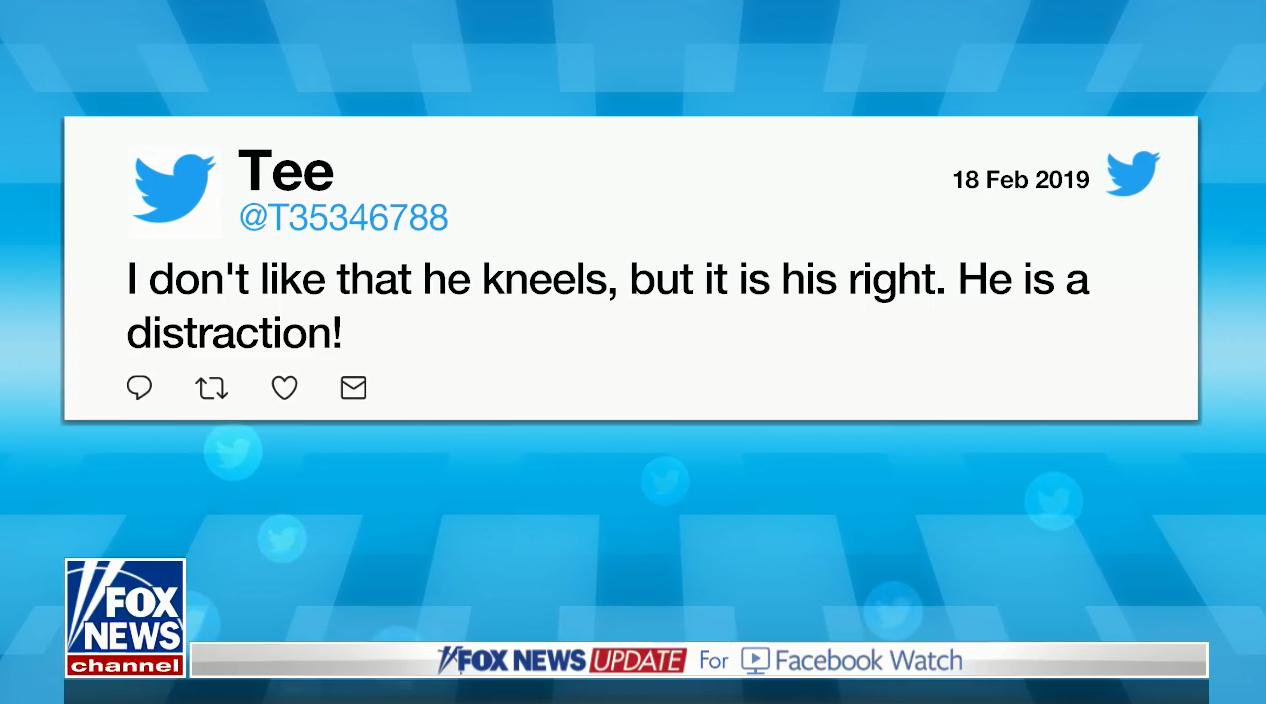 In addition to usernames, Fox News has altered tweets, sometimes cutting them off without indicating that it has made a change. One tweet Fox News showed, which said left-wing people “under report” the number of Trump supporters in the country, was cut off on the screen just before the user declared their support for Trump, writing, “We are truly the SILENT MAJORITY!!! #TRUMP2020.” Another tweet aired during a headlines segment -- from a handle which exhibits spammy behavior, in part by including a hashtag related to the account’s name (#socialghost) in almost every tweet it posts -- was presented with the hashtag removed. And Fox restructured the phrasing and changed the punctuation in a tweet sent by an account with no profile picture and exactly one follower.

Fox provided a clear map to the tweets it aired, displaying on-screen handles, dates, and (mostly) correct tweet content, all easily searchable on Twitter. But for comments that originated on Instagram and Facebook, the search for sources was much more difficult. When Fox News airs Facebook comments, it credits them only to a username; for Instagram comments, it credits a user handle. Fox doesn’t include any details about which posts the reactions it’s promoting are commenting on. Media Matters cast a wide net, checking all Instagram and Facebook accounts affiliated with headlines reporter Shimkus, Fox News' morning shows, and the network's main accounts. All posts we found came from Fox & Friends First’s accounts. We found all but three of the posts corresponding to aired Facebook comments but only 75% of the posts corresponding to aired Instagram comments.

Most of the Instagram and Facebook users aired had private accounts, making it impossible to assess the authenticity of their online behaviors. But like with the tweets aired, Fox changed some of the Facebook comments it displayed. Five Facebook posts were edited.

The prevailing issue with the Facebook and Instagram comments Fox aired is that they mostly reflect the far-right views and misinformation espoused on the network. In response to the release of Taylor Swift’s LGBTQ-centered music video, an aired comment claimed that Swift was alienating half of her audience. A comment responding to the Fox & Friends First question “What do you want to see the president accomplish if re-elected?” pushed the vaguely conspiratorial desire to “expos[e] the Dems until the WHOLE country wakes up.” One called Harvard University a “liberal college” in response to its withdrawal of former Turning Point USA official Kyle Kashuv’s admission in light of his past racist comments.

Other displayed comments denied there is a gender pay gap and baselessly claimed 90% of Trump media coverage is negative. None of the supposed facts articulated in these comments contain any sort of substantiated claims, but Fox News still presented them to its viewers without fact checks or context.

Leaving aside all details about the criteria Fox is using to pick the comments it amplifies, who it’s amplifying, and the baseless content of these comments, the question remains: Why is Fox News airing its comments section? Perhaps it’s because leaning on social media reactions allows Fox to push its agenda without incurring the same liability an on-air personality would risk. Regardless of intent, Fox’s filter-free headline segments are a perfect way for automated accounts and disinformation to jump mediums, moving from social media obscurity to national TV.