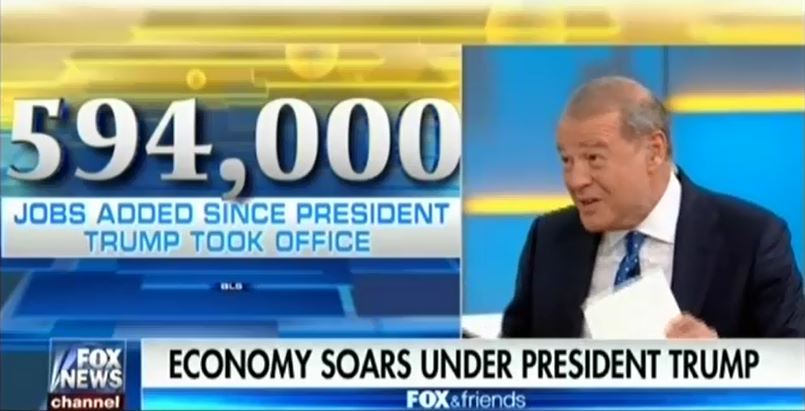 President Donald Trump took to Twitter on June 11 to echo misleading claims from Fox News that job growth in his first four full months in office was proof of his economic success. Both Fox and the president failed to notice, however, that it was the weakest February through May stretch of job growth since the end of the Great Recession.

On the June 11 edition of Fox News’ Fox & Friends Sunday, co-host Clayton Morris and economist Peter Morici claimed that Trump’s presidency had been a boon for the economy, hyped that 594,000 jobs had been created in Trump’s first four full months in office, and slammed media outlets for reporting that Trump’s economic agenda has stalled. Roughly an hour later, the president started tweeting what seemed like talking points pulled from the Fox segment. He decried mainstream reporters, whom he derisively labeled “fake news,” in a tweet claiming media outlets refuse to report “great economic news” since he was elected. Trump continued by boasting that the economy had added “600,000+” jobs:

...way up. Regulations way down. 600,000+ new jobs added. Unemployment down to 4.3%. Business and economic enthusiasm way up- record levels!

According to the Bureau of Labor Statistics (BLS), the economy in fact created 594,000 jobs from February through May of this year. Projections for April and May are preliminary and subject to change, but by comparison to previously established trends for the same timeframe, Trump has little to boast about. More jobs were created during the same four-month window in each of the past seven years under President Barack Obama.

On June 12 edition of CNN’s Early Start host Christine Romans picked apart various aspects of Trump’s claims on the economy. Romans discussed that while the stock market has gone up since Trump was elected, it had been rising for eight years making the latest gains just “icing on what has been a very big, juicy cake.” Romans also noted that Trump’s job growth claims neglect to mention how job creation was slower than the last three years:

These simple facts did not stop the pro-Trump sycophants at Fox News from continuing to push their favorable talking points. On the June 12 edition of Fox News’ Fox & Friends, guest Stuart Varney laid out the same argument that Trump had tweeted and added that “it’s a disgrace” that news outlets had been focused on Trump’s scandals instead of giving the president credit for a strong economy. Later on Fox News’ America’s Newsroom, guest Melissa Francis again pushed the 594,000 jobs created between February through May as proof of a strong economy under Trump.

Since Trump was elected, Fox has pivoted from mischaracterizing reports on the economy to blast Obama to mischaracterizing reports on the economy to hype or defend the Trump administration. Fox personalities frequently heap praise on economic indicators weaker than those they had once excoriated. The network has also reversed completely on how it reports jobs data, giving Trump credit for jobs he didn’t even create, and reporting glowingly on job creation under Trump that had become routine under Obama.