Fox Business host Stuart Varney said that President Donald Trump “was right to tout" stock market growth that has taken place since his inauguration as one of his achievements, claiming that “it was his policies which created” the rally. However, Varney dismissed the February 5 Dow Jones 1,175 point drop as an overdue market “correct[ion],” saying that “presidents shouldn't stick into that kind of sell-off on a day-to-day basis” and advising Trump to “steer clear of that, please.” Varney’s comments continue a pattern of showering Trump with praise for a strong economy and stock market or defending his economic policies, while ignoring the six-plus years of steady economic growth under the previous president, Barack Obama, whose economic policies Varney frequently criticized.

Varney’s exhortations of “the Trump stock market rally” are misleading, as they fail to acknowledge that the growth continues the more than six years of steady stock market growth under Obama. From March 6, 2009, to November 7, 2016, the Dow Jones climbed about 11,632 points -- almost a 157 percent increase. 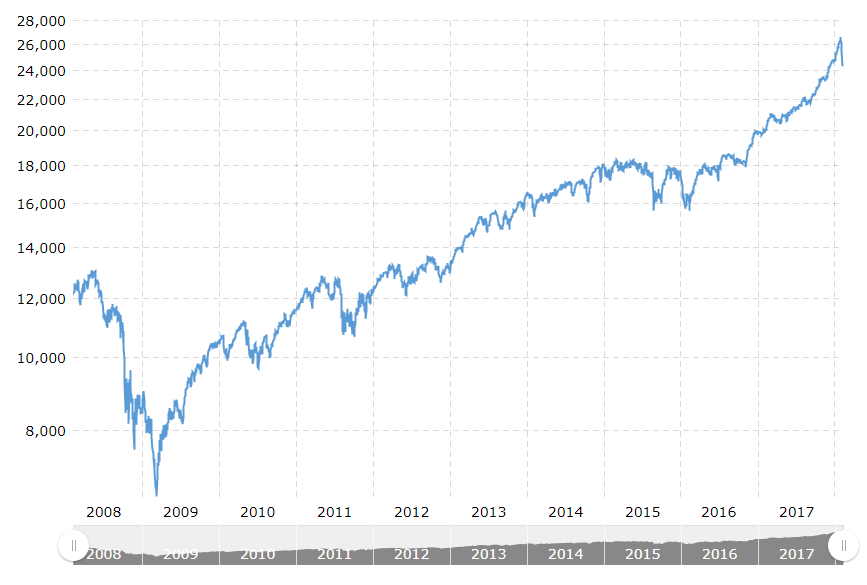 Even though Obama’s economic record directly contributed to the so-called “Trump rally” Varney praises, Varney frequently and bizarrely attacked Obama on the economy. True to what he himself has called his “very clearly partisan” nature, Varney even credited President George W. Bush for “fix[ing] the financial panic” when the 2007 Great Recession started and said “the economy fell off” on “Obama’s watch.” Varney also claimed that GDP figures in April 2017 meant a “bounce back” was on the horizon, but  that similar numbers in April 2016 meant we were “sliding toward recession.”

From the February 6 edition of Fox News’ Fox & Friends:

STUART VARNEY: It was a big sell-off, but let me tell you this right from the get go. A) the sky is not falling. B) there is no economic catastrophe on the horizon. C) the left is spinning this because they really want to associate President Trump with anything negative. D) did you hear that bit about “Oh, your retirement savings have been erased.” Nonsense. Your retirement savings are still up about one-third since the election of Donald Trump.

AINSLEY EARHARDT (CO-HOST): So this takes us back to December numbers. Still --

EARHARDT: But still better than the last administration, right?

VARNEY: But you’ve still got all the gains of 2017 very much in place. Look, there are two reasons why we got this big sell-off on our hands. Number one, we were due. The market has gone straight up ever since the election of Donald Trump.

VARNEY: Nothing goes up, straight up forever. All markets correct, period. You’ve gone from 18,00 to 26,000. OK, so now you’ve corrected at 24,000. That's what's happened. B) the economy is doing extremely well. And when the economy does well, interest rates tend to rise. Rising interest rates are not good news for the stock market. Hence, this sell-off yesterday. And you’ll get more selling at the opening bell today. It’s going to be an up and down day. Extreme anxiety today. How it closes, I don't know, but it probably will open lower.

KILMEADE: So the fundamentals of the economy are sound.

KILMEADE: But do you think the president will from now on will have a different approach to when the stock market goes up again, to maybe not get behind it? Because presidents in the past have stayed away from the market because of its volatility.

VARNEY: I think the president was right to tout the Trump stock market rally, because it was his policies which created the Trump stock market rally. I don't think he should say anything about this current sell-off. Presidents shouldn't stick into that kind of sell-off on a day-to-day basis. Steer clear of that, please, Mr. President. But by all means, take credit for the rally that you’ve seen so far.