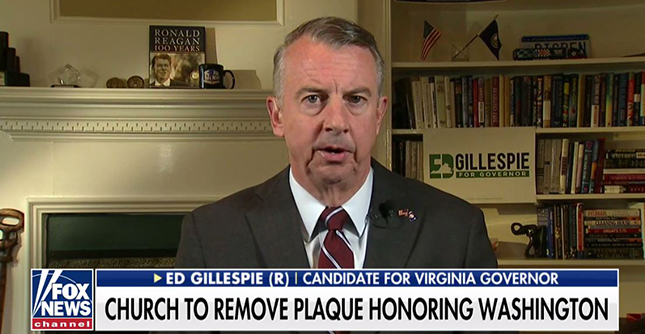 For days, Fox & Friends has been promoting a debunked story about a church in Alexandria, VA, supposedly removing a memorial plaque honoring George Washington, a parishioner of the church, because some find it “offensive.”

The October 29 edition of Fox & Friends Weekend and the October 30 and October 31 editions of Fox & Friends, which seem to have gotten the story from The Washington Times, featured deeply misleading segments questioning the decision of church leaders at Christ Church to remove a memorial plaque dedicated to the nation’s first president. Each segment largely glossed over the fact that Washington’s plaque is simply being moved because of its twin plaque commemorating Confederate Gen. Robert E. Lee, who also attended the church and who has become the subject of intense debate regarding public commemorations to those who rebelled against the United States government in the cause of secession and white supremacy. According to a statement from the church, the plaques are being moved together because they represent a single installation that is out of place in “the worship space” of the building and will be “relocated to a place of respectful prominence” where they can be viewed in the full context of the church’s “long and many-faceted history.”

Fox’s knee-jerk attempt to politicize the church’s decision, and the network’s attempt to obfuscate the removal of a plaque commemorating Lee by hyping the removal of a twin plaque commemorating Washington, marks another step backward in the network’s increasingly outlandish defenses of monuments to the Confederacy. Fox & Friends’ attempts to capitalize on the network’s ginned-up controversy culminated in a softball October 31 interview with Republican gubernatorial candidate Ed Gillespie, who used the issue to accuse Lt. Gov. Ralph Northam of seeking to erase Virginia's history. Gillespie has made defending Confederate monuments a core issue of his platform and has benefited from favorable coverage at Fox News and elsewhere in right-wing media. From the October 31 edition of Fox & Friends:

STEVE DOOCY (CO-HOST): Ed, where you're sitting right now, in Alexandria, that's the same city that we were talking about earlier today where at Christ Church, which is a church that George Washington himself attended, there is a plaque inside the vestibule that commemorates the fact that he was there. But they're taking it down because apparently it makes some people feel uncomfortable. What do you make of this? Because I know statues in Virginia -- another big topic this election cycle.

ED GILLESPIE: Well, obviously, I was disappointed by that, removing the plaque of George Washington at the church where he worshiped because people find it offensive. And that is another debate in this campaign. My opponent [Ralph Northam] is in favor of removing all historical Civil War monuments in the Commonwealth of Virginia. I think they should stay up. We should add historical context to them. And the fact is Virginia was front and center, obviously. Of course, we've been at the forefront of American history from the very founding here of Virginia and Virginians. Now, it doesn't mean we've always been on the right side. And in the Civil War, we were on the wrong side of history. But these statues around the commonwealth that commemorate those who served in the Civil War, I believe we should educate about them and teach about them. He wants to take them all down, and he made that an issue when he called for taking down and removing all of the statues. And when I disagree with that position, which, by the way, two-thirds of Virginians agree with me, you get attacked.