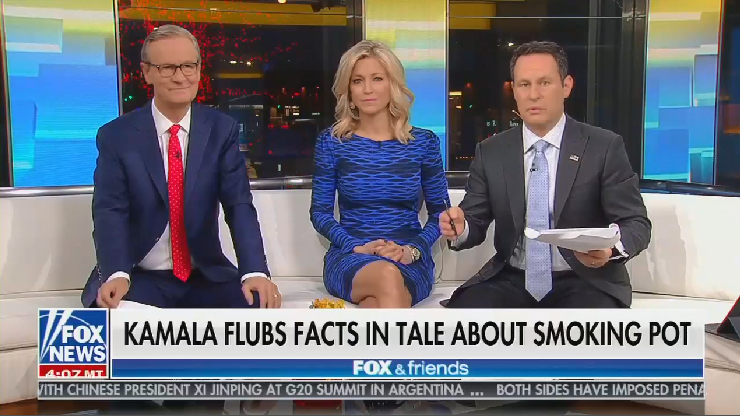 UPDATE (2/13): The Breakfast Club responded to conservative media’s smear of Harris, explaining that their conversation was misrepresented.

On February 11, presidential candidate Sen. Kamala Harris (D-CA) waded into the debate on marijuana legalization during an episode of the radio show The Breakfast Club. While responding to multiple questions, Harris revealed that she supports legalization and smoked in college. Harris also shared, in response to a question, that some of her favorite music artists include rappers Snoop Dogg and Tupac. While she was answering that question, one of the hosts further asked what she listened to when she was “high.”

Right-wing media figures decided to interpret the sequence as Harris clearly saying she smoked marijuana in college while listening to Snoop Dogg and Tupac, which they note wouldn’t be possible because their music wasn’t released until after Harris graduated from college. They almost immediately started trying to turn the trivial nitpicking of details into a big scandal for Harris, accusing her of maliciously lying about smoking marijuana in college. Wednesday morning, this attempt to scandalize the moment made its way to Fox News’ morning show Fox & Friends. The three co-hosts treated the story as a “gotcha” moment for Harris, saying that “there’s a problem with the timeline.”

The wanna-be scandal underscores a larger trend of figures on the right using misinformation to paint Democratic candidates as inauthentic and unrelatable.

BRIAN KILMEADE (CO-HOST): And then Kamala Harris came out and gave a very impressive introductory “look at me -- I want to run for president.” However, if you look at some of the things she is saying about giving insurance for everybody, destroying private insurance and giving Medicare-for-all, you wonder where that came from. Then she admits on a morning radio show that she smoked marijuana because she wanted to in college.

STEVE DOOCY (CO-HOST): She was listening to Snoop and Tupac when she was in college. We took a look at the record, and take a look at this. That was the appearance on the so-called world's most dangerous morning show, The Breakfast Club, here in New York. She graduated from college at Howard in 1986. She finished law school in 1989. She was admitted to the state bar of California in 1990 and then in 1991, Tupac's first album came out and in 1993, Snoop Dogg's first album was released. So there's a problem with the timeline.

DOOCY: So she doesn't remember what she was listening to when she was smoking.

KILMEADE: Right. I just don't know why -- she’s a scholar, her career is on a fast trajectory; she should embrace it, go behind it. Whoever you are, you have to be that person or it's not going to work. Did Donald Trump show you anything? For better or for worse, Donald Trump shows you exactly what he's doing every day and who he is.